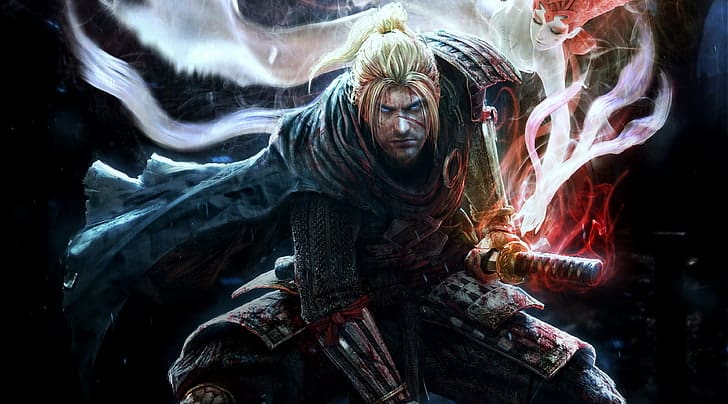 Ghost of Tsushima has just released exclusively for PS4. And, with its release, gamers are rushing back to samurai games. So, I decided to put together a list of the 5 best samurai games of all-time. These are in no particular order; I simply think these 5 games are the best games that the samurai genre can offer. Lets start with  one of the more recent releases on this list: Nioh.

Nioh might be best described to new players as samurai-themed Dark Souls. However, its not just a copy of From Software’s series with a different setting. While the difficulty of combat is high, the fighting system is very much Nioh’s own. The stamina concept implemented in the game forces players to work strategy into their duels with various enemies, and it works perfectly. And the story, set in 17th century Japan, is appealing and entertaining throughout, telling the tale of Irish samurai William Adams. Combining RPG elements, thrilling combat, and brilliant design, Nioh is one of the best samurai games money can buy. And its got a great sequel.

Way of the Samurai

Next, we have Way of the Samurai, a PS2 classic that has stood the test of time. While the graphics aren’t up to today’s lofty standards, other gameplay elements are still entertaining today. Particularly, the game features an excellent branching story. Because of the many potential endings and storylines, Way of the Samurai can be played over and over. Playing as the ronin Kenji is great fun even now, two console generations later. And the combat is interesting, with over 40 different sword types. Mastering each may take a while, but it adds to the depth of the game. Overall, Way of the Samurai is a classic that still ranks among the genre’s best.

Sometimes a game is just too good to be left out of a list. In this case, I’m talking about Sekiro: Shadows Die Twice. FromSoftware’s 2019 release won Game of the Year, and for good reason: the levels are excellently designed, the timing-based combat is challenging but rewarding, and there are various ways to take on the game. Some of the most interesting moments in the game are entirely optional, and the order in which you tackle bosses and areas can affect the later parts of the game. The introduction of the ‘posture’ system to combat is also an excellent choice; fights are no longer entirely dependent on health, meaning even the hardest of bosses can be beaten swiftly if you apply pressure correctly. Sekiro is a game that focuses FromSoftware’s trademark difficulty into a stealth and sword-combat thriller, and it works wonderfully.

Now, this game deviates a bit from the typical type of game on this list. Rather than another action title or RPG adventure, Total War: Shogun 2 is the second of two samurai games in the strategy-focused Total War series. The game takes place in 16th century Japan and lets the player control one of the numerous warring clans of the time. Like other titles in the series, Shogun 2 features a mix between turn-based strategy and real-time decisions, as players control vast armies in turns, while at the same time managing real-time battles. The system works excellently, as the numerous unit types in Shogun 2, as well as the number of different clans, make it maybe the best of the Total War series. And, the visuals are brilliant, making it a joy to watch and participate in huge battles across the islands of Japan.

Although it’s just released, Ghost of Tsushima is already clearly one of the best the samurai genre has to offer. This open-world game is one of the finest experiences the PS4 generation has to offer, and it has a lot to offer to any player. While borrowing heavily from old samurai cinema, it blends stylish combat with stunning visuals and an elegant UI. Every battle can be approached in a different way; stealth becomes a more prominent option throughout the game, while an open fight allows the player to use different stances to tear through enemies. Or, you can challenge enemies to an elegant but deadly standoff. Move too early and you’ll be on the verge of death. But time your strike just right, and your opponent will have no chance. The world is a joy to explore, offering some of the best vistas gamers have ever seen. Its simply one of the best.