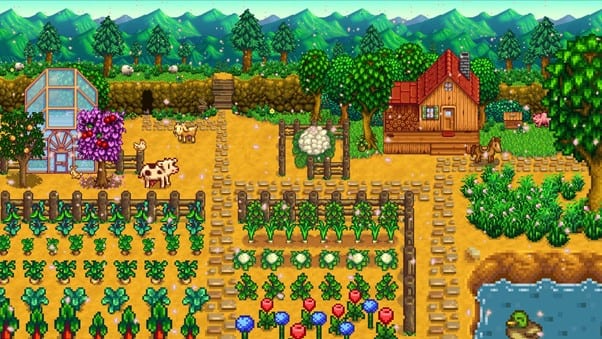 Stardew Valley is a phenomenal game about bringing their grandfather’s antique farm back to life. Combat is one of the talents you’ll need to learn as you proceed to build the grandfather’s farm. It is used to battle monsters in the Skull caverns mine. If you choose the wilderness farm as your beginning farm, killing creatures raises your combat level, and each level unlocks new recipes and abilities. When you achieve battle levels 5 and 10 in Stardew Valley, you will be presented with a few options. With all that on the plate, let us help you get accustomed to all the combat skills and fights you’ll encounter in the game so that you can play it with ease.

To begin, if you did not select the wilderness farm, fighting will be available after five days. After that time, Joja Corp will send you a letter stating that the debris obstructing the mine has been removed, and it is now open. When you enter the mine, Marlon will offer you the first weapon, a rusted sword. As you travel deeper into the mine, use the first blade to kill your first monsters. As you fight and kill creatures, your combat skill will improve and new crafting recipes will be available. And with each level, you will be given a reward.

At level 5, Stardew Valley players are given the option of becoming a warrior or a scout. If you choose Fighter, your attacks will cause 10% greater damage, and you will get +15HP. If you choose Scout, your critical strike chance increases by 50%, but you receive no bonus HP. It is critical to keep in mind that this 50% is exponential rather than addition. This implies that it will boost half of your basic critical chance (increase it by x1.5), instead of doubling it.

At level 10 battle, you can choose Brute instead of Fighter to enhance your damage by 15%! Take a scout if you want to be a crit machine! If you select scout at level 10, the doors to different skills are opened to you, some of those are:

When you get to the mine, you should have your first weapon and easily slaughter slimes and bats. Slimes are best defeated by pinning them against a wall, where they may be untangled and left. When that isn’t an option, simply slash, step, slash to stop them from using their special leap attack. Because many creatures are weak to your knockback, combat is straightforward and only serves as a minor impediment to finding ore in the mines. At each encounter, the combat needs to be leveled up, but it occurs by itself with each REP. Do not forget to bring in healing foods, to help you get back to life. Cauliflower, Strawberry, Kale, and other harvested goods are some examples.

You’ll be able to place additional stuff on your character as you unleash them and level up. Drag two rings and one pair of boots into the bottom slots at the left inventory screen to equip them on your character.

Rings have a range of benefits, but boots largely focus on increasing defense and Immunity, which can be found on various weapons. Defense reduces the amount of damage your character takes during combat. Immunity decreases the chances of your character being affected by negative status effects, such as the slimes’ slowing down your ability.

As you go into the mine, you will discover that the enemies are dropping weapons superior to yours. Pick them up! The Adventurer’s Guild, on the other hand, is likely to have better items. As you progress deeper into the mines, the number of weapons and goods you get will increase. The Silver Saber, Templar’s Blade, Steel Falchion, and Lava Katana are notable equipment.

The Best Weapon in Stardew Valley

The Galaxy Sword is the finest weapon in Stardew Valley as of the current version. This weapon can be obtained by locating a Prismatic Shard. These shards fall from Iridium rocks in the mines, and also the monsters you’ll fight. Once you’ve obtained the shard, place it in the center of three pillars in Calico Desert. There, you got yourself the Galaxy Weapon.

For fighting, you need to heal, and you need food for that. However, cooking can be a time-consuming task.  For healing, salads are the finest tavern item to buy. In terms of crop production, consuming many fruits with only 10 health benefits is pretty inconvenient. It is good for energy, but not so for the life meter. We searched each season’s fruits and vegetables to find those with the finest healing properties – Cauliflower, Kale, Strawberry, Flowers, Melon, Red Cabbage, Amaranth, Yam, Cranberries, Grape.

These are all the skills you need to get familiar with to win the game. Collect gifts, increase powers and execute your plans well. Hope this helps you get accustomed to one of the best co-op games. Now go back to bringing the antique farm back!

Picture used in the article: