My First Few Hours in ‘Ghost of Tsushima’ 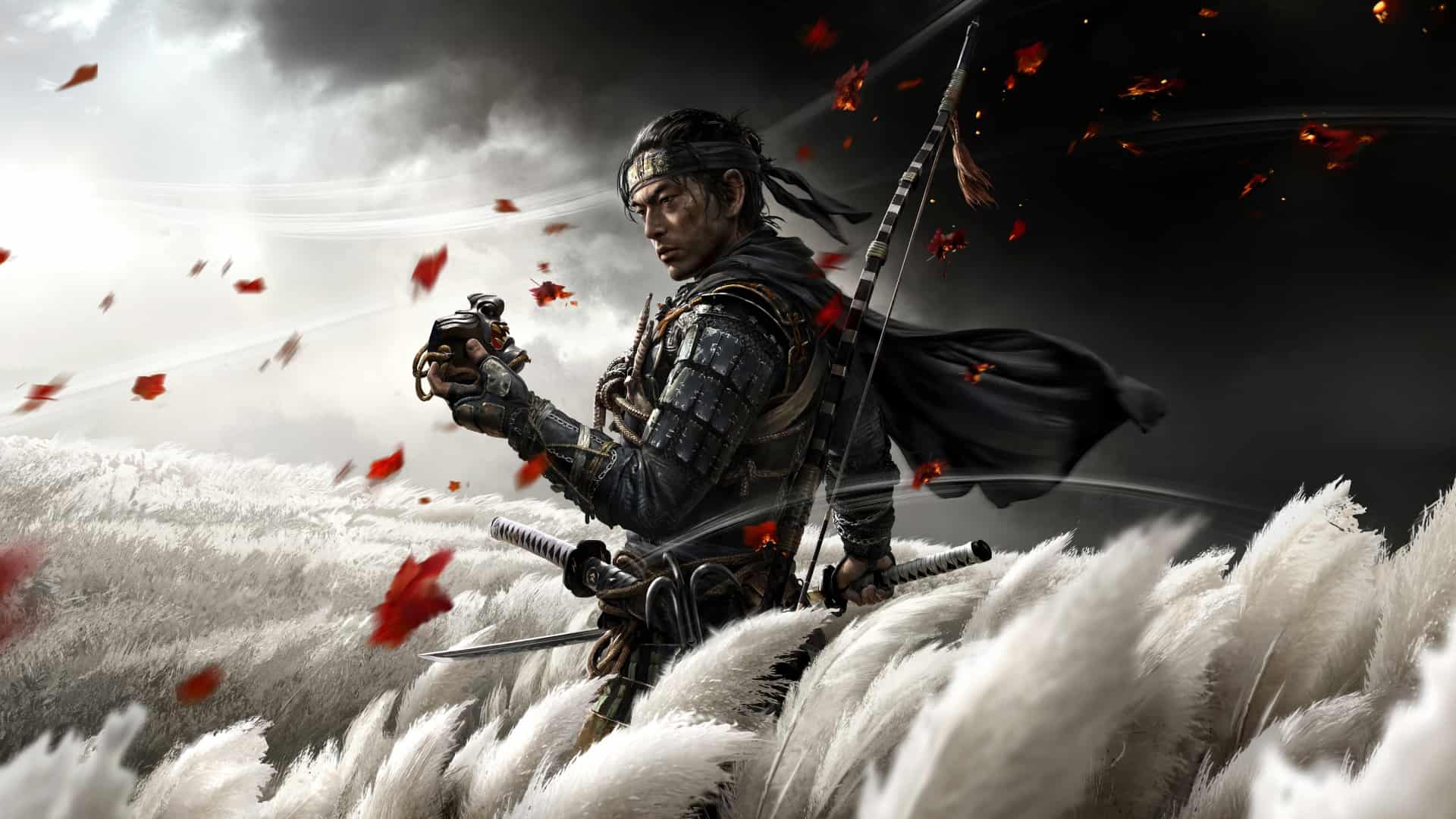 Ghost of Tsushima, Sucker Punch’s sprawling open-world Samurai game, has been the subject of much hype and excitement these last couple of months. While renowned journalists and the like were given early copies, the rest of the world had to sit (im)patiently and wait. However, the game finally went live to the whole world a few days ago, and since then, I have been able to spend a considerable amount of time playing. What follows is my experience, revealing as few story spoilers as possible, with the first few hours of the game. However, as it is with all reviews, spoilers of some kind are nearly inevitable, so if you wish to go into the game completely blind, you should click off of this page.

I opened the game and was greeted with a cinematic shot of a night sky, war banners bearing an unrecognized emblem fluttering about in the wind. I was immediately asked to choose if I wanted to play the game in Kurosawa mode, Sucker Punch’s filter that…is more than a filter, from what I’ve heard. Kurosawa mode is so in-depth that it not only changes the game to greyscale, but it also changes the game’s audio to more closely resemble a Kurosawa film. I chose the Samurai Cinema mode, which is in color but with Japanese voices and English subtitles. Next, I was asked which difficulty I wanted to play on. I chose Medium and continued. A few cutscenes played, giving me Jin’s story before I was thrust into play.

A village was burning, ransacked by Mongol invaders. Jin woke up and tasked me with finding his lost family sword, the Sakai Storm. When everything was said and done, Jin had his Katana back. Soon after this, I was forced to make a game-changing, possibly world-changing choice. “What horse do you want?” The game dangled this question in front of my face, taunting me. The game knew I would never be able to choose.

Five minutes passed. Ten minutes passed. I wandered idly around the stable, racking my brain, wondering what horse I wanted. “The white one…. the black one… or the dappled one..?” I was forced to ask myself. Finally, after what seemed like an eternity, I walked up to the black horse and selected it. The game immediately threw another question in my face. “What do you want to name it?” I was given three choices: Nobu (“trustworthy friend”), Kage (“risen from shadows”), and, finally, Sora (“bright as the sky”). I racked my brain some more and finally settled for Nobu. Jin mounted the horse, and a cutscene played, displaying a small version of what was seemingly the world’s map.

I found myself in front of a massive castle. “Kaneda Castle,” Jin remarked, the home of the game’s main antagonist, Khotun Khan. I brutally fought my way through the castle, tearing through ranks of nameless Mongol soldiers until I found myself at a bridge. “Khotun Khan!” Jin screamed. The gate at the end of the bridge slowly opened, and Khotun Khan walked out, smirking. A quick exchange was had before Jin’s uncle was dragged next to Khotun Khan. “This is your time, Lord Sakai,” Khotun Khan sarcastically remarked, slowly walking towards Jin. The camera panned out, displaying the bridge that held our hero and our antagonist. Khotun Khan quickly overwhelmed me with his sword, and yet another cutscene played. After Khotun Khan tried very nicely to persuade Jin to join the Mongol army and forsake his Bushido code, he threw Jin off of the bridge. A flashback to Jin’s childhood played out on screen, before cutting back to the present time. Luckily for Jin, he had washed up on a beach. A mystical wind swirled around Jin as if trying to point something out to him. Jin rose slowly to his feet. A new objective popped up on the screen, telling me to follow the wind.

Jin ran after the wind, and I came face to face with a familiar NPC, Yuna. Yuna was the same NPC I was with at Kaneda Castle! However, before she and Jin could share a proper reunion, a few Mongol riders (enemies on horses) appeared. Jin and Yuna quickly hid, and within seconds the Mongol riders had passed. However, there was one small problem. Jin and Yuna’s horses had disappeared! Jin whistled, and, much to Yuna’s surprise, the horses came running back. They mounted their horses, and the game officially took me out of the tutorial. Jin and Yuna rode through a forest, towards a beautiful white pampas flower field. Intense orchestral music played in the background, and the Ghost of Tsushima logo faded into the screen. The tutorial was finally over!

I slowly stopped my horse and examined the view, something I would end up doing a lot during my time with the game, which brings me to the first point in my review. The game is drop-dead gorgeous. It is one of the prettiest games I have ever played, and I would say it is almost certainly up there in terms of technical achievement with Rockstar’s Red Dead Redemption 2. Every single bit of the world in Ghost of Tsushima is jam-packed with scenic vistas, from cliffs overlooking the world to dangerous overhangs looming over forests.

There is so much to see and do in Ghost of Tsushima that it can feel a little overwhelming at times. I still have barely done any main story quests because I’m just so wrapped up in all the awesome side quests! Around any corner could be another scenic panorama waiting for you to stop and admire the view while playing the flute.

To my next point, the flute is a fun feature and has purposes beyond being a musical instrument. In Ghost of Tsushima, you can unlock flute songs by gathering singing crickets scattered around the world map. These songs allow you to do things like influence the weather, change the time of day, and so on. Bringing me to my next point. This game is a lot like 2017’s Breath of the Wild, in the sense that there is just so much to see and explore. You never feel bored exploring, and always find new or otherwise interesting things while you traverse the terrain. Even if you don’t discover anything of particularly great import, there is still a high likelihood that you can find some wonderful spot to stand and play the flute while you marvel at the game’s amazing graphics. The world feels alive.

The combat is brutally unforgiving at times: make a single mistake, and that’s all it takes for Jin to die. However, the game never felt unfair or unbalanced. All enemies, except the Brutes and armor-wearing foes, die in two or three sword strikes. However, this concept also applies to Jin. Jin will die if struck around three times, and when this happens, he will fall to the ground, allowing the enemy who struck you down to activate one of the many brutal execution moves. You can block attacks, but blocking attacks does not prevent enemies from hitting you in the back. You must always be sure to keep all enemies in front of you. An enemy that goes off-camera or who you no longer have a visual of can become a problem very quickly, especially if they are a spear user. The bow can feel inconsistent at times, dealing instant death should Jin strike a headshot, but often not killing a foe if hit in the chest. Thankfully, even the larger, stronger enemies are not immune to instant death via headshot. At the time of writing, I am still very early into the game and have not unlocked all of the weapons, so if this is just the first bow you get, then so be it. My other minor gripe with the archery is that the crosshair can make it hard to see what you are aiming at, and I would honestly prefer a zoomed-in version. One of the best things, combat-wise, about the game is the liberation missions. Across the world, much like other open-world games such as the Far Cry series, there are bases that you can liberate by killing all enemies occupying them. One of the most fun things about this, after dying many times, is figuring a way to dispatch as many enemies as possible without being caught in order to even the odds for Jin a little bit.

I found it funny that before the game was released, people were worried Jin would not be able to swim. This does not make sense, as thankfully, Jin can swim in the many bodies of water found around Tsushima island. However, his horse, annoyingly so, cannot. Swimming, of course, comes with its own useful mechanics. One such allows you to dive below the water to hide from enemies. However, Jin has a breath bar, and if it runs out, he will drown. So don’t stay underwater for too long!

Wrapping up the review, Ghost of Tsushima is truly an incredible game. The atmosphere is amazing. As you gallop around in a forest, you might hear the chirp of bugs and birds. You might hear the wind rustling or any other number of things that help to sell Ghost of Tsushima’s masterfully crafted world. While there are some very minor issues with Ghost of Tsushima, such as the bow play not feeling consistent at times, or enemies floating if they are killed on a non-flat surface, they are not game-breaking or game-ruining. Ghost of Tsushima, despite its few flaws, is very, very much worth your time. It is filled to the brim with awesome content to experience and things to see. It is home to one of the best combat systems in any video game I’ve ever played and is a game that is absolutely worth every bit of the time you put into playing it.

“Top Five Samurai Games of All Time”, Will Hitchcock

“Can Collectibles Ever Satisfy Everyone?”, J. Lennox