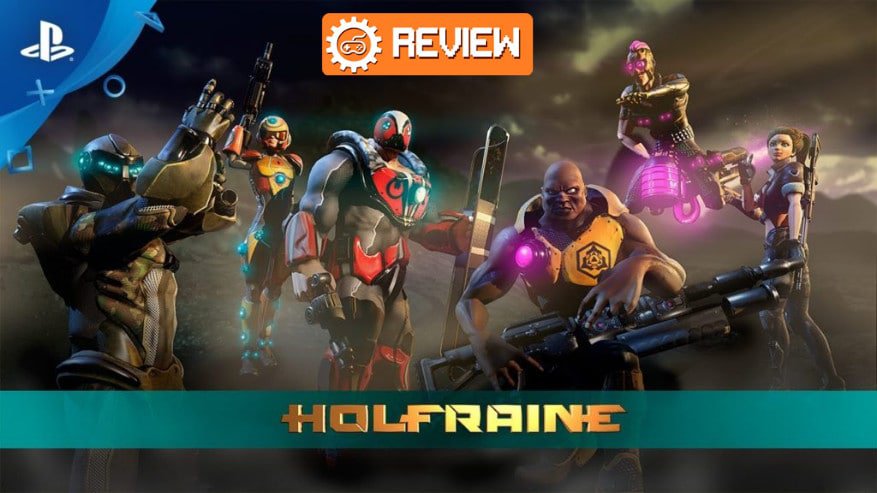 Just when you thought you’d seen all the attempts to cash in on Overwatch’s groundbreaking reinvention of the FPS genre. We have Holfraine. A game set in the third person that not so subtlety prides itself as a game heavily inspired by the Overwatch format.

Holfraine came to be through a successful kick-starter raising over $13,000 to fund this title. It centres around a group of heroes called the Black Eyes Troopers. Due to their home planet exhausting all their natural resources, these mercenaries are fighting for resources to keep their planet alive. A little to close to home?

Thrown In The Deep End

However, to find this narrative in game, you’ll have to dig deep to find anything that will satisfy your need for motivation to play this title. Upon loading up the title there is no tutorial, no opening cut scenes, not even any world building text. You get a main menu and are  then thrust into an online match without so much as a button layout to guide you.

Thankfully the controls are relatively easy to work out. Especially if you are familiar with the Overwatch format. You pick from six heroes and begin the game. This game is a mix of two familiar gaming modes. Capture the flag and domination. The player will be able to score points by killing opposition members, capturing focus points on the map and stealing spy drones from the enemies base and returning to your own base.

There are a series of airdrops that happen throughout the match that drop care packages and artillery. However it’s not particularity clear how to use these care packages. Plus the artillery is very telegraphed and easy to evade but it still adds a more dynamic aspect to the single map on offer. Although not the worst attempt at a fun game mode. It doesn’t do enough to stand out. So the fact that this is the one and only game mode on offer was a brave but Ill advised choice.

The heroes, although not groundbreaking in their delivery, offer a series of varied tactical approaches such as Roadblock that offers a defensive asset through his shield. He’s Reinhardt in all but name. Then there is a quick pistol shooter akin to Tracer, a revolver user akin to McCree, a sniper akin to Widowmaker and so on. In short, the heroes at a base level serve their purpose but over no unique qualities to this game.

Then as you get into the combat. The cracks really start to show. Gun play is clunky and in some cases frustrating to the point of quitting all together. The best example being the sniper character. If aiming down the sight the sensitivity is heightened to a ridiculous degree. So much so that I found myself aiming from the hip from across the map with a better success rate.

More generally though, to hit an enemy, you need to be incredibly accurate. This is fine for characters that have pistols. However when playing with characters with big spread weapons this still continues. Making no sense at all and inciting rage when circling your foes, frantically shooting the ground around them.

Controls That Offer No Control

These control flaws also show themselves in the movement. Sprinting requires holding the right trigger button rather than one click for a short burst which makes seamless run and gunning harder to perform. Plus jumping onto ledges often leads to the player getting stuck and offering an easy target to opponents.

Aesthetically, Holfraine does offer a series of decent textures and skins for the characters. Plus taking into account the bargain price of the title at launch, it would be asking a lot for a great deal more polish. However it’s the lack of flair or art direction that the game adopts that is the issue. It simply feels like a generic budget title to cash in on Overwatch and its success.

Competent Presentation With No Direction

Holfraine also feels lazy in other areas of its presentation. Taking the sound quality for example. The sound effects are uninspired. The grunts characters are obnoxious and the only dialogue you’ll get out of them. Not to mention that the menu theme is recycled and used as the soundtrack for the whole title played on a loop.

What Holfraine seems to forget is that Paladins. A game that is free to play. Is a much more cohesive and mechanically sound representation of Overwatch. So it seems like Ill judgement for the developers to offer no unique aspect to their game at all and expect the gaming populous to spend money on this title when there is a better free alternative.

On the plus side. The game is constantly offering you generous rewards to spend on character EXP boosters and unique skins. However, the novelty of this only lasts so long and players are soon reminded that they are playing a game that feels like a glorified mobile game port.

Overall Holfraine has very little going for it other than a decent graphical presentation. Though much like the rest of the game. It lacks any form of personality or charm that it can call its own. The controls are lazy, the soundtrack is non existent and the heroes are passable at best.

Ultimately, if you’re looking for a game like this. I would categorically not recommend this game. It’s not worth your time and effort. You’ll spend the fifteen minutes that it takes to see all the game has to offer in a state of disappointment. Just save your money and boot up Paladins free of charge. Or just wait for Valorant. This one is a bargain title but if you find it in the bargain bin. Just let it stay where it belongs.

Holfraine released on the third of March 2020 and is available on the PS store for a low price of £3.99. Thank you to Fluxart Studios for the review code for this title and the opportunity to cover the game.

Also,we are on Opencritic.com so if you want more reviews, head over there.

Thanks for checking out our review. If you liked it then why not check out our other recent reviews of Spartan Fist or the Mega Man Zero/ZX Legacy Collection. Thanks for reading COG!

This game tries desperately to be everything overwatch was in one neat package. However it fails to deliver anything close to it’s inspiration. Do yourself a favor and give this one a miss.