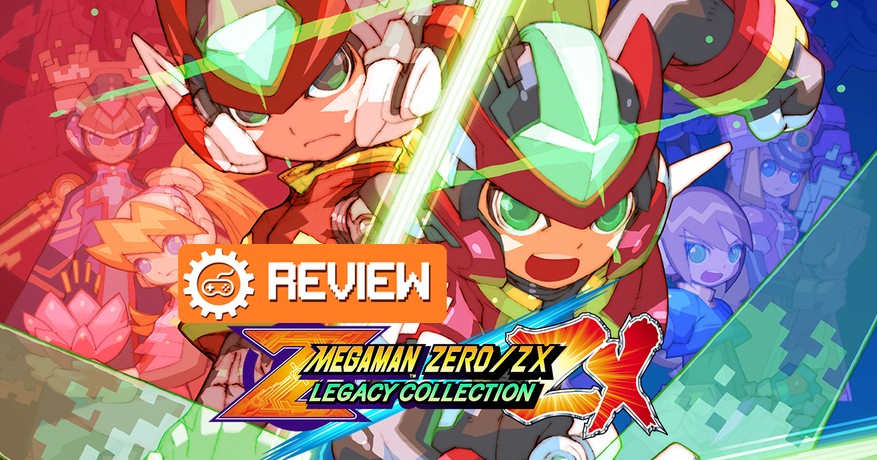 Ah, the Mega Man Zero games, it only felt like it was yesterday since I’ve played these games and now they’re available on multiple consoles within this neat collection. In case you are new to the series, Mega Man Zero takes place several years after the Mega Man X series in its own dystopian future. Robots, known as Reploids, are trying to figure out a way to protect their human counterparts by eliminating and “retiring” other Reploids. There simply isn’t sufficient energy to support a human/reploid society. Ciel is a reploid scientist who is trying to figure out a way to create new sustainable energy and needs the legendary Zero to stave off the reploids of Neo Arcadia who want to wipe them out.

This game series took a lot of creative chances on the story that wasn’t prevalent in Mega Man X. X was mostly about Sigma trying to figure a way to destroy all humankind and let Maverick robots rule through power. X’s story is a repetitive affair in almost every game, beat enemies one through eight and defeat the big bad. Only to find out big bad didn’t really die and hence you repeat it for the next game. However, the introduction of Zero in Mega Man X4 changed the overall narrative.

Zero’s tales have always been one of the inner conflicts between characters and what they present to the bigger story. Has this been represented well in the X series? No, but that’s where Mega Man Zero comes into play.

Mega Man Zero started its journey on GameBoy Advance and later Mega Man ZX would debut on Nintendo DS. Created in collaboration with Inti Creates, the Zero series sets itself apart from Mega Man X in several key ways. Mega Man Zero instead borrows elements from Metroidvania games such as large maps to explore, weapons to level up and acquire, and a story driving the gameplay forward. This collection contains a total of 6 games which range from Mega Man Zero 1-4, Mega Man ZX and Mega Man ZX: Advent. Do these games hold up in for newcomers to the series or veteran players seeking a bit of nostalgic fun?

Yes and no. Each one of these games is fun in their own rights and I think the main driving force to playing these games is both the overarching narrative and boss battles. This collection understands that these were difficult games at the time in order to extend playtime. With new features added, you can toggle options to make the gameplay more generous with health and damage or get brand new save points. The savepoint option is far more generous and spreads them out all over the games. Mega Man Zero/ZX borrow elements from Metroidvania games but they don’t always work well enough with each other, it does improve over time but the main gameplay cycle relies on linear paths and a boss fights.

Mega Man Zero/ZX still maintains its fast melee action with several additions of melee weapons as the series evolves and grows with each iteration. However, playing each iteration shows how much-recycled content there is when it comes to character work, locations, and certain weapons. Which makes sense, at the time these games came out on a smaller screen and most likely had a smaller budget than its console counterparts. However, that limitation also allowed the developers to create a bigger narrative with pre-existing character models and bosses. Most bosses in Mega Man X were one and done affairs, you would never see them again once they were destroyed.

Mega Man Zero reuses assets in a smart way by giving boss characters bigger roles and becoming arch-rivals. Mega Man Zero/ZX Legacy Collection is still a good collection of great games that are fun unlike Mega Man X Legacy 2. I would say certain elements of these games don’t hold up as well in 2020 but still offer a solid collection of exciting boss battles, a story of sustainable energy, and elevating Zero’s character to the same level as X.

This collection like the Mega Man X series before it includes its own boss rush mode, screen resizing, and filters that can be applied plus a ton of artwork to choose from. Now here’s my only gripe about the screen filters. The screen filters allow you to play the game with its “smooth” mode that softens the edges, pixel perfect or CRT mode. The smooth and pixel perfect mode are standard filters for these types of games. The smooth filter, in particular, helps to soften those edges when playing on bigger screens. However, CRT mode seems like an odd inclusion when we consider that these games were never playable on tv unless you had the old GBA to TV adapter that connected with the Gamecube.

The art! The artwork included in this collection alone would be worth at least $100 if you wanted to buy the artbooks separately. The artists at Inti Creates have this style that matches well with the story that Mega Man Zero portrays and helps create a unique visual style that stood out against Mega Man X games. Inti Creates still employs this style with their latest games like Azure Striker Gunvolt and Dragon Marked For Death. Mega Man X’s visual style was grounded in mechanical and steel depictions of environments and had a bulkier look. Mega Man Zero style was sleeker and minimalist which helped sell the idea that this was a time jump since the last time we saw Zero and X after Mega Man x8.

Mega Man Zero/ZX Legacy Collection includes a boss rush style game mode. Z-Chaser is a timelimit mode in which you have to fight against the clock to defeat a stage and boss with the fastest time. Mega Man X Legacy 1 and 2 had X-Challenge which pits you against two maverick bosses and mark your progress on its online leaderboards. Z-Chaser does not have a simultaneous boss fights but instead ops out for the competition in time and includes ghost players to compete against.

One thing that I love about Z-Chaser that sets itself apart from X Challenge is the fact that there is a two-player mode, you and a friend can compete with each other on the same screen. Which is reminiscent of the format Speedrunners use at events like Games Done Quick that raise money for charity. Z-Chaser may not have that same flair of fighting two bosses at once but I’ve always preferred time attack challenges and the addition for a competitive co-op is a welcome change.

Yes, I don’t think anyone would regret buying this collection of games. The game includes an array of amazing artwork, filters, and the Z-Chaser game mode. Mega Man Zero includes a better story than its predecessor, is it a cohesive story? Not all the time but it’s a far more enjoyable take when you consider that Zero is not only fighting against his own kind but solving a mystery on what happened the world and X.

Thanks for reading! Don’t forget to check out some of my other reviews like They Are Billions and LEGO Jurrasic World. For more great interviews, reviews, editorials, and news stay tuned to CultureOfGaming.com or check us out on OpenCritic.com.

Yes, I don’t think anyone would regret buying this collection of games. The game includes an array of amazing artwork, filters, and the Z-Chaser game mode. Mega Man Zero includes a better story than its predecessor, is it a cohesive story? Not all the time but it’s a far more enjoyable take when you consider that Zero is not only fighting against his own kind but solving a mystery on what happened the world and X.