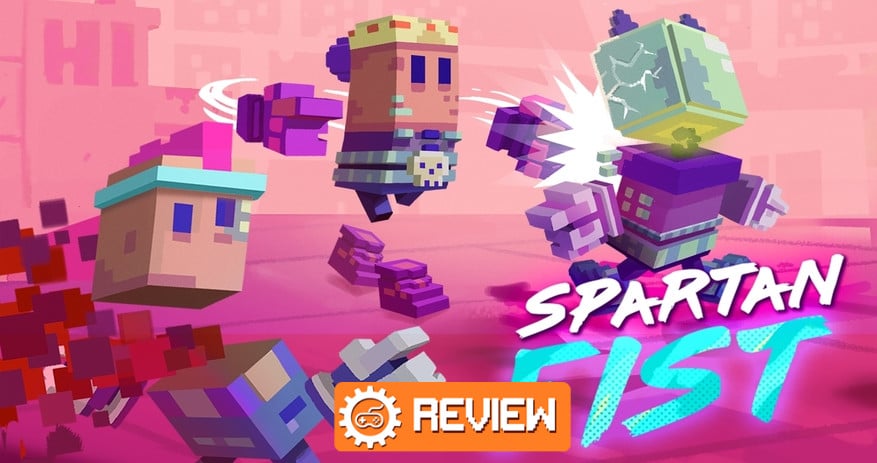 On the 28th of February 2020, developer Glass Door Games and publisher Jandusoft released procedurally generated gladiator beat-em up, Spartan Fist for the PS4. Spartan Fist is a game that sings from the same hymn sheet as games like The Binding of Issac or Rogue Legacy. Players will traverse through a number of procedurally generated rooms, battling varying enemies and bosses in search of the overall goal of collecting all the various power fists and clearing the areas.

Get Your Gloves On

As you would expect from first impressions as you progress through the tutorial. The narrative is flimsy at best with little in terms of plot to motivate the player to continue. You are introduced to your cat companion Frankie that sits upon your shoulder and will guide you throughout. This is given no context as to your relationship or why they are helping you. All you know is you’re in a a large Colosseum like area. Tasked with acquiring power fists and punching everyone in sight.

There is a genuine plot even though that may not be too obvious. The plot synopsis is that Emma Jones, former detective. Has been kidnapped by cat overlords and has to use her boxing skills to escape from this gladiator arena. Now, maybe i’m a cynical and grumpy old man lacking in whimsy, but that plot seems immature to the point of excess. With little context provided to even tie the estranged plot points together.

Give ‘Em The Old One Two

Thankfully, the motivation to proceed that the narrative fails to deliver on, is picked up by the gameplay. The mechanics to move, punch your way through obstacles and beat up your foes are, at a base level, novel and fun. There’s something inherently satisfying about flailing your newly acquired fists at enemies. Whilst little blocky blood fragments pour from their faces. Although, it was a nice consideration to offer the player rainbows in place of gore. My choice was obviously gore but I appreciated the offer.

The game aims to keep the simplistic and mindless pugilist action going through a bunch of varying enemy types with different attack patterns. Plus offering lumbering bosses to battle throughout as well. However, as the difficulty begins to test the player ever slightly. This is where the cracks begin to show.

The lock on system that is pretty much essential as the game offers more competent enemies, is poorly implemented and clunky. It will often unlock from opponents, forcing players to freestyle. This would be fine if the general fighting was competently handled but sadly this falls flat as well. When the game mechanics are working in the players favor it’s reasonably enjoyable. Unfortunately though, the ratio that it’s successful compared to when it’s not is simply not good enough. The full run time for the game doesn’t exceed two hours at most. Yet you’ll still find the time to get frustrated more times than enough.

Mix It Up With Power-Ups

Spartan Fist isn’t without good ideas though. It offers ways to enhance your fighter through enhancing HP, stamina and strengthening your potential fist pickups. However the power ups offer very minor changes to gameplay. When compared to the likes of Rogue Legacy for example, that has a whole tree of upgrades with much more variety. Sadly Spartan Fist’s upgrades fall exceptionally short in comparison.

The game also offers a set of interactive environmental designs to add extra challenge to certain areas. Why they fall short is because enemies move rather sluggishly. The player never feels rushed or in danger of making a mistake of falling into flame traps or oncoming trains. However, the way players can use these same environmental factors to hurt and kill enemies is commendable. As is the variety of different traps and environmental factors on offer.

A Variety Of Fists

The abilities through the new fists offer something new in attacking styles such as aerial attacks or faster movement to get around the back of opponents. They are a real highlight of the gameplay, offering unique ways to put together combos, offering varied play styles and even offering easier platforming and traversal to enemies on high ledges.

Though instead of being scaled with the enemies, the upgrades only offer overpowered ways to exploit the game. Fists like the rat fist, rocket fist and feather fist all offer these exploits. The rat fist having an exceptionally powerful drill power attack, the feather fist offering airborne attacks that most of the AI can’t replicate or defend against. Plus the rocket fist offers super fast movement that allows you to zoom in and out of combat without getting hit. In short, gameplay in the first five minutes is where it peaks.

In terms of the aesthetic of this title, it has to be said. I really have a soft spot for it’s Roblox-esque look. Has the whole blocky art style been done before? Yes. Though it’s handled well, offers a vibrant mesh of colors and areas to fight thorough and little details like the aforementioned gore option is a novel inclusion that adds charm to the game. It takes a color palette similar to that of Neon heavy, Miami vice, eighties aesthetics. Then combines it with a Xeno-punk vibe to give a unique twist to the blocky Minecraft inspired design with an eighties aerobic workout video.

In terms of the Spartan Fist soundtrack, it follows a growing trend of indie games that have opted for a synth heavy style. The music is generally upbeat and tonally suits the high energy fist swinging that the player is doing. It doesn’t do anything that recent synth tracks from indie titles have done. However, what they have in place is made competently and serves as appropriate background music when dealing out knuckle sandwiches. Provided that the blocky character models have knuckles that is. It does get a little obnoxious as it’s one repetitive tune on a loop but thanks to the short run time, most players wont notice.

Also, speaking of the short run time. An adept player is able to play through the game in about an hour. So the game makes a good case for itself in terms of replay-ability. If you enjoy the gameplay, like making your character stronger and enjoy the variety that the procedurally generated rooms offer. Then it is probably worth jumping back in. Though if your in the camp with players who find the controls broken and obnoxious, the upgrades mostly arbitrary and the procedural generation lacking in ideas and new content after only an hour. Which if i’m honest, is a tonne more likely, there’s very little reason to subject yourself to this title again.

Overall, Spartan Fist has some fantastic ideas that weren’t carried out as effectively as they could have been. The initial joy of wildly swinging your fists is subdued by the clunky controls. The upgrades offer respite from this frustration and monotony but only due to their semi game breaking qualities. The upgrading of your characters stats only serve as arbitrary buffs to aid progression with little joy to be garnered from them.

The art style and soundtrack on show will do a lot to draw players in as it is the games standout achievement. However, with feelings of frustration and boredom being so common in a one hour play through. I would be lying if i recommended this one, even at it’s relatively low price point. My recommendation is find a way to play five minutes of this game, perhaps through someone that paid the full retail price. That way you’ll get the optimum experience from this title.

Spartan Fist is available on PS4, Xbox One, Nintendo switch and PC. This review was based on the version available on the PS4 platform. The game is currently priced at £11.99 on the PS store with a 15% discount on PS plus if you act fast.

We are also on Opencritic.com . So make sure to us check out there too!

Plus, if you liked this review why not check out our review of DREAMO or or Corruption 2029. Thank you for reading COG

A mindless first person beat-em up that offers a lot of interesting ideas. Though sadly delivers very few of them competently. The art style and varied fist combos offer some intrigue. However, the mindlessness of the gameplay will soon see you calling it quits early on an already very short game.