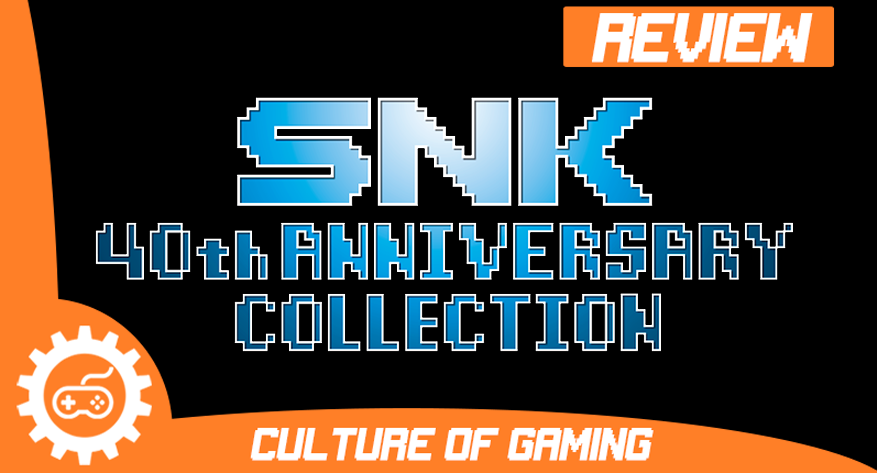 Since you’re reading this review, you’re probably either a huge SNK fan or at least curious about the game developers. I have some bad news for you: Up until this review I had never played a single SNK game. No Metal Slug, no King of Fighters, and no Fatal Fury. They were never a part of my childhood, but I was excited to try this bundle of games. I can happily say that the SNK 40th Anniversary Collection didn’t disappoint.

A Love Letter to SNK Fans

Before even getting into the games I need to talk about how well the SNK Anniversary Collection is curated. It’s like a virtual museum of everything SNK. From images of original arcade cabinets and instructional booklets to the classic art, this collection has everything a fan of the storied developer could ever want. These high-resolution images are the next best thing to getting hands-on with the physical forms. Despite my lack of SNK knowledge, I love learning about video game history. This is a simple yet effective way to preserve gaming history for fans and neophytes (me) alike.

Although the PS4 Pro I used to play this game is certainly powerful enough to run all these titles, emulation is a tricky art. That much was clearly seen in the PlayStation Classic. Poorly written software can spoil your enjoyment even if you have plenty capable hardware. Saying this emulation is better than that of the ill-fated PS Classic isn’t much of an endorsement. The truth is quite the contrary. The ability of the SNK Anniversary Collection to replicate the look of these beloved games is uncanny. I feel confident in saying that this is the next best thing to having the original hardware in your home.

My only gripe is the ever-changing controls. Some shooters use a shoulder button to fire, some use square, and others even use X. There’s a button layout available in the pause menu of each game. However, none of these games have button layouts complex enough to warrant changing them from one game to the next. Luckily, the lack of complex controls makes it easy to switch between titles with minimal confusion.

The biggest advantage of emulation is the ability to save the game at any point. I wish I could have more than one save state per game, but having them at all is greatly appreciated. What I found even more useful was the ability to rewind the game at any time. You can go back to the point right before you died and adjust your movements to survive the deadly onslaught.

The Freedom of Choice

I had never heard of a single title in the SNK Anniversary Collection prior to playing them. One of our community managers, John Powell, mentioned Ikari Warriors which didn’t mean much to me, but I was intrigued. It wasn’t my favorite game on the list, but it was decent. Psycho Soldier was by far my favorite in this collection. The giant fire-breathing bird transformation is now one of my favorite power-ups in retro gaming. Psycho Soldier offers the challenge I expect from classic games combined with the ability to feel ridiculously powerful. SAR: Search and Rescue resonated with my gaming tastes as well. Just like Psycho Soldier this game is plenty challenging, but also makes you insanely strong with the ability to fire homing rockets and screen-clearing black holes.

Both of those games have the same aspects that I love in games, but they play completely differently. One is a top-down run and gun and the other is a side-scrolling action platformer. With 24 different games there’s sure to be something for everyone. But to be fair, the quality disparity between some titles in this collection is quite large. The list of games is also questionable. The three SNK games I mentioned earlier — arguably the most popular SNK titles — are nowhere to be found. It would be like making a classic Nintendo collection without Mario, Zelda, or Kirby. There are still plenty of high-quality titles to choose from, but the big ones are oddly missing.

I wasn’t around during the heyday of SNK, but it seems like top-down shooters were the battle royale of the time. There’s a plentiful list of games, but so many of the titles feel like copies of one another. It’s undoubtedly a look into the limitations of 2D game development in that era. The inclusion of any King of Fighters or Fatal Fury title would be a welcome addition. Either would bring in a well-known franchise that is inexplicably missing from this collection.

When I said there are 24 games in this collection that was a bit of a lie. Eight of the titles have the console and arcade versions available for a grand total of 32 games. The difference between the arcade and console versions is big enough that I would consider each their own game. The arcade versions are almost always the better games though, but the inclusion of both is an uncommon and welcome practice. These retro collections typically only include the console versions. The amount of love and care SNK put into this title is remarkable.

Despite the quality of games going up and down, most of them have aged surprisingly well. I could see an indie developer releasing a title like Psycho Soldier in 2019. The controls feel good and the art is timeless. The simplicity of the controls in these games translates well through the ages. There’s not much to mess up since NES controllers and the original cabinets had few buttons. But that’s a nice unintended convenience of an era gone by.

I didn’t go into this game thinking I would find any games that I would become a big fan of. Two out of 24 is not so bad though. Most of the games in the SNK Anniversary Collection range from good to I would rather not play them ever again. In the end, most of the titles are worth playing all the way through. It’s easy to beat a couple a week since most of these games can be completed in a couple hours. SNK isn’t the big player in game development they used to be, but this collection is a wonderful labor of love for fans of these titles. Despite the odd exclusion of some of their most popular games, the SNK Anniversary Collection is a worth-while example of what classic collections can and should be.

The SNK 40th Anniversary Collection comes to PS4 in retail stores and digitally on the PlayStation Store on Mar 19, 2019 at a price of $39.99 in North America. It also releases in Europe on Mar 22, 2019 and Australia/New Zealand Mar 29, 2019. The Nintendo Switch version is available now in all regions.

If you liked this review check out more of our reviews on opencritic.com. A code for the PS4 version of this game was provided for the reviewer.

The SNK 40th Anniversary Collection is one of the best classic collections I’ve ever played.