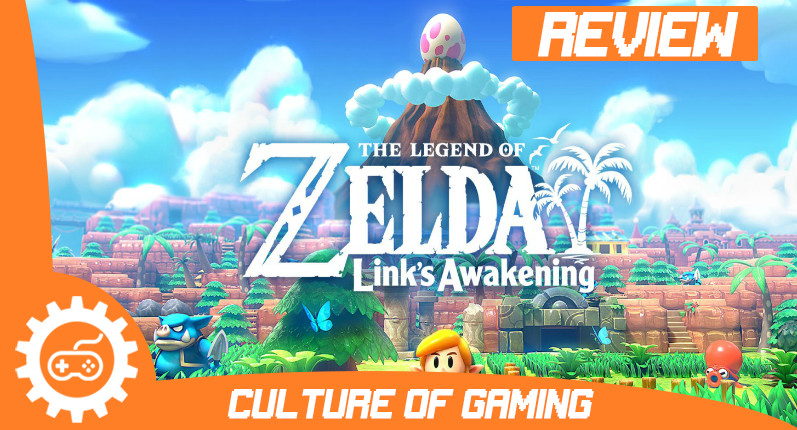 What makes for a good remake of a classic game? I pondered this question throughout my time with The Legend of Zelda: Link’s Awakening (2019) constantly. What did I want to see Nintendo do with a game so cemented in time as Link’s Awakening, a strange Gameboy game from 1993 with a cult following of fans that love its oddities? As I pushed further and further through the remake, I realized what I wanted was what I was playing — a classic video game with gameplay just as polished and tight as I remember it always being. Links Awakening is rebuilt from the ground up in a beautiful art style reminiscent of a diorama — filled with toys that breathes new life into the original game, without altering much else. The Legend of Zelda: Link’s Awakening (2019) looks like a brand new game from Nintendo, but make no mistake; in every way, this is still Link’s Awakening. The puzzles, boss encounters, and combat systems are all exactly how you remember.

Stranded on an Island

The game begins with our hero Link on a small boat caught in a vicious storm. The sea churns and spits, threatening to swallow the dinghy before a flash of lightning strikes the ship, and Link is thrown into the ocean. Eventually, we wash up on the shore of an unfamiliar island, and the story begins. We learn that the island is called Koholint and are (unsurprisingly) tasked with saving the land by waking a celestial being called the Wind Fish that sits atop a great mountain.

To do this, we must first collect eight instruments hidden in dungeons around the island, guarded by monsters, and play them for the fish. Our song is said to wake the Wind Fish from its eternal slumber and cleanse the island of its growing infection of darkness and monsters. The Legend of Zelda isn’t known for having especially engaging stories, but I have always found Link’s Awakening to have a surprising nuance to its narrative. The implications of what will happens if the Wind Fish is awakened leads one to question the morality of their actions, though the player ultimately has no say in what they do — the Wind Fish must be awoken.

The world Koholint is deceptively simple. From the outset, the map will be mostly empty, but as you progress, more and more will be available to see and explore. Before entering the first dungeon, you realize you can’t get anywhere due to various roadblocks barring you. Holes you can’t jump over, water you can’t swim through, and rocks you can’t move all act as limitations to ensure a linear game. Despite technically having an open world, the game only allows you to complete dungeons in a specific order due to the necessity of new items to progress.

I love this classic Zelda formula. The RPG progression in this revolves almost exclusively around acquiring new items and seeing where they will let you get next. I find it to be an addictively satisfying loop. After every new dungeon I cleared, I then scoured the world to see what new secrets I could uncover what new paths I could now traverse.

And secrets there are! Link’s Awakening is bubbling with cracked walls to bomb, bushes to slash hiding staircases to deep caves, and underwater tunnels — all of which usually lead to a new treasure. This treasure may be heart pieces to gain more health, secret seashells, or upgrades to carry more of an item. It may even lead to new characters or mini-games. There is also a long, multi-step trading side quest that threads between tons of different areas, eventually concluding with a rare and powerful item.

Exploring is always rewarding and is much improved upon over the original Link’s Awakening (1993). In Link’s Awakening (2019) from the map screen, players can access a variety of icons to place as reminders if you can’t yet reach something. I can’t tell you how many times I set a heart icon down to remind myself of a heart piece I couldn’t acquire yet. This system is invaluable if you want to collect everything in the game.

When not wandering around Koholint, Link will be crawling through the various dungeons scattered around the map. The dungeons are all very well designed, becoming increasingly more demanding as the game progresses. Link’s Awakening does an incredible job of introducing the player to a simple concept early in the game, only to push their understanding of that concept later on. This element makes you feel like you’re learning the game’s mechanics and becoming better for it. Each dungeon holds an item that to add to Link’s arsenal, often to defeat the boss of the dungeon and then access new areas around Koholint. From the combat to the puzzles, the game isn’t too demanding — unless you choose for it to be.

Before creating a save file, you may start a normal new game or one under the Hero Mode ruleset. Hero Mode doubles the damage done by enemies and removes the ability for Link to find hearts throughout the game. This means Link can only heal by finding a fairy fountain, buying medicine from a shopkeeper, or using fairies caught in bottles. This significantly increases the difficulty of the early game as Link can only take a few hits before dying. As a result, I died a total of 54 times in my first playthrough. Almost all of these deaths happened in the first half of the game. By the second half, better resources made surviving much easier. I enjoyed the increased challenge, but some may find it frustrating. Speaking of which, this game, excellent as it is, isn’t perfect.

Performance hitches truly sully the experience. The frame rate is continuously dropping when exploring the overworld. It seems as though it gets worse when you’re moving between different screens with large amounts of enemies. I also experienced the frame rate drop while I was in dungeons when there were no monsters at all. I tested the game on my Switch both in handheld and docked, and the problem occurred regardless. Never did it drop enough that I missed a jump or sword swing, but it was always noticeable.

Then there is the new dungeon maker mode, which is the most significant piece of wholly new content this remake has. To say this thing is a disappointment would be an understatement. In a world where Mario Maker exists and is so incredibly feature-rich, this mode feels like an afterthought. Like something tacked on to feign increased replayability or value.

To briefly summarize, in this mode, you use tiles you accrue by beating dungeons. You then create “new” dungeons to play through. The problem is they’re not new, at all — you’re playing through dungeons you’ve already beaten. These tiles are pulled directly from previous dungeons, and you cannot customize them at all. Sure, you can arrange them in unique ways, but that’s not enough. You’ll still be fighting the same bosses and completing the same puzzles. Add to the fact that it has forced amiibo support, and it’s hard to find anything positive to say. Fortunately, it is entirely optional, so you can ignore this part of the game (as you well should). Instead, we can hold out hopes for a Nintendo to release true Zelda Maker one day.

Circling back around, I ask again, what makes for a good remake of a classic game? Honestly, I don’t think there is a single correct response. But what I do believe is The Legend of Zelda: Link’s Awakening (2019) serves as a prime example of one way to do it: treat the source material as irreverent as possible and stick to a script that worked before. While the game doesn’t necessarily do anything especially risky in this remake, I don’t think it needs to because it excels by sticking to the formula that made it work so well on the Gameboy. Link’s Awakening is a bizarre game with some incredible ideas and an unexpectedly emotional plot. It was well deserving of a remake, and I’m very excited that a new generation can experience this gem in the Zelda series. Even though the experience as a whole is marred by some truly unfortunate performance issues and an extra dungeon creator, I can say without a doubt this is the definitive way to play The Legend of Zelda: Link’s Awakening in 2019.

I’m a fitness enthusiast and a Pokémon diehard. The earliest memories I have are of playing Super Mario Bros. 2 in a cramped room on a dimly lit television, so it only makes sense that 24 years later I’m writing about video games. If I’m not in the gym or out with my running club,  I’m playing singles in Smash Bros. or diving deep in the lore of the latest From Software RPG.