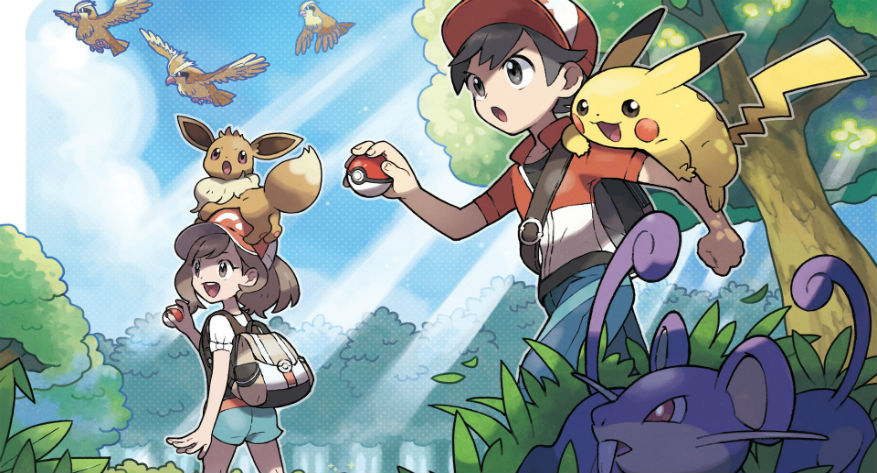 After the reveal of Pokémon Sword and Pokémon Shield, many fans didn’t know what to think of the new games. On one hand, the visuals and animations looked strikingly beautiful and and the new region seemed to have a more open-world style. On the other hand, some of the features within the games have apparently returned for better or worse. Two of these features in particular include random encounters and the lack of Pokémon following you in the overworld. Now, if you haven’t played any Pokémon recently, you may think nothing of this. However, if you’ve played the recent Pokémon Let’s Go! games, you know that the few innovative mechanics implemented in these games are nowhere to be found in Sword and Shield.

To many, the Let’s Go! games simplified the Pokémon formula to the extent of being painfully easy. Regardless, there’s no denying that these titles brought some long-awaited features that the majority of the community enjoyed. As we moved on to Generation Eight, players expected these shake-ups to migrate to the newest mainline instalments. Sadly, from what we can see, this doesn’t seem to be the case. We can’t say for sure that these mechanics are completely gone until we see more, but the evidence currently leans to no signs of Let’s Go! features. Is that really a bad thing though? Does the return of Pokémon to its roots spell chaos for the series? Lets discuss this further, shall we?

Let’s face it, the Pokémon Let’s Go! games were not unanimously loved. In fact, a good portion of fans feared that these games would signify the direction Game Freak would take the series. While the games did perform well enough to justify a continuation of this style, it doesn’t seem like the intention was to ever replace the core games with this. On the contrary, Game Freak likely took the opportunity to test the waters with these titles. It makes sense when you think about it. Best case scenario: you strike gold with new gameplay that can carry over to other games. Worst case scenario: you experiment with a one-off title that you easily swipe under the rug if it tanks. With this lack of fear, some major strides were made.

We received some great quality-of-life improvements such as a portable PC and more variety to ride Pokémon. We also got massive spins on traditional mechanics. First, we could finally see Pokémon in the overworld. Not only did this give more immersion to the world, but it streamlined searching for specific Pokémon species and shiny hunting. Second, we had the ability to have all of the original 151 Pokémon follow us during our adventures, which truly won over every fan. It may seem minor, but this mechanic added a sense of bonding between players and their Pokémon that drove them to these games.

Not everything was a winner with Let’s Go! Obviously, the catching mechanic and the lack of wild battles took away some of the excitement that fans loved from the main series.  This new gameplay essentially just had us throwing Pokéballs until one stuck. Seems a little mundane to those who find fun in dwindling a wild Pokémon’s health and hoping it was enough to capture it. Also, the removal of Pokémon abilities and held items made the actual battling that remained seem overly basic. Those who found fun in the strategy of planning which abilities and items to use had none of that in these titles. Regardless, Let’s Go! ultimately succeeded in it’s mission: give a platform for the developers to test some features that may win over some newcomers to the franchise.

Sword and Shield: If It Ain’t Broke…

Pokémon Sword and Pokémon Shield sets out to give fans what they adore from the franchise, and with that, means some sacrifices. Some of the mechanics from Let’s Go! clearly won’t return, but that’s not to say these games will suffer from it. There’s a reason why Pokémon still exists to this day: the formula works. People love the ability to earn their Pokémon through wild battles. Fans enjoy the excitement of not knowing what Pokémon they’ll run into next. Besides, would you really want Let’s Go!’s catching mechanic in your main Pokémon game? I didn’t think so. Ultimately, the traditional method that Game Freak uses in their games still brings in players, so why change it? Now, that’s not to say that there should be no innovation at all. Pokémon games always introduce new ideas and features, while still keeping true to what makes them Pokémon games.

While Let’s Go! brought some great gameplay to the table, it’s drastic shift from the main Pokémon equation  likely lead to the absence of said gameplay from the newest Pokémon titles. Will Sword and Shield suffer from this? Probably not. The traditional gameplay still wins gamers over, therefore returning to it won’t cause any damage… for now. At some point, Game Freak will have to commit to something new, otherwise fans will begin to turn away from Pokémon, but that likely won’t happen for some time. So is departing from Let’s Go!‘s gameplay a bad thin for the Pokémon franchise. Currently, no; Pokémon has too large of a fan base that love the traditional mechanics for any real repercussions to occur. Only time will tell how long this will remain  the case.

Do you think Pokémon Let’s Go!’s gameplay should have stuck around? Let us know in the comments below! For more content, check out our articles on Pokémon Sword and Pokémon Shield: The Games We Were Hoping For? and Games That Deserve All Their Rereleases. Otherwise, keep it on Culture of Gaming for all things gaming!