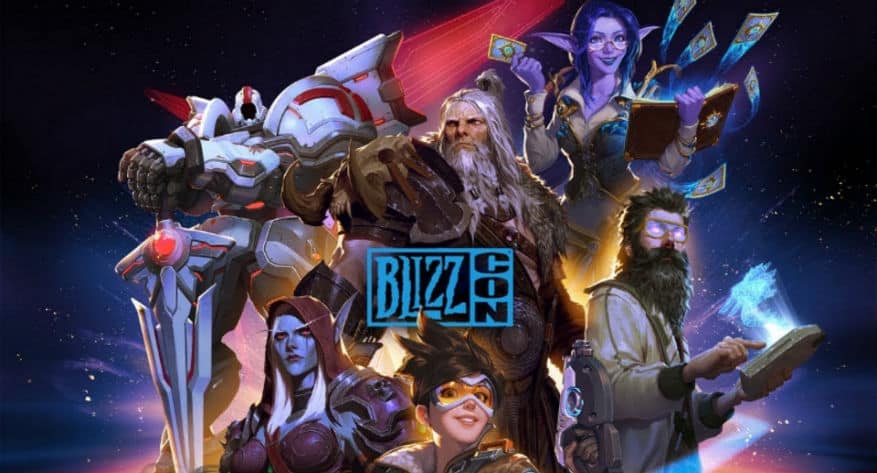 We are less than two weeks away from Blizzard‘s premier convention, Blizzcon and people around the world are can’t hold back their excitement about the event. Of course, if you were to follow the recent happenings of Activision-Blizzard, there’s an excellent chance you want to watch the show for other reasons. While last year’s event did have some nice announcements here and there, none of them left as much of an impact as their final announcement. An announcement so ill-received, it made Nintendo‘s Wii Music presentation look like Mozart in comparison.

What’s sad is that in retrospect, the gameplay trailer wasn’t that bad.  As a mobile title, it did look like a fun way to play Diablo on your mobile device. The biggest issue, though, was how Activision-Blizzard legitimately thought this game should be the title to close out their opening ceremony. And not just that, but also to hide the fact that Diablo Immortal, (which we had heard nothing about for almost an entire year by the way) wasn’t the Diablo 4 title fans were expecting, and yet they still chose to do this.

They could have done a stupid teaser image of “Diablo 4″ after showing Diablo Immortal, say “We will be sharing more details with you guys at a later date” and they could have prevented the embarrassment of people accusing them if this was an April Fool’s joke and asking their fan base if they have cell phones.

So as we move past Blizzcon from last year, it is hard to say if this year’s event will be any better or not. Even before the recent controversies facing Activision-Blizzard, one can argue the expectations for this year’s opening ceremony are now even higher than ever. It is one thing to fix the calamity of, “Don’t you guys have Cell Phones?” but it’s another to assure fans that you have more than just “updates” to your existing titles. There’s nothing wrong with updating and supporting your current claims, but it probably in their best interest to have some new titles showcase.

The rumor mill tends to work itself up as we get closer to these special events. And in this case, these leaks come from twitter user Metro_OW. The reason why many are watching what Metro has to say is due to what he wrote during Blizzcon last year. Before the event, he wrote the following on October 25, 2018.

Now, as funny as it would be to think Metro predicted Ash finally winning an Overwatch League (not counting the Orange Islands), we would later confirm the next hero to be “Ashe.”  That and he also said, “I also like Bob Ross,” which could have also been a reference to Ashe’s Butler buddy, B.O.B.

So could this mean we should take everything Metro has to say about Blizzcon 2019 to heart? It’s hard to say, but with the things he shared with his followers, it could certainly be a step towards Blizzard fixing their image with their fans. So what could we see at Blizzcon 2019? Let’s take a quick look at the two prominent topics.

A couple of months ago, Kotaku’s Jason Schreier wrote a fascinating article covering Blizzard’s upcoming plans. While it is a shame that Blizzard did cancel another Starcraft title, the reasoning behind this was to “put more resources into the Diablo and Overwatch Franchises.” While there was mention of a possible upcoming Diablo 4 and Overwatch 2, we didn’t have much else to work with outside of how the forthcoming Overwatch 2 would have an abundant PvE element that one could compare to Left 4 Dead.

Of course, we had no additional information since that time, but with these leaks from Metro, he did make a few bold statements. While the Overwatch portion of Blizzcon tends to come with a hero announcement or a few other tidbits, apparently, there will be no new heroes announced. In no particular order, here are some of the things we have to look forward to when they talk about Overwatch.

No new heroes? And not an expansion?

While all of these things can happen, a few tidbits do sound a bit off.

To start with, a leveling system wouldn’t be that hard to see since plenty of games do make use of similar systems. We can even point to Heroes of the Storm, showing how you can make it where you can level up your account alongside whatever hero you are using. As for Augmenting hero abilities, you could say Heroes of the Storm did show how you can change up character abilities too, so if this were to be something you can do in PvE modes, it could be entirely possible.

Now could Overwatch two see this “leveling feature” carry over to PvP modes? That’s… harder to say.  For all we know, if Overwatch 2 were to get PvP, would it be like how it currently is with Overwatch? Or would it be like Left 4 Dead where you can control “special enemy units?” And if it were to carry over Overwatch as is, would this mean players can change up how their abilities work in-game and open a whole new wide range of strategy?

Most importantly of all is how we will be approaching the sequel itself as it would be hard to imagine if this game isn’t an expansion. A stand-alone sequel would be nice by all means, but if this is the next step in “competitive Overwatch,” one can’t help but ask if any collectibles players got over the years would carry over or if they will have to start from scratch. There are plenty of questions we could ask about the game, but until we see it for ourselves, we can only wait until we get the official details.

How much Diablo are we getting at Blizzcon?

So we can guess we will get some info for World of Warcraft and Hearthstone. We may also get updates for Heroes of the Storm, Starcraft 2, and a few other titles from their popular ongoing series. But we do need to ask ourselves, where Diablo fits into the equation. A good number of us probably could care less about Diablo Immortal, but unless they chose to cancel it without giving anyone a heads up, we should expect to see something for it. It would be awkward if we got no new information for the title, and Activision-Blizzard chose to keep quiet about it so that it doesn’t stir up any new hate.

As for other Diablo-related titles, one funny story from last year was how Diablo 4 got pulled at BlizzCon at the last minute.  If we had at least a small teaser of Diablo 4 going into production, they could have salvaged the presentation, but for them to choose not to was undoubtedly concerning.  The team working on Diablo wasn’t ready to announce as the title saw drastic changes over the last few years, but Blizzard said they did no pull any announcements from BlizzCon.

So this would mean that either the Diablo team made a choice to pull back on the Diablo 4 announcement last year and thus to make Diablo Immortal the way to end the show, or it was always the intention by Activision-Blizzard to have the show-stopping on a mobile game.  Either way, that certainly doesn’t make what we got last year anymore forgiving.

A New Game and A Remaster?!

So while we didn’t see Diablo 4 happen last year, many are in hopes that we will get something this year. Rumors are going wild that Diablo 4 is not a myth as images are popping up around the web, including one”Germany Leak” about artbooks for both Diablo and World of Warcraft. While it can be challenging to know what the details say in German, you do not have to speak the language to ready where it says, “Mit Uber 500 Artworks as Diablo, Diablo II, Diablo III, and Diablo IV…” 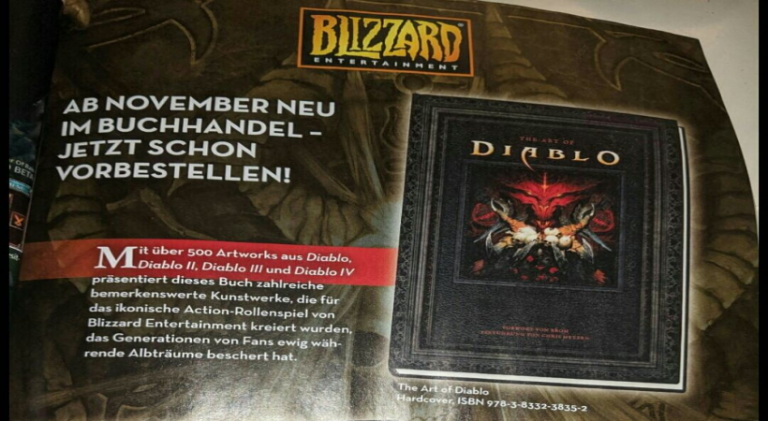 So there may or may not have been this one video that we could or couldn’t have at BlizzCon last year, but we are going to get an art book that will have things from a game that has not had an official announcement yet… And while it’s difficult to say if this picture is fake or not, if you type in the ISBN into google, you will see “The Art of Diablo” come up as a result (but nothing in the description saying Diablo IV).

Now as lovely as it would be to end it there, we might get to see one more Diablo title get an announcement.  While many players did enjoy the original Diablo, many would say Diablo II was truely where the series shined. The rumors have gone wild in saying that we could also see a remaster of Diablo II, to which if that were to happen, some fans would more than ecstatic. Hopefully, if this were true, we could get the chance to enjoy this before the 4th entry, but it could be a fun way to show the developers of the interest in the series on PC instead of mobile (at least on our side of the globe).

Honestly, it is that last point that can make any long-time fans of Blizzard slightly concerned since their recent actions. While they are in hopes that they can move past them as quietly as possible, the steps they took only make them look like they have something to hide in the face of all onlookers. Nintendo isn’t exactly happy about the sudden cancelation, and many believe that the ban that started this whole mess was still too strict about fitting the punishment.

Above all else, Blizzard‘s higher-ups should look at this year’s Blizzcon as “Do-Or-Die.” When you have Riot of all people now breathing down your neck and making announcements of titles that seem to challenge what you currently have, you need to make sure to assure your fan base that you are still the place to go for exciting and engaging games. The last thing you want to do is embarrass yourself the second year in a row and have players think that maybe it’s time to give up Hearthstone and check out Runeterra. Or abandon Overwatch for what their “Tactical shooter” could become.

Be sure to follow us here at Culture of Gaming for more articles on all things happening in the gaming world and any announcements (or the fallout) of Blizzcon 2019.