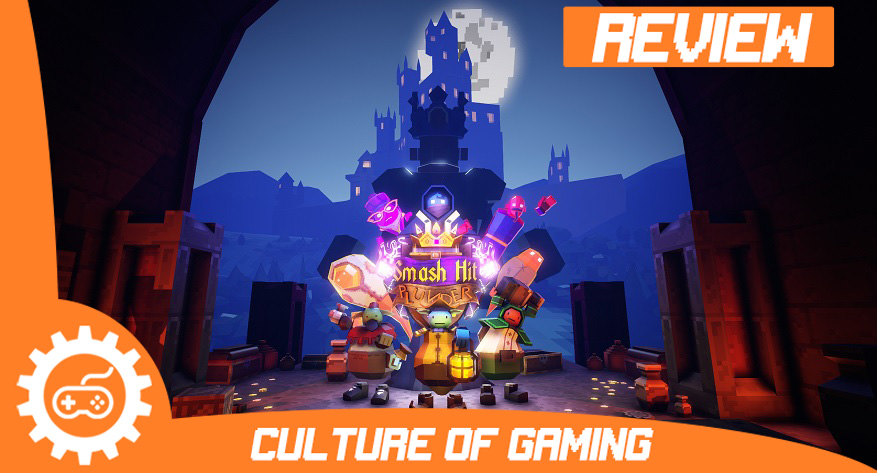 The heart and soul of Smash Hit Plunder lies in humanity’s innate desire to run amok in a VR environment. The best part is that you don’t even need to clean up after making a horrendous mess of the place. Burn food to a crisp, shatter priceless vases, and smash spiders with encyclopedias all in the name of money.

In Smash Hit Plunder, your goal is to rake in as much cash as possible within the time limit. Luckily, everything is hiding money. You become the human embodiment of the bull in the china shop. But of course it’s all for a good cause. The debt collector/demon Mordred has seized your family’s home and it is your responsibility to ransack your own home for valuables to pay him back.

Just like with any VR game I’ve ever played I picked up the first item I could find and threw it across the room. To my surprise that throw felt nice. Even though the weight of the item didn’t feel right, there was something about the physics that felt good. It’s almost like it was flying in slow motion, but the best part was that it travelled along the arc I expected it to. Most of the time throwing anything in VR feels downright awful. However, Smash Hit Plunder captures the sensation perfectly.

As I continued through the first level I was in VR bliss. A game finally encouraged me to wander around a VR world and destroy everything in sight. It was absolutely liberating. I could see this being a good way to let off steam. There’s just something special about stampeding around a room with reckless abandon, smashing everything in sight. The playfulness of it is exactly what VR should be. But of course, remember to use the wrist strap on the Move controller.

Speaking of which, the Move controller is quite the hindrance in multiplayer. Both multiplayer modes, Poltergeist Panic and Jewel Duel set different goals from the base gameplay. Whether you’re hunting for the ghost player or tracking down grandma’s lost treasure, the screen player has an advantage. The isometric view on the TV doesn’t reveal certain aspects of the level only visible in VR. However, the sheer simplicity of movement with a DualShock is a major advantage. Navigating the world in VR is intuitive, but it can’t touch the ingrained muscle memory of using a control stick.

At the beginning of the story, you encounter the ghost of your grandmother. She serves as a sort of side-kick. Not in the Robin sense, but more of the Alfred Pennyworth ilk. Grandma knows all about your home and helps you learn how to navigate the world around you. She’s more of an accessory than anything else. Her main purpose in the game is to act as a force that pushes you in the right direction. Grandma doesn’t venture into the levels with you, but she’s always back at the main room waiting to tell you about the latest room you unlocked.

As I mentioned previously, the demanding demon Mordred has gained possession of your family home while you were away at magic school. It’s a fairly nonsensical tale, but the way the story is told in a 3D space is entertaining. Instead of text being confined to boxes, it freely floats much like Mordred himself. Looking in the direction of the text is intuitive and builds on the overall magical feel of the game.

However, the stylized text as a whole is a flop. Much like how the floating words add to the mystical setting, the whimsical font does so just as well. When it comes to practicality, it’s not quite as useful. I have horrendous vision, but reading text is not an issue I’ve ever experienced in VR gaming. The PSVR headset is one of the lower resolution gaming HMDs on the market. Yet, Smash Hit Plunder was only developed for that headset. I could understand blurry text if the game had been optimized for a higher resolution HMD like the Vive or Rift. But, the text is just not very well configured for the display.

After countless VR titles where dropping an item is the difference between life and death, Smash Hit Plunder is a breath of fresh air. Normally, if you drop an item on the floor in many PSVR titles, you’re gonna have a rough time picking it back up. Never fear, magic is here.

Since the player character is a warlock you have the godly ability of picking up items that are on the floor. A simple press of the trigger on the Move controller pulls the targeted item towards you. It’s a smart way to use the magical aspects of the story to make gameplay more enjoyable. You can also tap and release the trigger to send an item flying behind you. It’s a simple concept that I’ve seen far too many VR games do unintuitively. The preservation of momentum in items feels natural and it makes clearing priceless china off a shelf so easy.

This ease of throwing items carries through to all parts of gameplay. Normally, I would be annoyed by the fact that everything feels like it has the same weight when thrown. However, I love this decision. It makes the game feel more consistent. Then when you’re trying to smash a spider for a small bonus you can grab a thick book or a cast iron cauldron and know exactly how to hit that little bugger.

I love the way this game controls, but I can’t stand looking at it for too long. VR nausea isn’t an issue, rather the Minecraft-like blocky graphics are unappealing. The textures are incredibly simple and bring you straight out of the world. What I look for in VR is an immersive experience. Every aspect of Hit Smash Plunder makes it clear that I’m in a game. Even the physics of thrown items is an issue looking at the game in terms of immersion. I like that the throwing arc is realistic, but throwing a log like a frisbee into a fireplace is a glaring reminder that what I’m doing isn’t real.

The worst part of Smash Hit Plunder is the repetition of gameplay. You go into a room and you smash a ton of stuff. Then you collect the money the broken items drop. This money builds up a score that wins you up to three crows per level. Like many mobile games, you need to collect specific amounts of these crowns to progress through the game. So, it’s on to a new room to smash everything up and collect some more coin.

But, what makes the gameplay just that little bit more unbearable is the timer. There’s no HUD in the game. You have to pause to see the timer and how much money you’ve collected. Music starts playing when there’s about 45 seconds left in a level. This notification comes far too late to make any real difference. By the time it kicks in, you’re likely out of luck if you haven’t reached the quota for the level.

Smash Hit Plunder is an okay game. It feels like a step in the wrong direction for the future of VR gaming. It’s fun enough to mess around with for a couple hours. Any longer than that and you start to get bored with the repetitive gameplay loop. The only redeeming modes are in multiplayer when the goals are changed. With other more immersive and similarly priced PSVR titles out there, I can’t recommend Smash Hit Plunder.

Reader Alert: Smash Hit Plunder is available digitally and via retail outlets such as Amazon and Best Buy.

THE GOOD
Item physics
Destroying everything is cathartic
Enjoyable multiplayer

Smash Hit Plunder is a fun game at it’s core. This is made evident in multiplayer. However, the repetition of the single-player is draining. Throwing priceless items all over a room is a fun experience. But, the point of VR, immersion, is constantly broken with unpolished graphics and ridiculous physics.