Skating Games – Are They Dead? 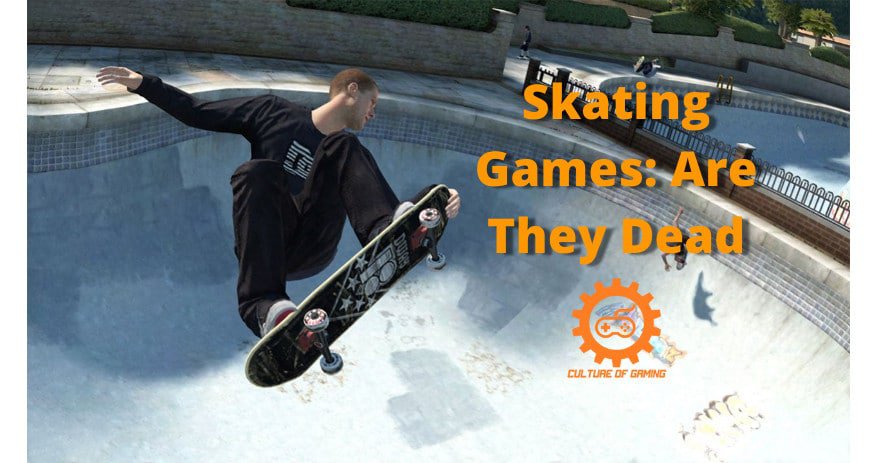 Way back in the nineties, when the Playstation was a new platform still making it’s name. Anthropomorphic animal mascots were all the rage and Lara Croft’s cleavage could poke your eye out. There was a game that took gaming world by storm. That game was a skating game aptly named Tony Hawk’s Pro Skater

Just for context, in the nineties skateboarding was not a popular pastime. There is a misconception that skating was always popular. However, after the likes of Bones Brigade, Downtown and Z-boys in the eighties. The skateboarding scene had gone pretty quiet. However, that was all about to change.

The Tony Hawks series offered a arcade style time trial challenge mode. Where players would have freedom to complete combos, hit high scores and land some insanely unrealistic tricks. The levels were varied and offered a series of well designed levels for players with just enough realism to keep it relatable to the toughest critics for the title, the skating community. Yet with enough over the top mechanics and design choices to keep casual players entertained. Safe to say, it was a massive success.

The titles under the ‘Pro Skater’ umbrella would raise the bar on the quality and scale each year. Keeping the same formula but adding more interesting levels, modes, multiplayer facilities, improving graphical details. Not to mention keeping the soundtrack full of bangers.

Throughout this run, a plethora of games would try and latch onto the craze of extreme sports in gaming. We seen the likes of licenced entities cashing in on the idea. The Simpson’s Skateboarding being a prime example.

Then there were games that took the concept and tried to put their own unique spin on it. Most notably Airblade which would take a more futuristic approach with hover boards over wheels on the ground action. Long story short, every developer was shooting their shot. All in the hope of being the brave knight to usurp Tony Hawk’s from the throne.

There were decent attempts at creating Tony Hawk’s archetype games. Some were genuinely made with love and care. However, the problem for these developers always remained the same. They were simply tweaking an already polished and popular formula. There’s a reason Coca-Cola has remained so popular despite the copycats.

So Tony Hawk’s for over a decade would remain the master of the genre with basically a complete monopoly on the market. Neversoft’s skating franchise was seemingly untouchable. All they had to do was keep moving with the times and keep producing great titles. So why did the franchise drop off.

It all began with the underground series. This was neversoft’s attempt at bringing story and narrative to the game. To their credit, the first installment was a roaring success. It had it’s critics, however it gave a realistic and relatable story to navigate. Whilst keeping the familiar formula of picking up challenges which had began in Pro Skater 4.

The story had twists and turns, voice acting from big name skating legends, plus a fair share of iconic challenges, levels and moments. Who can forget that Mctwist in Hawaii. Sadly though, this would not remain the case for long.

If you’re aware of the term ‘jumping the shark’ made famous by the show Happy Days. This show was a happy go lucky sitcom that had relatable stories and great episodes in its library. Its a classic American sitcom. Though there was a clear moment where the show lost its way and it was time to call it a day.

In one episode, iconic character ‘The Fonz’ ski jumped over a shark. Now if anyone is aware of the usual goings on in the show. You’ll know this was a ludicrous and unrealistic event even for a TV show. So now when any form of media does more and more ludicrous things to keep the consumers attention. They jumped the shark. Tony Hawk’s done just that.

THUG2 was the beginning of this. The player would be tasked to go on a worldwide tour causing destruction in their wake. With Bam Magera being a key character in this story its more than likely they were cashing in on the Jackass craze of the time. However, what transpired was event after event more ridiculous than the last.

This would include finding Bigfoot, expelling ghosts from a cathedral or raise the dead in New Orleans. All ridiculous. Though if considering the cast and aim they were going for. This could still have been considered a fun departure from the norm. The issue was that they just kept going.

American Wasteland would offer a completely unrealistic experience. Delivering a comic book version of skating. The goal was to create a over the top super skate park. Again this game had its pros and was a fun title. The issue was that the fun was superficial.

There was no grit or realism. No relatability and it only served to alienate those who loved skating. They began making skating games for the casual player above who made the game successful to begin with. Neversoft would return to its roots but it would be too late.

Too Little, Too late

Project 8 would be a return to realism for the series whilst still in keeping with the last few titles. There would be a ranking system for the player to climb through doing challenges. Interesting areas and continued with an open world experience established in American wasteland. Not to mention a well implemented slow motion feature for intricate, show stopping tricks.

Alas, it would be a great game that would be undone by its competition. EA Skate would come to the forefront of skating games. Showing players a more realistic portrayal of skating in gaming, offering a stellar graphical overhaul to the genre and offering a brilliant, if a little small, punk soundtrack. This was the way forward for the genre. It was a game that was produced with skaters in mind. So for that reason, Tony Hawk’s had sang it’s last song. Or at least it’s last one in tune.

Made With Skaters In Mind

Skate would then go from strength to strength. Producing a second and third installment, each being backed by more and more pro skaters. Some of which even lending their voice to the game. Not to mention Skate 3’s real life intro involving a whole cast of Pros.

There would also be a lovely online community that would compete, free skate and build interesting and exciting skate parks. All of which are still accessible to download through the online channels.

Bowing Out Without Grace

Meanwhile, Tony hawk’s wasn’t doing down without a fight. A really embarrassing and debasing one but a fight nonetheless. They would create a series of lack luster titles. Names such as Downhill Jam, Proving Ground and Ride being horrible attempt at clawing their way back to former fame.

The peritheral for Tony Hawk’s Ride was particularly bad. It was heavily endorsed by Tony himself and was said to be like skating for real in your own living room. However, it was more like tilting a plank of wood with your feet. Plus it was not a responsive piece of wood.

The Final Nail In The Coffin

Then in a last grasp at the cliff face before the franchise plummeted into the abyss. There was the critically panned and downright broken Tony Hawk’s Pro Skater 5. This game would be a call back to the glory days of the series. It would be a classic arcade time attack setup. However, it would not achieve the same acclaim.

The game would be full of bugs at launch. Some of which were laughable, others made the game unplayable or impossible to proceed in the game. Then there were problems that made the title crash altogether. The developers would produce a patch shortly after launch which would unbelievably be larger than the whole base game. Though by this time, the game had been dead and buried, refunds were being sought in excess and long time fans were left disappointed.

They’re Great, So Why Are They Gone

So back to the topic at hand. Why are skating games dead. Well for some very simple reasons. Firstly, the market has always been reliant on one series to carry the genre. Skate has been the newest carrier of this torch and it remains a popular franchise. So why does EA not produce another sequel.

For a lack of a better response. We do not know. Its seems like a no brainer. However, EA have refused to confirm or deny that they will enter the market once again. Though no news could be seen as good news. We can live in hope.

Then another reason for the genre being dead is that no one can pick up this torch. Yes there have been successful titles such as Olioli that have offered something for the fans. However, there has been no competition for the big names in the market. It can be daunting to take on such a high risk project. Especially with the commercial failings of Tony Hawk’s in the last decade.

Is There Still Hope?

Though their may be hope for the genre yet. Games company Easy Day Studios producing a new skating title set for release in 2020. This game will be titled Skater XL and is set to be the returning of triple A skating to our gaming library.

As a massive fan of the genre, one can only hope that more generations of players get to witness the joy that these games have to offer. With the success of various sports games, it would seem amiss to have no skating representation. So if we all pray real hard right now, maybe EA will make one more Skate. Just one more lads. That’s all we ask.

That’s our views on the skate game genre. Do you think there will be a new Skate? Does Tony Hawk’s still have hope of returning to its past glory. Will Skate XL be the game that we have been waiting for to will the void? Let us know in the comments. Plus if you like our content why not check out our list on wholesome gaming communities. Or perhaps our UX review of Final Fantasy VII. I’m callum and thank you for reading COG!