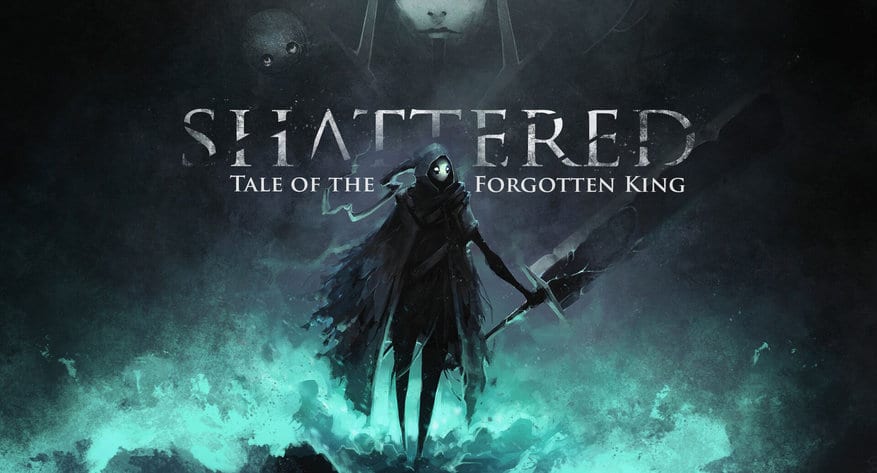 There seems to be a burgeoning subset of souls-like games which seek to combine the combat style of Dark Souls with another style of game. Absolver combined the formula with detailed melee combat like in a fighting game, while Necropolis transplanted the Dark Souls design into more of a dungeon crawling setting. Following in this trend comes Shattered: Tale of the Forgotten King, a new entrant hailing from France. Shattered intends to combine the Souls formula with the world-building and storytelling of games such as Legacy of Kain and Shadow of the Colossus. Do they succeed? Let’s find out.

Shattered: Tale of the Forgotten King has a look that is best described as “mostly unique”. The atmosphere of the areas, and the design of the enemies is clearly distinct to this game. The playable character, however, shares a similarity to the protagonists of Necropolis and Absolver. The body shape and mask harken back to these titles quite strongly. Similarly, the art style is reminiscent of something like Absolver or even Dishonored with everything having a lower-poly painted look to it. That said, the art style errs on the side of depressing and bleak, with a lot of grey and washed out color, rather than vibrant colors. These color choices reinforce the narrative of being adrift in the Void and do look quite good, if not a bit derivative.

The storytelling is very much how you’d expect a story to be conveyed in a game like this. Bits and pieces are told while the whole story is left to the player to piece together. All you set out with is the knowledge that the King made everything, then he left. Now it’s all gone to hell in a handbasket. Boss fights are mainly aimed towards defeating the 12 Demiurges, the bad guys who are keeping things firmly in the realm of “not good”. Lore notes are strewn throughout the land, and your little friend “Whisperer” gives cryptic details at certain points. Despite the developers’ best efforts, I fail to see the resemblance to Legacy of Kain: Soul Reaver in storytelling and environmental design, though there may be more further along in the title. While the inspiration may be there in the creative process, I don’t see it in the overall product.

The Essence of Gameplay

As mentioned before, Shattered: Tale of the Forgotten King draws upon the Souls games as an influence. The most obvious example is the gameplay, which functions very similarly to games of its ilk.
Light and heavy attacks constitute the player’s melee capability, while a relatively unforgiving stamina bar governs the ability to attack or dodge. There are some differences though. For one, there is no shield. Instead, a player can only parry or dodge an attack. There is also a ranged attack which consumes its own meter.

Movement is also a bit different, with more mobility than would be present in a traditional Souls game. Dodging is notably a bit slow but this is made up for by having a dash which can be activated by dodging in the air. This dash is invaluable for avoiding attacks and traversing the terrain, especially when exploring rooftops. Attack speed is slow and methodical which works for the most part, but does make tackling multiple enemies a challenge.

There are puzzles in the game that bar progression, though these are relatively sparse and not incredibly challenging. The first puzzle, for example, appears challenging but looks much harder than it actually is. The puzzles are always fair, they just require some contemplation to solve.

The Sounds of Silence

The sound design is a bit of a mixed bag in Shattered: Tale of the Forgotten King. The music sounds great, being dramatic in boss fights and melancholic during normal gameplay. Music isn’t always present in areas, so it is noticeable when it plays in the background. The menu theme is contemplative and depressing, and really evokes the feeling of desolation the narrative is going for.

The actual in-game sounds are less impressive, however. The sword impact sounds are lacking, to say the least. Hitting a hard surface reminds me of hitting a large pot against a surface. Conversely, hitting an enemy generates a lacklustre thud. Both aren’t particularly an issue, but they don’t give the auditory feedback one might hope for. Another sound for complaint is the gunfire. Firearm enemies shoot repeatedly and their guns make a sound that’s certainly unique. It never changes and it happens ad nauseum until they are killed. Again, not a dealbreaker, but I can see it causing players to reach for the audio sliders.

Enemy sounds are much better, with growls and death sounds being very effective and sometimes quite intimidating.

This game is in Early Access and it shows. Bugs abound and aspects of the game just aren’t implemented. To their credit, Redlock Studio are working tirelessly to fix and update the game as new issues are discovered. I don’t quite see how the influence of Legacy of Kain and Shadow of the Colossus has translated to this game, although maybe that will become clearer as the game is fleshed out.

As it stands, Shatter: Tale of the Forgotten King is a solid but flawed game, and is difficult to recommend in its current state.

(Disclosure: Code was provided by the developers of the game, Redlock Studio)