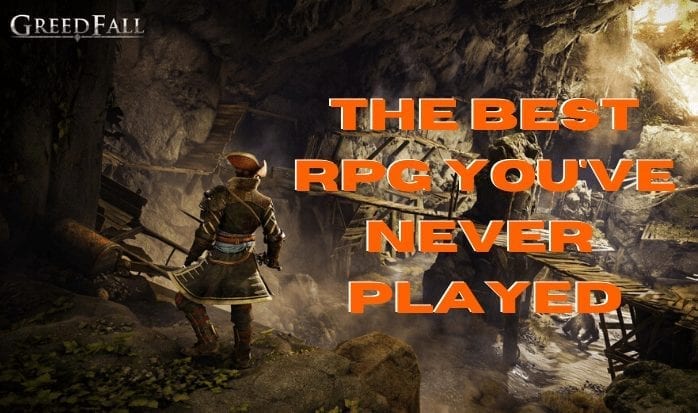 GreedFall is perhaps one of the most underrated RPGs in recent years. Developed by Spiders, the game takes place in a world inspired by 17th century Europe. It draws on many classic RPG elements and immerses the player in a world of danger, adventure, and excitement.

RPGs are characterized by their storytelling, exploration, quests, character customization, and skill/experience building. What makes GreedFall a great RPG is the way it honors many of the classic RPG mechanics. It is the first RPG that has felt like an RPG in a long time. From its combat to the choices you make, GreedFall is a fantastic game to lose yourself in.

Note: there are no spoilers in this article.

See the trailer for GreedFall below.

Though the Merchant Congregation is suffering through a plague, they have remained neutral in a war that rages through the Old Continent, particularly between the other two nations you’ll interact within the game: Thélème and the Bridge Alliance.

De Sardet is set to accompany their cousin, the son of the Merchant Congregation’s leader, to a newly discovered island called Teer Fradee. Ultimately, your goal is to find a cure for the plague. But you’ll also need to navigate diplomatic relationships with Thélème, the Bridge Alliance, and the natives of Teer Fradee.

GreedFall‘s themes rely heavily on colonization. When you interact with the nations of the Old Continent and the natives, you’ll find the line between good and bad is easily blurred.

GreedFall prides itself on character customization. According to the website, you can “Choose your gender, customize your appearance, and select a few starting attributes,” all of which help create a character that is truly unique.

When you first customize your character, you’ll choose between three classes: warrior, technical, and magic. You are also given three skills and recommendations for attributes to start with. For example, each class specializes in different types of combat and play style. While you can choose any attributes for your character, certain ones are better for your class than others.

The game’s leveling system is extensive. You’ll need to carefully choose what skills, attributes, and talents to level up. On your character menu, you’ll find a section titled “Character Development.” In this section, you can put points toward skills, which you’ll earn every time you level up, and talents and attributes. However, what upgrades you choose will require planning and thoughtfulness.

Regardless of the class you choose, the skill tree is the same. You will have access to one skill point every time you level up, and you can also find bonus skill points through exploration. Skills are categorized based on class. However, you can choose to upgrade skills in a different class if you so choose. However, it’s recommended you upgrade your respective class skills first.

Attributes, which take a while to level up, help you unlock access to better armor, weapons, and other accessories. You are given an attribute point at the beginning of the game, and a new point is given every three levels. Forbes has done a good job of breaking down what each attribute unlocks. Here’s a summary:

As I mentioned before, certain attributes are better for your class than others. For example, if you’re playing as a warrior, you won’t want to upgrade the mental power and willpower attributes. Instead, the game recommends you upgrade strength and endurance.

Talent points will require more forethought than skills or attributes. These points are only given every four levels, and you can only upgrade a talent three times. Talents unlock and improve character abilities.

There are six talents total. Charism will reduce merchant prices, improve your companion’s combat abilities, and make persuasive dialogue options more successful. Science will unlock potion and ammo crafting and give you the ability to destroy weak walls blocking your path. Craftsmanship will allow you to craft armor and weapon upgrades. Vigor grants you access to paths that require balance and allow health and magic to regenerate in combat (which is not a passive ability initially). Lockpicking unlocks, well, lockpicking, and also makes enemies easier to see. Finally, intuition grants special dialogue choices increases loot and makes gathering spots easier to see.

While GreedFall has recommendations for talents based on your class, sometimes it is best to upgrade other talents first. While combat will solve many of the challenges you face, sometimes tact will get you a long way. It may be ideal to spend talent points on charisma first, so you are able to calm situations, sway adversaries, or help your companions.

Ultimately, character customization and upgradable skills are classicly RPG. With this leveling system, you can design a character that is your own.

Combat in GreedFall stays true to character customization. You also have access to a tactical menu that pauses combat and allows you to lay traps, drink potions, shoot firearms, and a number of other actions. However, the combat can be a little challenging (and occasionally infuriating). Consuming a potion or laying a trap takes time. In the midst of combat, taking a second to complete actions can make you vulnerable to deadly attacks. In difficulty settings “Normal” and up, it is easy to become overwhelmed by enemies.

Additionally, your companions (who also have specialized classes) can be knocked out during combat. Though you can travel with two at a time, enemies can knock them out, leaving you the sole defender. Be sure to use caution when approaching enemies and save often.

Luckily, you can sneak up on enemies and take a few out before they notice you. Stalking behind them and attacking them will kill them without immediately alerting other enemies. This is useful when exploring the untamed world of Teer Fradee.

Enemies range from Teer Fradee’s unique wildlife to soldiers on the battlefield. Though none of them have unique weaknesses or strengths, they do make GreedFall feel much more unique.

Decision Making and Companions in GreedFall

Decision making is a crucial part of GreedFall, as it is with any RPG. You can destroy alliances and mend relationships, which will affect the outcome of the game. Be careful with the decisions you make, especially if you value diplomacy.

Characters and nations have an approval system in the game. Siding with characters from the Bridge Alliance, Thélème, and Teer Fradee natives will improve your relationships with them. However, it is very difficult to side with one of these groups without harming your relationship with others. Learning what each nation’s values are will play a vital role in your decision making.

The approval system also applies to your companions. Completing personal quests and making decisions can earn your companion’s respect or make them distrust you. And, depending on the gender of your character, you may also initiate a romantic relationship with one of your companions.

There are five companions in total: Kurt, Vasco, Siora, Petrus, and Aphra. Earning their trust and becoming their friend will grant you access to some of their talents. For example, becoming friends with Kurt will give you access to his craftmanship talent. Being able to access talents will be useful should you decide not to spend talent points in that area. As a result, investing in the relationships, you build with your companions is crucial and can impact the gameplay.

Should You Play GreedFall?

If you’re looking for a game that honors classic RPG mechanics, then yes, you should. The game was nominated for 2019’s  “Best RPG” at the Titanium Awards. It has been well-received by IGN and Game Informer.

The game provides you with a massive, culturally rich world to explore, engaging combat, and the option to choose. I have not felt this excited about an RPG in a long time.

If you want more on RPGs, be sure to check out “Skyrim: Did it Actually Revolutionalise RPGs?” written by Will and myself.