The Worst Official Game Controllers to Ever Exist 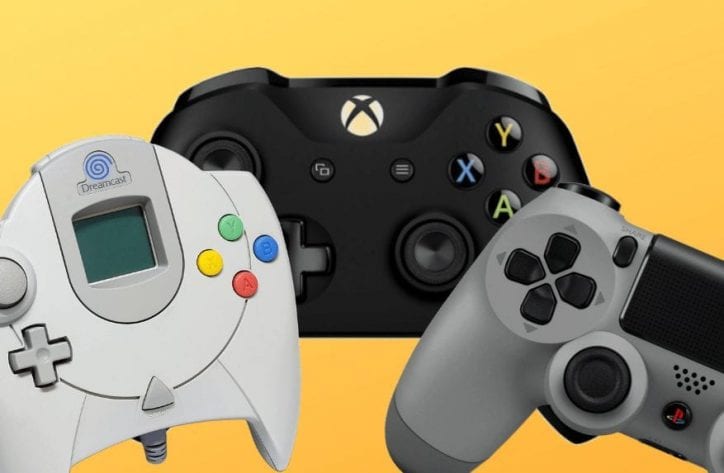 When playing a game, the controller acts as an extension of ones self. There’s an almost primal bond between player, controller, and game that can’t really be described, especially when they can pick up the controller and understand a game almost instantly. Sadly though, that requires the controller to actually be good in the hands. Which is why it surprises me to realise that some companies have had the literal worst official game controllers to ever exist.

A controller is supposed to be ergonomic, not feel like a brick with nails coming out of it… that’s on fire… and as heavy as a black hole.

So today I want to take a look at some of the worst official game controllers ever created. That means no Mad Catz. Sorry.

Starting strong, we have the Fairchild Channel F Jet-Stick Controller. You’d be forgiven for never seeing this before, releasing in 1976 it was part of the Fairchild Channel F – the first ever console to use programmable ROM cartridges as a way to play games. To be honest, that’s all it’s known for, well that and being one of the worst official game controllers.

Now onto the controller itself, you’d hold it like a joystick, but couldn’t really use it to any sort of comfortable degree. The grip at the top could be moved in 8 directions, pushed in or pulled up, or twisted to act as a paddle.

You can even see it in action online, and it’s safe to say that it… doesn’t impress.

It might be an ambidextrous controller, but it’s not really going to provide a unique experience for Videocart 7: Math Quiz II is it?

See that small round nub on the bottom left of the PSP? Did you think that was a speaker? Well it’s not, it’s a control input.

What I can only affectionately call the ‘nub’ – this control method alluded me for years. Young me would be trying to play Daxter using the directional buttons and getting nowhere, only to move slightly every now and again. It took me years to realise that it was a control stick I was nudging.

The ‘nub’ just glides around in a circle, making it incredibly difficult to get a decent grip. The PS Vita did a slightly better job with this, having the sticks raised and with at least some grip.

It’s a massive shame as well, the PSP had some great titles on it.

First off, the analogue joystick was unreliable thanks to it using a rubber boot over springs, and on top of that how’re you supposed to hold it? It doesn’t fit snugly in the palm on your hand, and you don’t want to be hunched over trying to make sure you’re pressing one of its 12 face buttons, right?

Although it all comes down to the fact that the joystick is non-centring, which makes most games essentially un-playable. Arcade titles where notoriously complicated to control because of this, meaning simple games, or games with little going on in the way of controls, were difficult to play.

It could play great home versions of arcade games, but the Atari 5200 has one of the worst official game controllers.

“You are the controller.” – Sounds like an excellent marketing move right? Not if the person you’re saying that to is a 2 month old toddler.

Microsoft’s Kinect promised an easy way for the casual audience to get behind video games. On paper having your entire body be the controller, you know, that thing you use every single day to live, seems ideal. You don’t need to teach anyone how to move, how to dance… even if you wish you could.

Sadly the execution of this hopeful Wii killer didn’t pan out as expected. It just didn’t work like it was showed too. The picking up of movements was mostly dodgy, it felt clunky, and having to move in-line with the screen actually took a lot of us out of the experience. The Kinect managed to do the opposite of what it wanted to do.

And who wants a glorified webcam staring back at you all the time? No-one. Making this one of the worst official game controllers ever.

Just look at it…

Coming with the Viewmaster Interactive Vision, this controller would “help” players play VHS movie games. Sounds cool on the surface right? Well when it only has 7 games you can actually play, from Sesame Street to Disney, which shouldn’t leave you with high hopes.

The only saving grace for this controller is that the games don’t exactly require a series of complex inputs, but…

Just look at it!

What is going on there, it has a stick, 5 buttons, and looks completely alien. How’re you supposed to hold it? Do you leave it on a flat surface? I literally have no idea.

That’s it, our look at some of the worst official game controllers to ever be made. They aren’t pretty, and they certainly don’t function well. Controllers are supposed to be an accurate reflection of the player, and these were anything but that. They don’t inspire immersion, they don’t make playing easy and fun, and they certainly don’t make sense.

What’re are your picks for the worst official game controllers? Let us know in the comments.

Why not check out our news stories here? Or follow us on Twitter @thecognetwork to keep updated! As always though, thanks for reading Culture of Gaming.