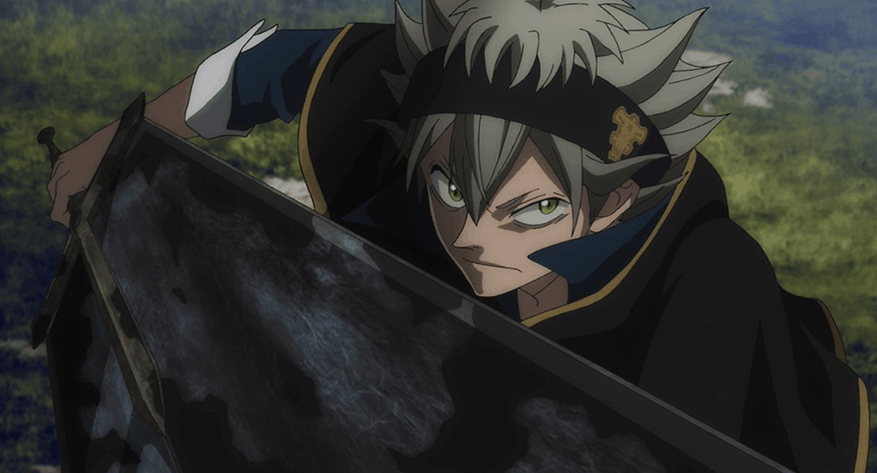 98 episodes later, Black Clover is worth the watch. Originally airing in the Fall 2017 season, Black Clover began competing in the anime space for the next poster child of Shounen anime, in a time that had recently seen the end of some of the most recognizable franchises like Naruto: Shippuden (Boruto not withstanding), Black Clover was looking to usher in the next generation of long running Shounen franchises. And it’s initial reception, wasn’t fantastic. But I’m here to tell you, that 98 episodes later (and to clarify, I don’t mean you have to slog through said 98 episodes before it picks up), Black Clover has come leaps and bounds from where it once was.

As aforementioned, Black Clover wasn’t incredibly received when it originally started airing. The primary complaints being that the main character, Asta, was absolutely insufferable, and more so in the sub, due to him screaming. The English dub had the same affliction but to a lesser extent. Which is why I started watching the English dub over the sub very early on just to make things a bit more tolerable. To further address the screaming point, I think one can only really speculate why this was in the show. Maybe it was supposed to be some sort of gimmick or speech tic or something, but the bottom line is that luckily, Black Clover kicked that habit fairly early on. By the time Asta leaves his home village, I would say the screaming is all but stopped. I understand first impressions are important, but at least in this case the show noticeably improved.

The other primary point of contention surrounding the show was it’s incredibly slow pace. Taking an episode or two, sometimes maybe even three, to progress through the equivalent of a chapter in the manga source material. While this is still somewhat the case, as Black Clover will definitely take its time with say battles when it wants to, I would argue this is somewhat inherent to the greater Shounen genre as a whole. Furthermore, one thing to praise Black Clover for is that it is sparse on what feels like pointless flashback or filler episodes. This isn’t to say that the series is completely void of them, but when they do occur, at the very least they always feel relevant and not a total waste of time, somehow managing to advance the overall story forward, even if it’s just by a few inches. Another strength of Black Clover’s filler or flashback episodes, is that character motivations are at least partially understood. This is in contrast to say Naruto, which became absolutely notorious for having miles upon miles of filler episodes.

Shounen Through And Through

As previously mentioned, Black Clover is a Shounen anime, and it doesn’t throw any punches with regards to that. Shounen is certainly in the show’s DNA, and it doesn’t try to be anything that it’s not. The characters, their relationships, tropes, and overarching themes and story structure are all classic Shounen. Black Clover doesn’t try to do anything necessarily new to the genre, but rather, in that space, it ends sup excelling at what it does.

The character types are nothing new, but their personalities are all turned up to eleven and are given their own flair of personality. Because of this, one of the most interesting aspects of the show takes place. Perhaps the singular most entertaining thing in the show, for me at least, is how all the characters interact with each other, and how entertaining it is to witness. All of the characters feel and come off as unique and genuine, and because of the added flair, the result of character interactions are an absolute blast to watch. For example, when the over the top, overly ambitious Shounen MC Asta interacts with the extreme tsundere Noelle, the moment is always cute or funny. Alternatively, when the overtly sarcastic Captain Yami meets with the outwardly naive but incredibly wise Wizard King Julius, and once again the result is entertaining. 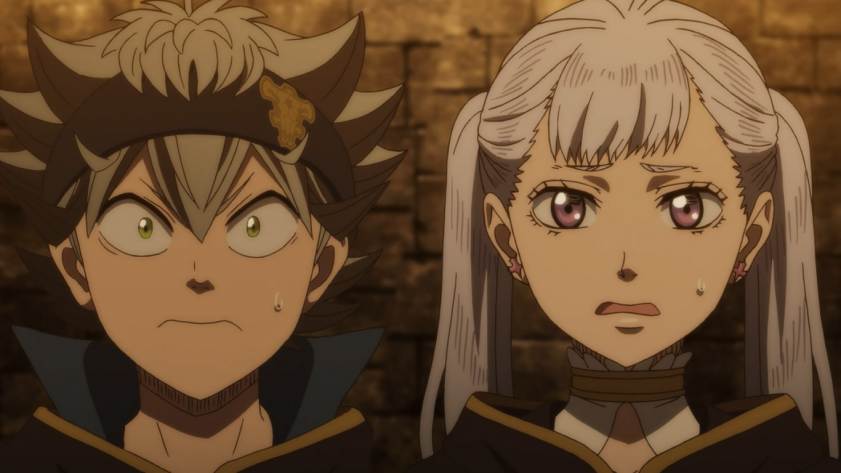 But, after all, what’s a Shounen without battles? Black Clover does a very good job at spacing battles between the more slice of life parts of the show. This is perhaps partially attributed to the slower pace the anime adaptation takes. However, one thing can be said for both the battle and non-battle parts of the show, that the story always feels like it’s moving forward in one way or another. Anyhow, the battles are, for the most part, very good. There’s only been one sequence that I thought dragged on for way too long, especially compared to similar fights that would occur later on in the series. Past that one gripe, most of the battles don’t take an egregious amount of episodes to resolve. Once again, the story always moving forward in some way.

Another praiseworthy aspect is how controlled the power-creep is in the show. All of the characters’ power progression feels natural and like a gradual ramp. I cannot recall an instance of an out from left field, “I Win” button, with every new ability or mechanic introduced in the arsenal of the characters having been either hinted at or sensibly led up to the use. The opposite end, of course, is that the enemies do somewhat remain static in their power levels. The result is that we end up seeing a noticeable and logical desire of the heroes to improve their powers, in order to match the villain’s power levels. Black Clover doesn’t stray away from displaying how outclassed some of the characters are. Another point of praise for the fights is the hype that the show is able to generate surrounding them. The fights always feel like there is something at stake, and you as the audience feel genuinely excited to watch whatever is about to go down.

Perhaps my biggest piece of criticism for Black Clover comes from the highly varying animation quality. While the overall trend of average animation quality has only gone up since the show started, the show still suffers from having both extremes of animation quality occasionally on display. This could be easily explained away by say the aspect of budgeting or time management, but it is still worth bringing up. The fights are, for the most part, very well done and animated. With a lot of effects and animations in the fight sequences generally having me on the edge of my seat in awe of the power on display, there are of course instances where the animation quality isn’t incredible during the fights. I won’t rag on a notorious, particular episode for being poor, as the director attempted and experimented with a particularly new style, but the fights can vary between exceedingly well animated and powerful, to looking like they were done up and animated in Microsoft Paint. I’m certainly not saying that Black Clover is the only show, especially Shounen, where this phenomena occurs,  however it is still worth mentioning as a fair point of criticism.

And, that really sums it up. Not just in the fights, but throughout the show, there is a large variety of animation quality. An overall trend that I’ve extrapolated has been that the more menial, comparatively less important episodes or sequences have a poorer animation quality then the more important or impactful sequences. This I suppose would make sense, considering things like time, budget, etc. But, a point of praise, perhaps the most impactful sequence of Black Clover thus far, is a sequence that occurs in the episodes of 93 and 94. This particular sequence was an absolutely gorgeous spectacle to watch, having been beautifully and diversely colored, and was such an outcry and display of raw emotion from the characters involved, that quite frankly it stacks up there with some of the best sequences one could find in a Makoto Shinkai film. This was one of Black Clover’s biggest moments, and it certainly didn’t blow it. 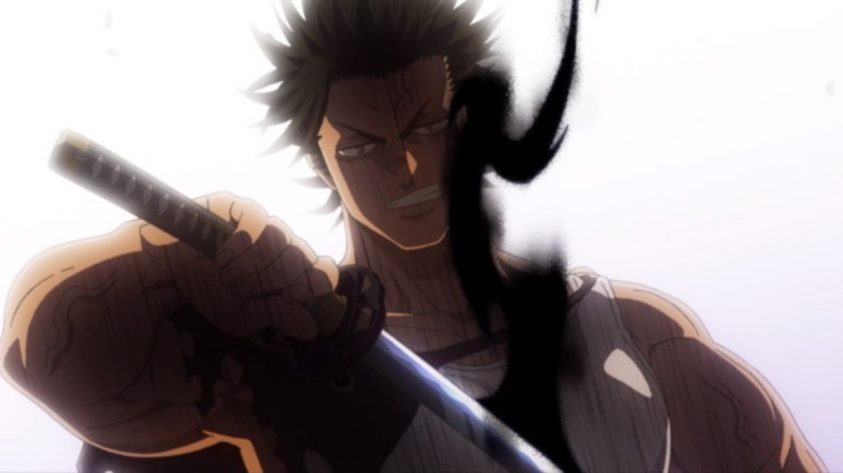 Black Clover is a fantastic show and is something that I think anyone with a remote interest in should pick up, as well as anyone who may be abandoned the series early on should give another shot. The characters are all unique and entertaining, and it has some of the best fights I’ve seen in a Shounen. But, of course, the show may not be for everyone, which is of course fine.  This was simply my analysis and advocacy as a self-admitted fan of the show.

Thank you for reading. I wrote about a comparatively much subtler anime called Log Horizon, which you can find here. Also, speaking of Shounen characters, check out our thoughts on Shounen characters in fighting games here. For gaming news, analysis, reviews, and occasional opinion or anime piece keep it here at Culture of Gaming!