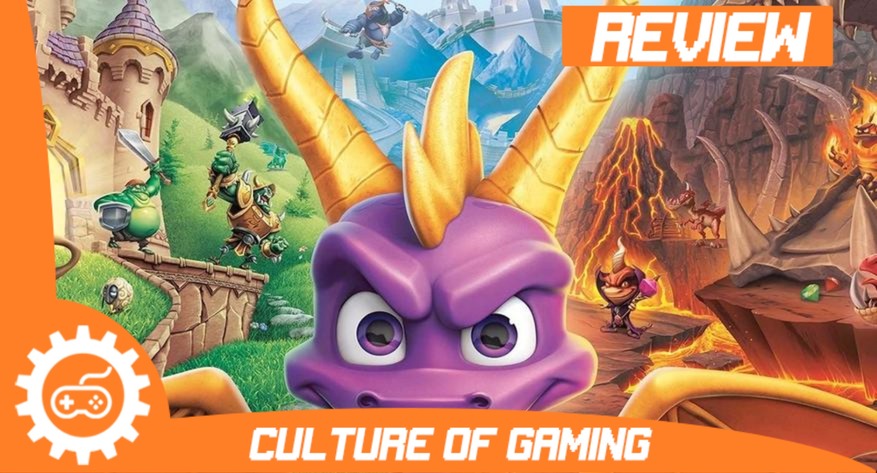 The 90s are back, baby! Following the successful launch of the Crash Bandicoot, N. Sane Trilogy, Activision has decided once again to revive one of the PlayStation’s defining faces. Toys for Bob, known for bringing Spyro back into the Spotlight with the Skylanders series, has attempted to introduce the classic Spyro games to a new generation. The question, as it was for Crash Bandicoot, was whether the passage of time has been kind to Spyro.

The most apparent change when looking at the Spyro Reignited Trilogy is the complete overhaul of the visuals. Long gone are the blocky, polygonal worlds of the PS1. This is how you remember Spyro looking. Each game in the trilogy is downright beautiful, full of life and color. It truly looks like a high-budget cartoon has made it’s way to your PlayStation 4 (or Xbox One).

While the visuals have received a massive overhaul, Toys for Bob has remained faithful to the games that started it all. Returning players should have no issues jumping back into this revamp. Everything is just how Insomniac originally had designed, giving each game in the trilogy a sense of comfort. That’s not to understate just how beautiful all three games are. From gorgeous horizons to white, puffy clouds, you’ll feel transported into the Realm of Dragons (and the Forgotten Realms, and Valar).

The same goes for the characters that inhabit these worlds. Spyro is expressive and headstrong (backed by the ever-iconic Tom Kenny), and the allies (and enemies) that surround him feel like they’re straight out of a Disney cartoon. The characters and performances are both nostalgic and modern. They have a timeless feel to them that ensures that this collection will have a long life ahead of it.

While it doesn’t relate to the visuals, I’d be remiss to not mention the musical score. Stewart Copeland’s score is lovingly recreated, again adding to the timeless factor. However, should you feel especially nostalgic, you do have the option to listen to the original score.

…The More They Stay the Same

What makes the Spyro Reignited Trilogy work is its faithfulness to the original games on all fronts. Toys for Bob didn’t stray from the path with these games, and frankly, they didn’t need to. I had no trouble slipping into the familiar shoes (er, wings) once I got settled in the world. It’s a testament to Insomniac Games how well these levels translate to modern gaming.

Adult players both new and old should have no trouble breezing through the three games. At their score, the Spyro games are made for children after all, so don’t look for any great challenge (not that you would anyway, I’m sure). However, beating the games and fully completing them are two different things. Each game in the trilogy is packed with hidden secrets for you to discover. You could lose hours trying to find every last gem, dragon, or egg in each level.

That’s one of the aspects of the 90s that hasn’t necessarily aged well. 3D platformers of that era quickly became defined by “collect-a-thons,” and Spyro can fall into that trap at times. There’s just so much to collect between the three games, that it can become a bit of slog to get them all.

Despite that, though, the Spyro games don’t force you to go out of your way to collect anything and everything. Like I said, seeing the game from beginning to end isn’t a daunting task in itself, though younger ones may take longer due to the sheer amount of things happening around them. It’s impressive just how well the level design works in 2018.

An Evolution of Sorts

I think my favorite part of playing through the Reignited Trilogy was seeing the evolution of Insomniac’s set of games. The first Spyro the Dragon is very much setting the foundation for what would follow. The gameplay loop is simple and doesn’t offer much in the way of extra challenges, but finding all of the dragons throughout the world was engaging in itself.

Ripto’s Rage and Year of the Dragon took that basic formula, and expanded upon it greatly. Not only in the gameplay mechanics, but the world building too. New locales and new faces are introduced, and there’s more for you to do than simply looking for dragons. As opposed to the relatively solitary world of Spyro the Dragon, the second two games are filled with both friendly and passive faces.

None of these games are bad in any way. However, games are inherently an iterative medium. Spyro the Dragon is what lays the groundwork for the franchise, and with that foundation in place, the subsequent games take it and run with it.

A Tale as Old as Time

The Spyro Reignited Trilogy is as great for adults as it is for children. Adults will have their nostalgic urges satisfied and will sink hours into all of the secrets tucked into this collection. Children will fall in love with the colorful world and the wild cast of characters that inhabit it.

Toys for Bob takes the core Spyro series and brings it right into 2018. These games have never played better, have never looked better, have never sounded better than they do now. Spyro is a beloved icon for children of the 90s, and now he’s back for a new generation. Skylanders may have brought him back into the spotlight, but the original Spyro has returned.

In some respects, the Spyro games haven’t aged completely well, but those instances are few and far between. The Spyro Reignited Trilogy shows that great gameplay can make or break a game. With the love and care put into this collection, hopefully, it’s the start of a new life for the little purple dragon.

The Spyro Reignited Trilogy is an attempt to bring one of PlayStation’s defining mascots back into the spotlight. With a design that is both nostalgic and modern, Toys for Bob has lovingly recreated the games that first put Insomniac on the map.