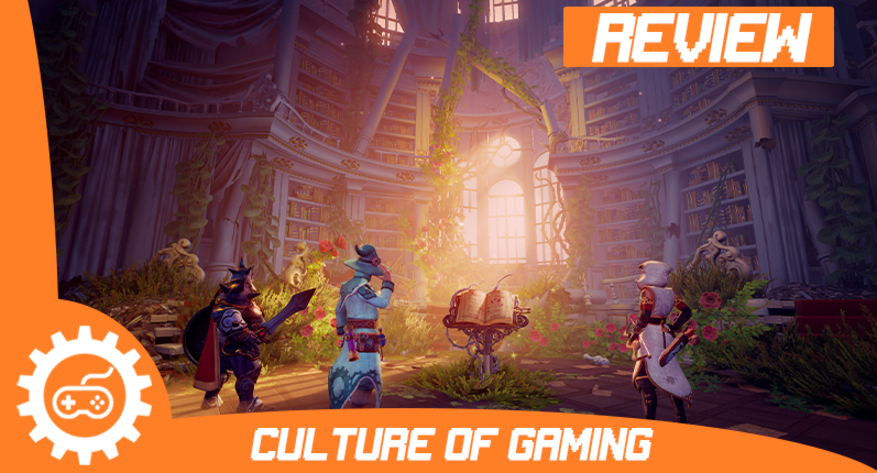 Trine 4: The Nightmare Prince has a legacy to uphold as the fourth game in its franchise. Its diehard fans enjoyed the surprise hit that was the original, and they were there for the elevation of Trine 2 and the series’ misstep into the third dimension with Trine 3: The Artifacts of Power. The Nightmare Prince returns the series to its 2.5D roots that made it popular among its fans.

Published by Modus Games, the game’s developers at Frozenbyte wanted to make sure they showcased Trine in its purest form. They succeeded. Newcomers jumping right into Trine 4 will understand why the series is such a hit, and the game’s simplistic story and detailed tutorial will make sure they never feel lost. However, while I did enjoy Trine 4: The Nightmare Prince, a few small quirks may yet keep the series from becoming legendary.

Dream Of Being a Hero — Story and Characters

The plot of Trine 4: The Nightmare Prince centers on the three heroes of the first three games. Amadeus the Wizard, Pontius the Knight, and Zoya the Thief reunite once again to retrieve the lost and forlorn Prince Selius. The prince has run away from the Astral Academy after tampering with dark magic. The closer the heroes get to him, the greater the number of nightmares they’ll encounter in the real world. The trio must contend with not only the nightmares of the land’s many inhabitants, but their own nightmares as well.

The characters all have defined personalities. Pontius is a dutiful, yet naive knight with an affinity for pie. Amadeus is a nervous wizard of good conscience. Zoya is a thief with a heart (and love) of gold. Finally, Selius is a prince who chooses to run away rather than deal with his problems.

Trine 4 is a return to form for the series, and its story and characters remind you of something out of a quick Dungeons & Dragons campaign. However, this also means that the characters can feel rather two-dimensional at times.

Despite the fact that you get to explore the heroes’ nightmares, you never actually learn anything new about them. Fans of the series may say the characters are supposed to be “well-defined archetypes”, whereas others may come to resent the lack of depth that the characters provide. As I played, I wished Trine 4 had shown more nuance in the characters and story provided.

Using Your Head — Your Abilities and the Puzzles

Say what you will about the story, but Trine 4 truly shines as side-scrolling puzzle-platformer. The majority of the game has you use the unique abilities of the three heroes to solve environmental physics-based puzzles. Amadeus can levitate objects and conjure different 3D shapes out of thin air (mainly boxes). These objects can be used to help him reach new heights or even weigh down switches.

He is not alone in the adventure, however. Zoya can use her bow to shoot special arrows and attach ropes to objects. Doing so allows her to climb up obstacles, swing from hooks, and even trapeze walk across obstacles.

Pontius also has unique abilities. He can ground pound with a devastating stomp, dash across gaps or into boulders, and can reflect water or light using his shield. Most puzzles in the game require the player to put all three characters’ abilities together to make it to the end of each level. For example, Pontius may reach new heights by ground pounding a side of a seesaw that has Amadeus’ conjured box on the other. This sends the box up, landing back on the seesaw, sending Pontius up instead.

The puzzles are enjoyable and varied. I thought I had seen every puzzle type the game had to offer until I came to switches that only activate if Zoya shoots a fire arrow into it. The puzzles continued to change from there.

As the party’s only sword user, Pontius will be most players’ first choice in combat. Though, one could argue combat is not Trine 4’s focus, the simplicity of the game’s story continues with the enemies you fight. Enemy encounters are relegated to closed off arenas where you can typically get away with whacking the baddies with your sword until they’re gone. Amadeus and Zoya are not completely useless in fights, however. Amadeus can slam his levitated items down on foes, and Zoya can freeze enemies with ice arrows and burn them with fire arrows.

The simplicity of combat is not only in the battle arenas. Unfortunately, despite the fact that the game has you fight nightmares, most people apparently dream about the same wolves, bugs, and demons over and over. I understand that creating video games is difficult, especially with a smaller team. I just wish that Frozenbyte had explored more possibilities by making the enemies were more varied and inspired with “dream logic”. Dreams create limitless possibilities for creatures and enemies, at this aspect was under-utilized.

Living In A Dream World – The Levels

Regrettably, the same can also be said about the Trine 4‘s untapped potential for level design. One of the best levels in the game, early on, takes place inside the prince’s dream. It offers some of the most unique mirror and portal puzzles in the game. Once again, with dream logic, anything could have been a location or puzzle mechanic. Frozenbyte chose to play it safe and stick with more traditional puzzle mechanics like light reflecting and switch pressing.

Frozenbyte loves to mention how beautiful the locations look. I’m inclined to agree. One minute you’re by a glistening lake, the next you’re inside a treehouse or a moonlit forest. The problem lies in the fact that the levels are too long. This leaves it difficult for the player to keep interest for an entire level.

That’s not to say the levels or puzzles are bad. As I previously stated, I enjoyed both very much. But when each level goes on for twenty or so puzzles, it can all start to feel the same. Despite unique puzzles and beautiful locations, long levels can fatigue the player.

Honestly, fixing my issue with keeping interest for an entire level would have been as easy as segmenting the puzzles more. Instead of seventeen long levels, I wouldn’t have minded forty shorter levels.

Step Lively, Lads! — The Pacing and Leveling Up

Another issue in the pacing includes the way you level up in the game. In Trine 4, the trio gains abilities as they level up through combat and can “buy” bonuses to these buffs with the pink “experience” bottles you find in each level. The game tells you this, but it can feel dishonest, because you don’t actually get the initial abilities as you gain combat experience.

Most of the time, you possess more combat experience than you require, but the game doesn’t unlock the next ability until you reach a specific part of a level. I wouldn’t have minded that the experience is based on progression. I get it. You don’t want early puzzles broken by abilities you get later. I just don’t understand why the game tells you it’s based on combat.

The abilities that the party gains through “combat experience” actually affect what extra abilities you have. It is how Amadeus can conjure a ball instead of a box and how Pontius can dash. Going back into a level, to collect the pink experience bottles you missed, you find that certain older puzzles can be skipped all together with your new abilities.

Once again, when you don’t unlock your abilities when the game says you should, progression feels tedious. That is quite a feat, given the 13 combat experience abilities and 11 purchasable abilities to unlock. Even still, the skill tree feels more daunting than rewarding.

Despite the many small issues I had, none truly stood in the way of having a good time with Trine 4: The Nightmare Prince. If you are a fan of the Trine series, you’ve probably already bought this game and enjoyed it even more than Trine 2. Nothing said here will change that. Yes, the story and characters are simple, and skill progression feels slow. However, controlling the characters’ many abilities, taking in the sights, and even playing with friends in the multiplayer mode feels joyous. It all balances out to create a pleasurable experience — it just played it a little too safe.

If you’re new to Trine, there’s no harm in finding out why the series is so beloved among its fans. If you thought Trine 2 was just ok, Trine 4: The Nightmare Prince won’t change your mind. But, if you already love the Trine series, what are you waiting for?

Trine 4: The Nightmare Prince was released on October 8, 2019 and is available on PS4, Xbox One, Switch, and PC. If you want more reviews from me and the rest of the awesome people here at Culture of Gaming, you can find more at OpenCritic.com!

THE BAD
Characters are two-dimensional archetypes with little depth
Enemies are uninspired
Long levels make progression feel slow
Not unlocking new abilities when the game says you should, artificially slows down progress
After Trine 3, Trine 4 feels like it played it safe

Trine 4: The Nightmare Prince is a return to what Trine fans love about the series. The unique puzzles are set in beautiful locales, and the characters are really fun to use. What ultimately holds it back is the feeling that the team at Frozenbyte played it safe after Trine 3. Due to long levels and slow progression, it can at times feel as though the game drags. While I wish there had more to the game, you can do much worse than to pick up Trine 4: The Nightmare Prince.