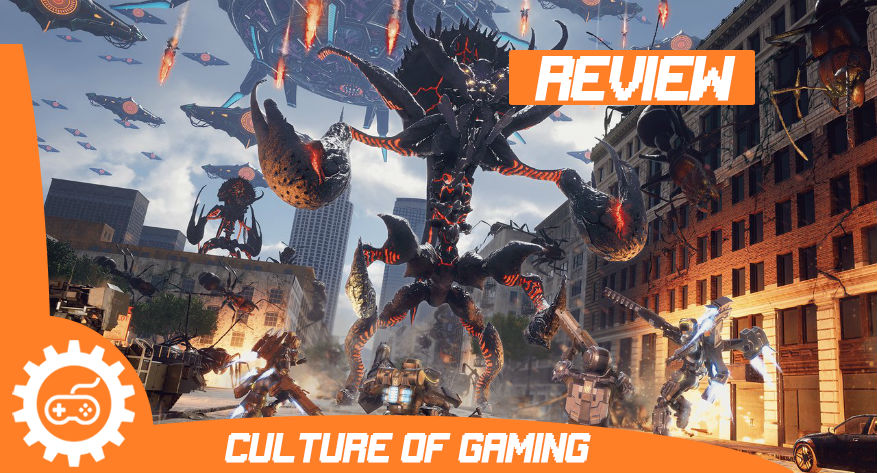 There are few games that scratch an itch like ones that involve destroying as many enemies on screen as you can with your overpowered weaponry. You may be forgiven for not being familiar with Earth Defense Force, as the series advertises itself to a mainly Japanese market. But as time goes on, more and more people in the west get to enjoy this brilliant series. The fifth mainline installment became available for westerners as recently as December 2018. And now, just four months later, comes a new installment for fans and newcomers alike: Earth Defense Force: Iron Rain, developed by Yuke’s.

Fighting Aliens And Looking Good Doing It: Customizing Your Soldier Class and Appearance

As in most Earth Defense Force games, you play as a soldier trying to stop the oncoming alien invasion. Where Iron Rain differs is that, for the first time in the series, you can create what your character looks like. You are not locked in, however. You can change anything at any time, and you will need the ability to customize your soldier if you are going to survive each of the 52 missions.

Not only do you customize the way your character looks, but you choose what gear they take into each mission. You only start with two classes of soldier: the trooper, which focuses on ground maneuverability, and the jet lifter, which focuses on mobility in the air. There are more you eventually unlock, but a lot of the fun is in seeing what you unlock next.

And while it is fun flying around the different stages as a jet lifter, all of the classes suffer a bit when getting ganged up on by enemies. It can, at times, be difficult getting out of hairy situations. Running out of stamina often means that once you get knocked down, you will get knocked down again right after getting up. But as fun as the classes are, fans of this series will tell you, it’s all about the weapons.

Welcome To Earth: Weapons and the Creatures You Use Them On

Before every mission of Iron Rain, you must prepare what two weapons you will bring. Whether they be assault rifles, rocket launchers, laser guns, or even missile launchers, each weapon has its drawbacks as well as its advantages. These include reload time, ammo capacity, accuracy, and especially firepower. There is not one weapon to overpower everything with. For example, the first missile launcher I unlocked had over 1,000 in firepower, but you only get one shot before having to reload, and it literally takes thirty seconds to lock on. Strategy plays a much bigger role than in previous entries.

And there are more than a couple different types of alien that want to mob, stomp on, or shoot laser beams at you. They include giant ants, spiders, scorpions, robots, and even a gigantic spaceship with legs or two called gargants that release all these monstrosities upon you. While the graphics of Earth Defense Force games are usually not the focus, as to keep the ability to show dozens of creatures at one time, the slowdown I did experience never got to be such a problem where it affected how I felt about the game.

So, This Is Where My Earth Defense Force Paycheck Went: In-Game Currency

As you take down thousands of these creatures, they drop different colored gems, depending on the enemy type. In order to unlock more HP and most of your weapons or clothing for your character, you need money and gems. It eventually can get to be frustrating when you don’t have enough gems or currency to unlock the latest rocket launcher in the shop, but it adds a certain value to what you do unlock.

Things get more complicated when other humans get introduced as an enemy type. They are from a rival faction and want all the gems for themselves. This means you must learn to become quick about collecting them.

Much like how there are trade offs with whatever weapons you choose, emergency items work the same way. With money being so important to your power growing as a soldier, you may wish to think twice about healing. If you heal, the cost of your “green feeder” gets taken out of what you earned for completing the mission. The game judges player performance as well. Using health packs lowers your ranking for the mission.

Hard Work Paying Off: The Challenge

As challenging as all of this sounds, (and make no mistake it is) Yuke’s never forgets that it is an Earth Defense Force game. Iron Rain is fun, but prepare to lose your missions a lot too. And while doing the same mission over again can be tedious, it’s that much more satisfying when you can, at last, take those aliens down.

Iron Rain also has something that many other reviews of this game may not mention. It involves something that I particularly loved about the customization of this game. And it didn’t involve which weapons and defense I had. It was the fact that this game even lets you change the button configuration. After many deaths in an early mission, it all clicked for me once I changed my configuration. I still failed missions afterwards, of course, but it feels like Yuke’s just wants you to have a blast. From choosing how the game controls to what weapons and class to use. You can even choose whether you want to play alone or with a friend.

And that is really what it all comes down to. You may make nitpicks that previous entries did this or that differently or that the graphics aren’t perfect. Heck, you could even choose to focus on how insurmountable everything can feel at times. But Earth Defense Force: Iron Rain is just a joy to play. Sure, there are things to become annoyed about. I had too good of a time to put much stock in it. And if you let yourself have fun with EDF, you will.

The game is available for Playstation 4. For more Culture of Gaming reviews tune into OpenCritic.com.

THE GOOD
More Earth Defense Force after just five months.
Highly customizable.
With certain soldier class types, even moving is enjoyable.
Blowing away thousands of aliens is a blast.
Even though Yuke’s claims ‘serious story’, don’t worry. The cheese is still present.

THE BAD
Long load times.
Can get repetitive, especially during challenging missions.
Can often feel like you’re getting ganged up on.
A.I. teammates aren’t always the most helpful.

Earth Defense Force: Iron Rain continues the EDF tradition and lets you have fun blasting away thousands of alien monsters. Everyone might have their nitpicks, like repetition stemming from failing missions, but Yuke’s did just enough to advance the series. I hope that they have another chance with the franchise in the future.