Gamescom And Carry On?: A Panel With Games NI 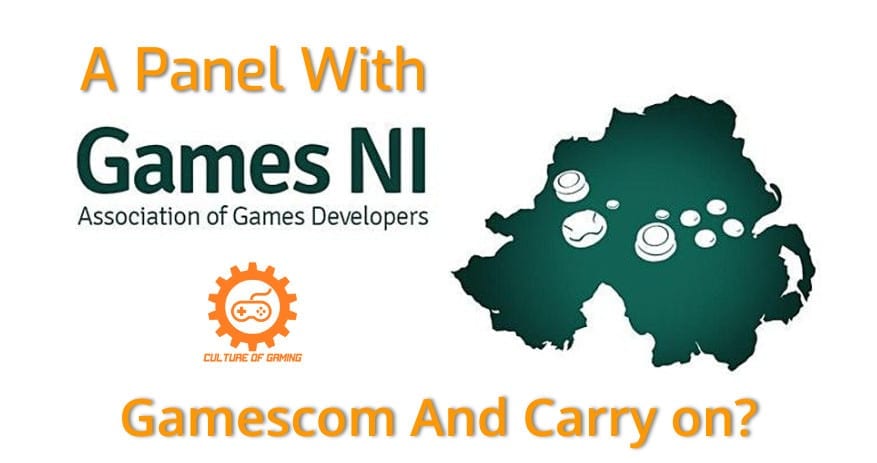 Despite the recent madness of Covid-19 and the cancellation of nearly every public event on the planet right now. We thankfully still had the opportunity to attend a panel with the fantastic, Games NI. This is the official developer’s association for Northern Ireland that contains the best and brightest individuals in the gaming industry from the emerald isle.

During this panel the topic of discussion was whether games conferences, such as GDC, PAX, E3 or Gamescom, are viable and worthwhile in today’s gaming landscape. So we thought we would give you all some insight into how industry professionals are feeling about conferences. Whether they are dead in the water or if they are still as useful to businesses as ever before.

The debate started with a question surrounding conferences being the only viable way to build relationships with developers, publishers and journalists. This was predictably met with some conflicting viewpoints.

Some of the panellists were in defence of conferences stating that they are highly effective. This is due to the fact that it’s the most densely populated area of like minded individuals that you will encounter in your career. Everyone is aiming to get something out of the event, such as striking deals, making business relationships that they can grow or advertising their product. Companies wouldn’t attend these events and spend the amount of money that entails to simply show their face.

The pro-conference members of the panel also suggested that developers and publishers use this as a deadline to plan their whole year. It can be a useful tool to motivate staff and to keep track of progress. Having a clear finish line can often make you move faster towards it.

Then lastly, they suggested that these conferences are essential for indie developers. Without the slots on offer to these developers at these events. Plus the general exposure they can get through networking and advertising their product. These developers won’t have the opportunity for growth on the same scale that they would with conferences. Online, it can be nearly impossible for little development teams to make more noise than the triple A releases. So this physical arena in which to expose themselves to the world is ideal for them.

The sheer magnitude of these events can be staggering. Meaning it’s almost impossible for the little guys to stand out.

When speaking against the idea of conferences, the panel suggested that the best relationships that you can gain in the business are forged through a working partnership. They are forged through marketing, email and social media networking. They suggested that the only way to grow a relationship is to get your foot in the door. The panel members also supplement this with the view that all meetings with industry members at conferences are fleeting, that many developers will stick close to those that they know. Also, many relationships you make will not carry over to the next morning.

They also indicated that the whole process for those companies that are successful in drumming up a good number of relationships can be overwhelming. This is especially prevalent when referring to smaller developers and publishers. If they are successful and gain a large amount of work to get through this can cause a great deal of stress on the work they are already carrying out. Meaning that it may suffer and the product that they are trying to build fails due to reaching for more than they can handle.

Worth Splashing The Cash?

The panel was then asked if the conference is worth the price of admission. Companies can spend thousands simply to get themselves to the conference floor. This can be due to flights, hotels and other expenses. Meaning that it’s a massive consideration when looking at the event as a viable way to gain business.

When talking against the idea of attending, the panel suggested that indie developers often bet their whole projects success on a conference. Meaning that if they aren’t successful it can mean missed deadlines, no exposure, a deficit in their budget and ultimately, a failed project. This is even more relevant when thinking of the recent cancellations and their impact on small developers that cannot host their own versions of State of Play or Nintendo directs. Therefore they suggested that the safer option is often social media promotions and other mediums of advertising.

When defending the price of conferences, the panel suggests that it can often be worth attending despite the price tag. Teams are often able to find their place in the market at these conferences. Also being able to access the competition as a whole allows these teams to find their USP or niche.

They also suggest that aside from GDC, which is an excessively costly event, most events are rather cost effective to attend if done correctly. Not to mention that a number of events offered different tiers based on access and the nature of the teams that are attending. For example, an indie developer will pay significantly less for admission than a big name publisher.

Then finally the panel was faced with the another idea. This being that not going to these conferences makes you irrelevant in the industry. Those in agreement suggested that it is more cost effective to not attend these events. Stating that you can still grow the company from base. This is relevant to both small and big name companies. Big companies are able to put out their own press releases. With which they are under no pressure as it isn’t live and is on their own timeline. So they can decide when they push their statements out.

As for the smaller companies, general harassing through emails and cold calling still works from afar. Plus costs significantly less than attending a conference. Plus it negates the aforementioned reliance on this conference to be a springboard to success.

Then when defending the idea that absence means irrelevance. The panel suggested that although the bigger name companies will not suffer, the smaller companies will. This is partly down to the fact that they are not able to network at the conferences. Plus if the bigger companies are not in attendance or if the conferences doesn’t happen at all. It therefore means they will not have unique opportunities to fill waste slots from big publishers for example. Often these companies book too much stage time, sometimes pulling projects set to be shown to a later date. Meaning small names get their time in the spotlight. This is an occurrence exclusive to conferences. So this alone can be enough to launch a small company to unprecedented heights.

Overall, the majority of the crowd in attendance was in agreement that conferences as they are currently offer a worthwhile experience. However some of the points raised showcased the potential changing tides.

Thank you to everyone at Games NI for the invite to the event and the stellar conversation on offer. If you want to find out more about what they do, feel free to check out their website here.

What are your views on conferences as they are? Do you feel that they are a necessary evil? Do you feel that they are a fantastic opportunity for businesses and fans alike? Or are you in the camp that believe that conferences are as good as dead? Leave a comment telling us what you think. Also, if you’re a fan of our content why not check out our views on if E3 is dying? Or if something more chill is what your looking for then check out our top ten underrated games of this generation. I’m Callum and thanks for reading COG!

Take a look at the full range of Performance Lab Products Here: https://www.performancelab.com/?a_aid=5c5a258eeba5c&a_bid=a2ad38c1