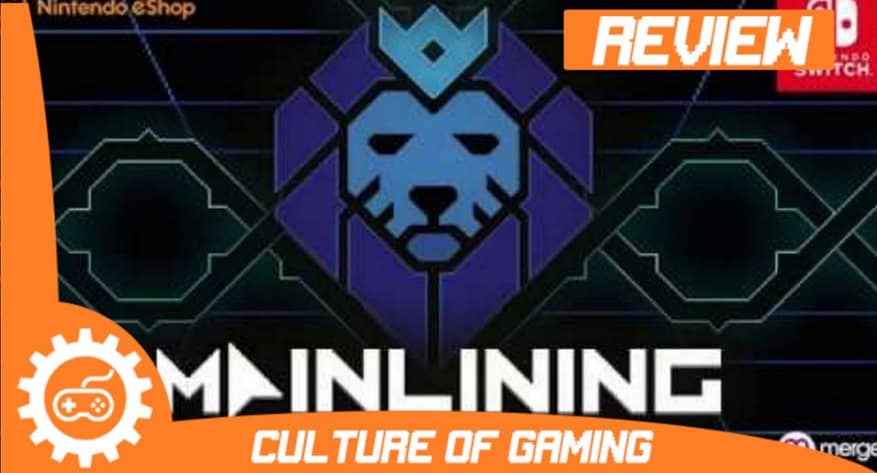 Mainlining is a point and click adventure developed by Rebelephant and published by Merge Games. In the game you take on the role of an MI7 agent who’s tasked with solving various cyber crimes. It combines witty story telling with mechanics that mimic hacking. It came out on June 20th, 2019 and will run you $14.99 USD.

The stories that make up Mainlining are as well-written as they can be dark. Sure, some stories are about simply finding a drug dealer. But other stories will have you hunting down notorious serial killers. Despite this, it manages to have dark, dry humor that lands when its supposed to.

The game presents the story in a way that keeps you interested, and doesn’t drag out. The cases are one off, allowing you to pick up and play whenever you want. That’s one aspect of the game that managed to translate well to the Nintendo Switch. The stories also manage to retain a unique flair when compared to each other, and even when up against other point and click adventures. Although the difficulty of the puzzles could allow for a reviewer to call Mainling the “Dark Souls of Point and click adventures”, this reviewer is not such a person.

Unfortunately the story is bogged down by poor gameplay. Some mechanics don’t work the way they’re supposed to, making completing the tasks presented to you an absolute chore. Which is something that cannot be present in a good game. Hopefully with some patched in polishing, some of these issues are rectified.

The mechanics and gameplay are where this game lacks. The keyboard is split in two, and you use one thumbstick for each side, and use one trigger for each side to click. It’s a pain to use. It feels completely unnatural and simultaneously clutters your screen more. Which, when you have to have a half dozen pages open at once, adds up to a poor experience. Even touch screen usage fails to help.

That’s not where it stops though. There are mechanics in the game that don’t work right either. From enter keys failing to work so web pages refuse to load, to your computer help function only working roughly fifty percent of the time. Everything comes together to create an absolutely unsatisfying battle towards trying to make the game do what it tells you it should be able to do.

Even the “hint” system is a failure, regularly giving out false information. This mechanic is done through a chat with your fellow agents, who often offer advice. Unfortunately they’re often wrong and instead you have to go through a lot of trial and error to figure out what you’re supposed to do instead.

The art is a plus. Mainlining uses a retro bit style that mimics the classic Windows OS. It really creates an atmosphere that feels like you’re a hacker. Or would rather if you had a keyboard instead. Regardless, experiencing such a well made copycat with very pleasing art was the best part of this game.

The audio was designed with the same ideas in mind. To mimic an actual computer OS. While there isn’t much in the way of constant audio that draws you in and keeps you interested, it does what it’s supposed to while enhancing the experience. At the end of the day that’s all you need from the audio.

Mainlining offers little but a frustrating experience on the Nintendo Switch. It’s all too clear how the PC version would be superior in every single regard, while also costing five dollars less there. From broken mechanics, poor keyboard functionality, and no indication of what you’re supposed to be doing, Mainlining is a game that I wouldn’t recommend to anyone. If the idea does at all intrigue you, look into the original PC version. It’s likely that even a basic laptop could run the game, and with the amount of typing needed and window jumping required, a keyboard and mouse are practically a must for a decent experience.

Interested in reading some more reviews? Just head on over to Open Critic for all you can stomach!

Mainlining is a poor port for the Nintendo Switch. It has too many flaws to ignore, many of which actively hinder the experience.