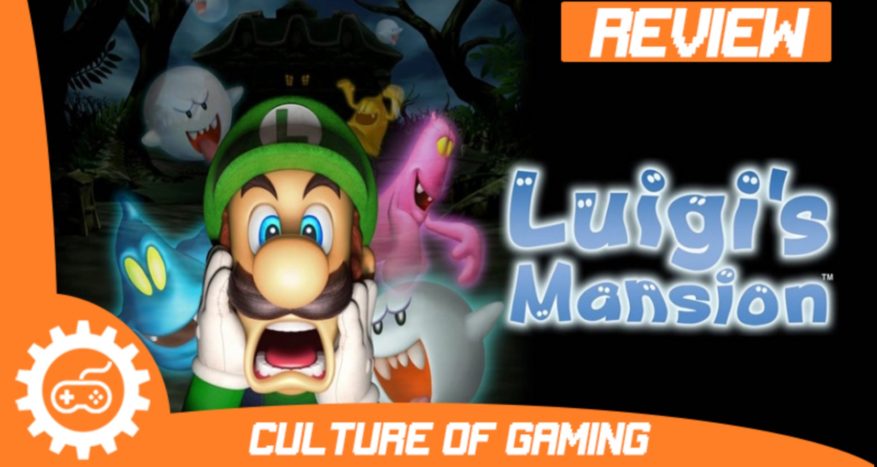 Luigi’s Mansion holds many of my fondest memories from gaming on the Nintendo Gamecube. So, once Nintendo officially announced Luigi’s Mansion 3 for the Nintendo Switch, I was compelled to revisit the original game. It’s where my love for Super Mario’s underdog first took root. The game was developed and published by Nintendo, that originally released on September 14th, 2001.

The game starts off with a rather confused Luigi. He finds out that he just won a mansion from a contest. Yay! Except, he didn’t enter any contests to have won. He tells his brother Mario of the mansion, and they agree to check it out together. But, when Luigi gets there, no Mario is to be found. Instead, he is attacked by a ghost and is saved by Professor E. Gadd. From here on out, you’re in the drivers seat as Luigi. You explore the mysterious mansion with the help of Professor E. Gadd’s “Poltergeist 3000”, which allows you to suck up the ghosts once you’re attacked. You search not only for the secrets the mansion holds but for once in Luigi’s life, he is allowed to save Mario.

For a game released in 2001, Luigi’s Mansion isn’t nearly as dated as you’d believe. The general cartoon design of the Super Mario franchise is part of the games ability to outshine games from the same period. This allows it to avoid the blocky shaping and lack of details that a lot of other games suffer from. This also let Nintendo replicate the style of art seen on the box art, near perfectly. Although it can look rather blurry on many current TVs, it still looks better than most.

This comes from its rather simple settings. There’s never a lot going on. The majority of the mansion is just background and serves no other purpose. The only pieces that are actually meant to move, are Luigi, Ghosts, doors, and furniture really. The only issue with this is that characters seem almost out of place in the mansion, as their styles don’t quite match up.

That isn’t necessarily a negative. For the most part, the mansion is dark, dull, and rather boring. It is primarily different shades of brown. This artistic choice allows Luigi and the colourful ghosts he encounters, to really pop and give life to the game.

Overall, the game manages to outlive being called dated graphically. While it doesn’t match up to recent Super Mario games, it isn’t in such a state that playing it is difficult to do.

There are times when this is sort of true though. Luigi’s Mansion’s cutscenes are kind of difficult. The character movements are awkward. Both in how they move and the pace at which they move.

Not only that, but many times the game takes us outside of the Mansion for cutscenes during different boss battles, and the clips leading up to the fights aren’t very good. Typically the background is just black with occasional lightning strike while the boss throws a tantrum.

Overall, the game is designed well, even when looking back on it nearing the two-decade point after its original release.

Luigi’s Mansion utilizes level design very well. The game uses near Metroidvania styled layouts. You have to complete certain bosses before accessing a new area, but you can’t complete every boss the first time you visit said area. The game not only requires you to return to previous areas to continue forward, but it also makes you backtrack to reacquire certain power-ups.  The entirety of the game is built around backtracking. A feature that’s a staple of metroidvanias. While the game isn’t a full-fledged take on the genre, it certainly takes inspiration from it. Which is a great way to diversify this from your main entries in the Super Mario franchise.

The game also does a good job of making the game spooky while maintaining the Super Mario feel. From the general lack of lighting, and the jump scares given by ghosts, the game will keep you on your toes. While it isn’t “scary” it certainly will give you some spooky vibes.

The usage of “Boos” as a collectible also helps keep the game fresh and allow for revisiting. You need to catch so many Boos in order to advance at different points in the game, and if you catch them all, you get a better ending.

The gameplay is also rather unique. Rather than just fighting enemies, you have to manage to spook them, typically with your flashlight, before managing to suck them up. Enemies have health gauges that show when spooked, and the longer you suck, the less their health becomes. The tricky part comes from how you’re vulnerable to anything else in the room, even when sucking. From other ghosts to hazards caused by the ghost you’re struggling with.

Bosses add more factors. From faster and stronger attacks to harder ways to spook them. The game also features extra, optional bosses, that can give you an edge, and lead to a better ending. The final boss is also rather difficult. While I managed to defeat this time around, when I was a child I definitely struggled for a long time.

However, the gameplay isn’t always very fun. While it can often times be challenging, it also suffers from repetition. The basic enemies you fight, never really change. You spend the majority of the game fighting three types of ghosts, with two or three different one’s appearing occasionally. The bosses are also sometimes hit or miss. Some like the Boos boss fight is really fun, really challenging, and adds extra factors to the fight. Other’s are pretty lame. Easier than some of the basic ghosts even.

The game is rather short. For a casual play through it will only take you around six hours to complete the game. That includes probable death or failure and catching the needed Boos. A completion play through, would still only be around eight hours max. This is for defeating every extra boss and catching all of the Boos.

The downside isn’t the game’s overall length. Although let’s hope Luigi’s Mansion 3 is a little longer the previous two entries. The downside is that the game sometimes drags on. A lot. This is caused mainly by repetitive gameplay, but also as a result of long periods of time that can occur due to lack of direction. This is the games biggest flaw. It isn’t very long, and the time you do spend on it isn’t always very fun. A six-hour game, shouldn’t feel like its fifteen hours.

The music in the game is great. It really showcases the atmosphere of the game very well. While you’re creeping around the house, it manages to keep you on your toes, and changes depending on the level of danger that Luigi finds himself in. The best part though is that Luigi hums the song himself to help calm his nerves. I found myself humming alongside him more times than I can count.

It did get stuck in my head. Which was slightly annoying. This was due to a lack of variety. The majority of the game is just the one song. Over, and over, and over again. It really took away from the game and added to the dragging feeling you often get from the game. Instead of adding layers of depth, it strips them away.

The dialogue isn’t the best. It’s often times cring even.  While translation often times isn’t the best, I don’t think this is the cause of the game’s issues. It was written with children in mind, and not so much adults. A form of media, any media, excels when it can be universally enjoyed and appreciated by all ages. Even if every age group isn’t quite getting the enjoyment for the same issues. The dialogue is just poor. It’s choppy, creepy, and just not very fitting. Fortunately, the dialogue is very rare. It almost exclusively occurs between Luigi and Professor E. Gadd, and only at the end of chapters, or for occasional check-ups.

The writing isn’t inherently detrimental to one’s enjoyment of the game. While you won’t be getting much out of what the game has to offer in terms of writing, it serves its purpose. The overall narrative is good. Mario gets in trouble, Luigi has to stop being a coward and save Mario, surprise bad guys, etc. The dialogue is meant to advance this fun plot. Which it does, it does it well. Even with sub-par quality.

The game is rather average. While it shined in the early 2000s, the game doesn’t hold up well. Luigi’s Mansion isn’t as good as you remember. And that’s okay. The game is turning eighteen this year, its expected for it to have aged. And it definitely did age, not very well in most places. But it maintained its charm. It’s a fun, cute, spooky little game. It doesn’t take much time,  to complete. You’ll enjoy the game most likely. Just don’t go in expecting a riveting experience.

If you’re interested in reading some more reviews make sure to check out Open Critic!

Luigi’s Mansionis a decent game. It lacks in it’s overall writing and quality of substance and ultimately lacks an engaging and thoroughly fun experience, but has a charm and challenge unique enough to pull you through the end.