DC’s Year of the Villain #1 Review 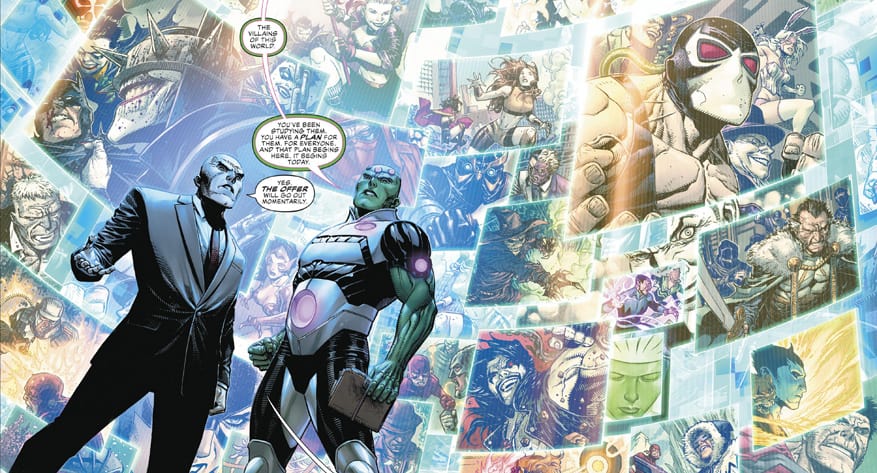 What would Bane do if he had all the troops and all the weapons he would ever need at his disposal? If Black Manta could upgrade his armoured battle suit with alien technology would he use it to kill Aquaman?

Those questions and many others might be answered in DC’s new event: Year of the Villain. Unlike Marvel’s current War of the Realms which nobody on Earth cares about except the people who work at 135 W. 50th Street in New York City and many of them don’t even give two flips of Captain America’s shield about the characters or the comics they work on, Year of the Villain has the potential to provide for some very fascinating twists and turns in the DC Universe.

The first issue, a special available for just the measly sum of 25 cents, sets-up a story arc which will continue each month in its own series and also branch off with tie-ins in DC’s regular monthly comics.

How this event differs from some others in the past is that you don’t need to purchase all of the tie-ins to make sense of the overall story. The tie-ins will be self-contained stories that enhance the main Year of the Villain event but are not necessary to follow along or to keep track of the main plot. That is sure to soften the stress on everyone’s wallets. The decision to present the event in this way really underscores DC’s new approach which is quality over quantity unlike Marvel who continues to throw everything and anything against the wall hoping something sticks.

So what’s Year of the Villain all about? One name: Lex Luthor. The self-proclaimed smartest man in the world has had a revelation of sorts. What could be more important than killing Superman or taking over the world? Helping out his fellow arch-villains.

I mentioned this comic is 25 cents, right?

With Brainiac’s help, Luthor has decided to use his filthy rich fortune to make an offer to every arch-villain out there. He will give them everything they need to end their enemies once and for all if they accept his help.

The rest of the issue delves into some other DC storylines such as Batgirl and Green Arrow finding a terrified Merlyn packing his bags and fleeing because of someone of something called Leviathan. There are detours into the current happenings of the Justice League and Batman as well.

Written by Scott Snyder with art by Jim Cheung the first chapter in the Year of the Villain presents some intriguing scenarios if DC is really willing to go all out and make the dreams of their villains come true. Because for Year of the Villain to work the event has to have a serious and massive impact and it has to temporarily change the current mainstream DC Universe, such as forcing Batman underground in his own city so he has limited resources or maybe The Flash having to do the bidding of Godspeed because of a brain bomb in Iris West’s head. Things like that. If the villains finally have the upper hand in various ways that would be something new and different.

As good as Scott Snyder is he sometimes becomes too reflective and when that happens all the action can come to a grinding halt as we become lost in sub-plots and too much introspection. It is the one of the main reasons I took Justice League off my pull-list even though he brought back the Legion of Doom, which was cool. Let’s hope that doesn’t become the case with Year of the Villain. Keep it short, concise and tight, please.

It is far too early to tell where Year of the Villain could be heading but at least its starting point is interesting enough to draw any reader in for a peak at the second issue.

Did I mention this comic is 25 cents?

THE GOOD
Luthor’s scheme is interesting.
Cheung’s art is fantastic.
Did I mention it is only 25 cents?
Has the potential to be a world breaker across the DC Universe.

THE BAD
The first chapter could have been a little longer.

Year of the Villain is already starting out on solid footing and has me cheering for the bad guys. The fact that you don’t need the tie-ins will spark much joy and celebration in the comic book community who have been soaked over and over again.