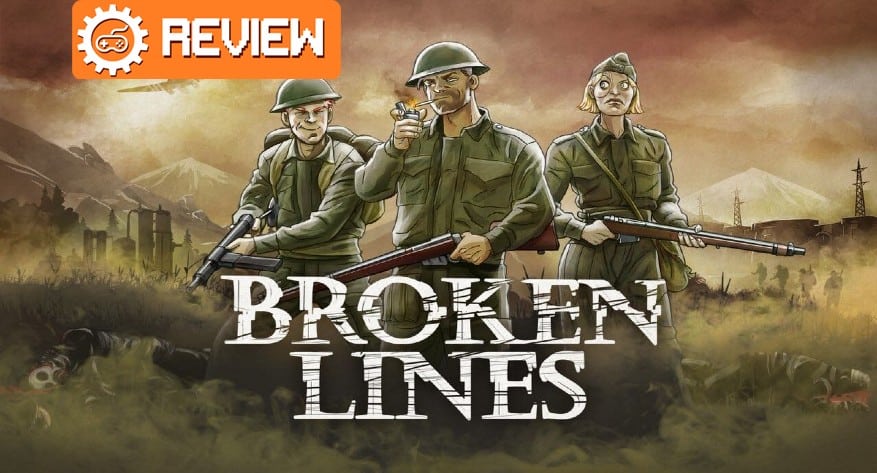 The Lines aren’t the only thing that’s broken:

There are a few phrases I’ve found myself repeating throughout the eighth generation. “So they’re remaking that game now?” or “So they’re rebooting that franchise now?” or the slightly less used but similarly relevant: “When will we get another good World War 2 game?” While the former seems neverending, I was hoping to find an answer for the latter in Broken Lines … Unfortunately, this tactical RPG isn’t about to save us from the WW2 game drought. Though it tries to throw out some interesting ideas, poor controls, half baked designs, and poor performance keep the game from ever being truly exciting. Couple these issues with technical difficulties on the games switch port, and Broken Lines becomes a hard sell for gamers looking for some WW2 action.

Coming from developer PortalPlay, Broken Lines is a tactical RPG, in the vein of XCOM, that takes an alternate history look at WW2. The game starts like most war stories, your plane is downed in an unknown country, and your squad is trapped behind enemy lines. The game takes a twist when we see enemy soldiers have swapped out their swastikas and are doing their best Helghast impressions and filling the air with some sort of toxic gas that is slowly filling the air around the country. To its credit, Broken Lines takes a unique phycological look at the theatre of war. Focusing on themes such as shellshock and PTSD, Broken lines tries to convey the increasingly strained and difficult relations between its squad.

The story also has a nice layer of intrigue with a late-game twist that I appreciated even if I didn’t feel it was all that well delivered. The narrative’s biggest problem is the delivery, the game tries to tackle some interesting themes, but it lacks subtly. The narrative is framed by an unknown narrator who’s overly dramatic proclamations at the start of every mission give away any intrigue the late game reveals might have otherwise had. Similarly, your squad of mismatched stereotypes is all the same brand of unlikeable and forgettable. While it’s perhaps by design that the characters are difficult and irritable, the writers fail to make any of them compelling, meaning I rarely cared as they struggled, and possibly died with the games permadeath mechanic.

There are no compelling arches to follow or compelling relationships between the squad; they all hate each other, and there really aren’t any who stand out as particularly memorable. This is best exemplified in optional dialogue sections where sometimes the squad will continue to clash with each other and become more strained. Most times they lose moral, essentially punishing the player for trying to engage with the game’s characters. I do appreciate the games’ consistent sense of struggle with the squad’s constant infighting and lacking supplies, really getting the desperation of their situation.

At one point, when my squad was completely out of supplies and splintered, I awoke to find one squadmate (I won’t name names … it was King) had up and abandoned us, choosing to go on a bloody solo rampage. The game has some solid ideas, and the idea of the team slowly losing their sanity to the horror’s of war is a compelling one, but the way Broken Lines delivers makes out most of the intrigue it sets up for itself.

Similar sentiments ring true for the gameplay. Once Broken Lines gets going, it offers up a lot of choice in how you tackle its missions, with the squads usually being divided on how to proceed through the warzone you get multiple options on how to tackle each mission. Unfortunately, the tactics you use on these varied missions will often be the same. Broken Lines tactical RPG gameplay could best be likened to games like XCOM and Fire Emblem, though it trades turn-based for a pause/play mechanic.

The tactics used throughout most missions are usually the same flanking maneuver.

While the game’s controls are fairly clunky on the switch, I feel the developers have done the best they can with what they’ve gone, tactical and RTS games being impossible to work on consoles. You control four/five-man squads planning your actions, using abilities, and evaluating the situation before hitting play and seeing the action play out. In terms of RTS mechanics, Broken Lines is fairly basic. You have your shotgun troops for close range, assault for suppression, and snipers for picking off enemies. The game’s mechanics are easy to get the hang of and baring the games sketchy AI; it all works as it should. But Broken Lines does nothing throughout to evolve its gameplay beyond its most basic form.

Missions over Broken Lines six or seven-hour campaign (closer to nine or ten if you include the multiple redos due to hard crashes) never really evolve beyond what you experience in the first hour. The game incorporates a form of a staggering mechanic, the more suppressive fire laid on enemies/allies, the more vulnerable they are. The games closest comparison gameplay-wise would actually be Brothers in Arms; most encounters play out relatively the same, lay on fire them rush the enemy from the flank.

It’s fun the first few times, but without the immediacy of the games mentioned above fps gunplay, it quickly gets boring. The game works best when it throws multiple objectives and options for engagement at the player, the missions where I had to split up my team and use some deduction skills to turn the odds in my favorite were the highlights. Though the kinds of instances are unfortunately few and far between. Most pre-mission I’d pick the same squad set up, only alternating troops to rest up injured ones; you end up using the same three abilities and dynamic from the first mission to the last.

A shame because there are a lot of interesting mechanics in Broken Lines, like how when troops are overwhelmed, they abandon post and go AWOL. But there were times when the game would put my soldiers in unavoidable positions, causing them to go AWOL without much control on my end. I liked that the player gains perks from campfire conversations, even though you’ll likely only ever use three or four of them. The game has multiple endings, and it leaves each path with enough variety for repeat playthroughs if you like the gameplay enough to take a second ride through. The game also adopts some semi-roguelike elements that throw interesting spanners in the works between missions.

The Ugly Side of Combat:

In terms of gameplay and story, Broken Lines has a lot of great ideas that feel decently executed, but the game is really let down in the graphics and performance. Both technically and artistically, Broken Lines is an ugly game. The games character designs and art feel cheap and uninspired; character portraits look downright ugly at times. The game doesn’t fair better in performance, where the muddy in-game graphics stutter and frame drops are frequent. The game also suffers from frequent glitches and performance issues.

During my time with the game, it hard crashed on me four times, causing me to lose entire missions of progress. On the final mission, one of my snipers decided to get stuck in a wall. Leaving me one man down even when I tried to reload a checkpoint. Another glitch caused the bodies of defeated enemies to reanimate to the point of death. Meaning whenever a section reloaded the eerie thump of about twenty soldiers reassuming their position on the floor rang out across the battlefield.

Broken Lines is a game filled with great ideas. But with poor execution, weak performance, and forgettable characters, the game loses a lot of its composure around the midpoint. Once you’ve found your groove, the game rarely forces you to change up your tactics. Most of the later missions feel more like leisurely strolls through the country than tooth and nail battles for survival. The game’s story touches on some interesting themes, and the focus on soldier’s degrading psyches is one I’d love to see built upon in the future. Unfortunately, lots of the intrigue is lost with weak characters and clumsy delivery. Broken Lines at least shows that there is still a lot to be seen in the ww2 genre, but it isn’t the game that’s going to satisfy that wartime itch.

Try it out on steam.

Broken Lines throws out some novel ideas but the overall package is let down by poor performance and repetitive missions. With better execution, Broken Lines could have offered something new but it’s hard to recommend slogging through its alternate history battlefields.