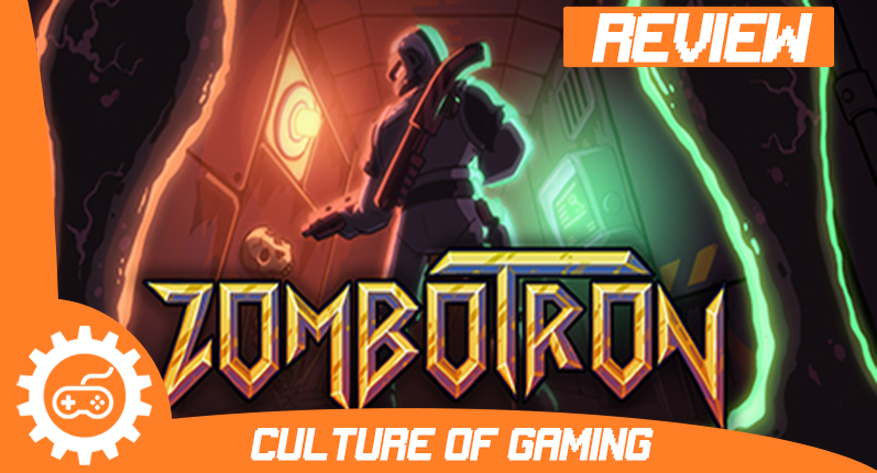 Think of the most video game-like situation you can think of off the top of your head. Do you think of challenging enemies, aliens, zombies, guns, and explosions? Then there is a chance I think you will like Zombotron. Zombotron is a game that has hit Steam, but originally it started out as a Flash game series. Developer Ant.Karlov has a 14 year history of making Flash games for sites like Armor Games, Newgrounds, and Kongregate, and this version of Zombotron is his first premium game. If you want, you can try out the first game in the series HERE. It plays very similarly to the Steam game, so it might be a good test to see if you might be interested.

Enough talking about past games though; this is a review for the current game. In Zombotron you play as Blaze Rush, a mercenary who has followed a distress beacon to a planet infested with aliens and zombies. Let me say, my first half hour or so with this game was rough. It might be because I am not necessarily a PC gamer, but I had a really tough time in the beginning of the game dealing with the controls and continuously kept dying in the same spot.

Once I finally got a good grip on them and learned how the environment acts with the enemies, though, I was sold. Having the control to aim wherever I wanted, whenever I wanted felt great and it was the kind of aiming I always wanted in a game like Cuphead. Unfortunately, after the first 45 minutes or so, Zombotron loses any charm it gives at the beginning.

For a game made by one person, Zombotron looks great, and it runs super smooth. At times, I think it looks like a moving comic book and it is an aesthetic that I am 100% down for. Blaze looks like a prototypical action movie star and the enemies look great in the beginning, but you quickly get tired of continuously seeing the same models attack you. The alien planet you are on looks very pretty in the beginning of the game with its many varying colors, but I found the design quickly go downhill. Too long of time spent in the same rooms where I would die continuously made me hate the linear paths that required so much repetitive gameplay. When that gameplay is combined with a so-so engine that sees you get stuck on the smallest of debris, it slowly eats away at your sanity.

Zombotron plays a lot like a Flash game even with its jump to Steam. Both movement and aiming is simple. I never quite understood the damage rollout in the game. One moment I would be shooting a zombie in the head and it would take an entire clip to kill him. The next, I would shoot one pistol shot from a greater distance at the same enemy type in the leg and take him out with one hit. None of it seemed consistent regardless of the weapon I was using.

Zombotron has random loot drops from enemies, and even the store areas that provide one gun and ammo at a time are randomized. What I thought was fine at the beginning quickly became aggravating. I would kill an enemy, pick up their mask and equip it because it was easily better than what I had at the time. However, Zombotron is made up of very long levels and checkpoints are very few and far between. If you die before making it to the next room or checkpoint, you lose whatever you picked up since the last checkpoint and your next run through you probably are not getting the same item to drop. Going from having an item I felt confident about to having it taken away and replaced by basic gear or sometimes nothing at all felt terrible and took away a lot of enjoyment from me.

Easily the worst part of this game is the boss fights. I always felt severely under-powered against every boss. This isn’t like a Dark Souls boss where you can just find a strategy and eventually beat them. They have too much health, and you always put out too little damage. Even when you hit a checkpoint in front of the boss, you have three lives to kill him otherwise you lose any progress you had on them.

When you die, you drop EVERYTHING you were holding. For example, when fighting the first boss and spawning back in, the boss and his minions corner you in a small tunnel and your only way to fight back is your fist and you have no more extra armor. I hated this so much. I would have to jump over the boss that takes hardly any damage from me shooting him in the head with a full clip of an assault rifle, just so I can have a chance to pick up my armor and shotgun (spoiler alert, that does no damage to him as well). Oh by the way, while you are trying to pick up the items you dropped, regular zombies are constantly spawning in and the boss is throwing little minions on the ground that quickly build up in number.

The bosses are never interesting or fun. They are merely an example of wasted time and I absolutely loathed dealing with them. Honestly, you take the bosses out of the game and the repetitive gameplay at least makes the overall experience manageable.

I noted how the environment plays a part in dealing with your enemies. If an enemy walks under a platform, you can shoot it down to crush them, killing them instantly. There will also be gas tanks spread throughout the world. These are deceptively dangerous to you. Being too close to an explosion you cause not only hurts you, but leaves a burn effect on Blaze that will take out a good chunk of his health. Enemies that come from off screen are nice hints to secrets which is another nice little perk of the environment that comes in handy. It leads to a little exploring at least in this otherwise very linear game, but it is at least something.

In my time playing Zombotron I experienced some really high ups, but also very annoying downs. I really love the aesthetic this game is going for and I think the gameplay is really fun once you give it time and become acclimated to it. The first run through the spaceship is really fun. I enjoyed getting more comfortable with the weapons I had and progressing through the rooms filled with a combination of aliens and zombies was a blast. Once I hit that first boss though, I instantly stopped having fun with the game and it honestly went downhill from there. The experience with the bosses really soured any goodwill I had towards this game. Without them, it’s not bad. I just cannot overlook how aggravating the experience with them is.

Zombotron is a game that caught me on its first impression, but quickly lost me on its repetitive gameplay and some of the worst feeling boss fights.