What Does Apex Season 5 Have to Offer? 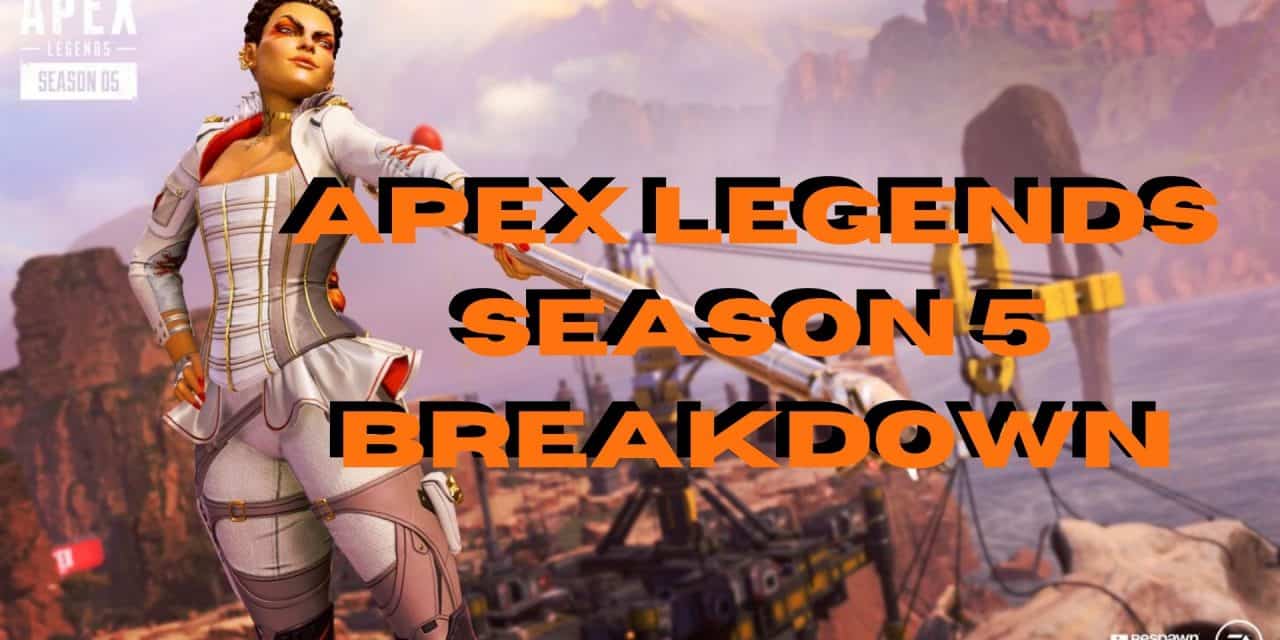 This is our official break down of what Apex Legends Season 5 has to offer. From Legends to weapons to map changes, Season 5 is full of exciting new changes.

Season 5 introduced us to a brand-new legend, Loba the “high society thief.” Her story is tightly wound with Revenant’s. When she was young, Revenant killed her family on his quest for revenge against Hammond Robotics. Now on her own path of revenge, Loba worked hard to become the infamous thief she’s known to be throughout the Outlands. She uses the skills she’s obtained to hunt down the man who killed her family. Landing her in the Apex Games.

The new legend also comes with new abilities. Loba’s passive ability allows her to see nearby epic and legendary loot through walls. The range of this ability is the same as her ultimate, the “Black Market Boutique.”

“Burglar’s Best Friend,” Loba’s tactical ability allows her to teleport in any direction by detaching her bracelet and tossing it. The ability is incredibly useful when charging enemies, escaping fire-fights, and getting to hard-to-reach locations.

Black Market Boutique, her ultimate ability, Loba is able to place a device that will teleport nearby loot to it. Opening it will allow her and her squadmates to take two items each for their inventory. It will also allow enemy Legends to access two items as well.

Of all the Legend updates in Season 5, Mirage has been reworked the most.

Mirage’s tactical, “Psyche Out” allows you to have full control of your decoy. When the decoy is under control, it will mimic the original Mirage’s movement. The decoys last 60 seconds and releasing a new decoy will remove the other one.

Mirage’s ultimate, “Life of the Party,” now deploys a full team of decoys that will copy the original Mirage’s movement. The cooldown for the ultimate is 60 seconds.

Finally, Mirage’s passive ability, “Now You See Me…” now includes a cloaking component when using the respawn beacon or when reviving a squadmate. When reviving the squadmate, they will also be cloaked.

In the official EA Season 5 Patch Notes announcement, they say “The hope for this rework is that it gives more depth to Mirage gameplay by giving Mirage players avenues to get better at Bamboozling people.”

Loba’s addition and previous buffs to Gibraltar have made Lifeline nearly obsolete. Loba’s ultimate ability, Black Market Boutique, teleports items to a selected location. Loot found in Lifeline’s Care Package doesn’t compare to the loot pulled by Loba’s. With an Ultimate Accelerant in hand, Loba’s ability to give her squadmates high-tier loot is undefeated.

The only changes made to Lifeline in Season 5 (so far) are an increased bin ratio and removing the knockdown shields from the Secret Compartment loot pool.

Gibraltar and Pathfinder were both nerfed in this patch. For Gibraltar, developers said that internal data shows the Legend is “in a good place” for one on one fights. However, in squad fights, he’s too over-powered. Because of this, they reduced his Dome Shield duration from 18 seconds to 12 seconds.

Pathfinder’s cooldown for his Grappling Hook was increased from 15 seconds to 35 seconds.

New Legend updates also include room for more patches. Throughout EA’s announcement, designer notes seem to imply that there is more in store for Legends who only had minor reworks.

Octane’s launch pad’s cooldown is only 60 seconds, but developers say they have more planned for the Legend. This first patch means a “push for more team utility,” but players can expect to see more in future patches.

Caustic’s rework makes it so friendly gas no longer slows squadmates and traps are no longer triggered from the other side of the door. However, this rework came with a developer note. Changes to Caustic are “a bit of an experiment” EA says. “We will be keeping an eye out to make sure this change doesn’t cause any degenerate player behavior.”

When Loba arrived in the Apex Games, she caused Skull Town and Thunderdome to collapse. Now, all that remains is “Salvage,” the new POI. A rig has been placed along the coast that connects to the former Relay and Wetlands. The Wetlands was replaced with the “Capacitor,” which includes an underground tunnel to Singh Labs.

Players should take the time to explore the changes made to Kings Canyon because, in two weeks, World’s Edge will make a comeback. It appears that the two maps will rotate throughout the season.

Season 5 has introduced a new quest mode to players. All season long players can play the quest “The Broken Ghost,” which follows Loba’s hunt for 9 pieces of a mysterious relic. Each day, players can find “Treasure Packs” in competitive matches. Picking up Treasure Packs allows you to unlock new Quest content, however, you can only pick up one-per-day. Following the quest will offer you rewards.

Be sure to check out Apex Legends developer Rayme Vinson’s blog post on “The Broken Ghost” here.

Other Minor Changes in Season 5

Conversations between Legends appears to be more personal. When communicating with squadmates via Thanks/You’re Welcome’s, Revives, and other in-game dialogue, it is unique for each Legend.

Revenant’s dialogue is always somewhat…harsh. When reviving Loba, you can hear him make comments about her parents. Loba will also comment about her plans to kill Revenant herself. Bangalore can also be heard making comments to Revenant, going as far as calling him a “jackass.”

There are no new weapons in Season 5, but that doesn’t mean the new season has nothing to offer. Developers said they didn’t want to oversaturate the weapon pool by adding new weapons, so they made some other weapon changes. The official EA statement said they needed time to test creative changes because they want weapons to “have real value to the gameplay.” As for now, here are some of what Season 5 has to offer…

Ranked Series 4 now includes “Reconnect.” In Reconnect, players who have left the match “unexpectedly” are able to rejoin the match. Developers say “unexpected” includes “exiting the match through any means other than the system menu, including crashing, using alt+f4 on PC, or ‘dashboarding’ to close the game on console.”

You can read more about what Ranked Series 4 has to offer here.

Developers have introduced charge towers in the Season 5 patch. These devices can be found in Kings Canyon and can give any players standing on the platform a full Ultimate recharge when it releases a blast.

Have you played as Loba? What do you think of her abilities? What changes would you like to see in future patches? Let us know down in the comments or on Twitter @thecognetwork.

For more on Apex Legends, click here or check out our discussion of Skill-based Matchmaking in Battle Royale games.