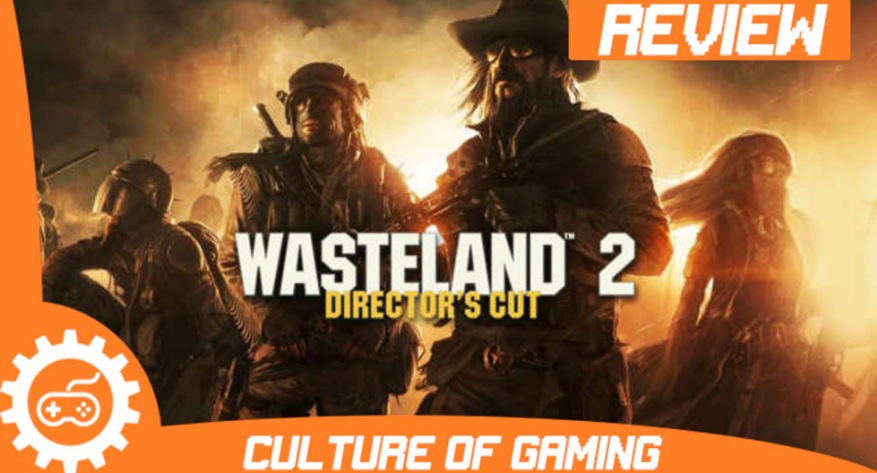 Wasteland 2: Director’s Cut came out for the Nintendo Switch on September 13th, 2018, years after the game’s original release back in 2014. Wasteland 2 was developed and published by InXile Entertainment, with the producer of the original Fallout games as part of the team.

The game clocks in at around eighty hours of content if you feel like doing everything, which is a lot for only $29.99 USD.

Wasteland 2 is set in a post-apocalyptic wasteland. So, in other words it’s right on the mark for what you’d expect from the sequel to Fallout‘s predecessor. It’s a turn-based role-playing game, which for many will be an instant turn off.

For those few who still enjoy this genre, you’re in for a very enjoyable time. Wasteland 2 isn’t without flaws, but the game provides a very comedic, and difficult challenge.

The amount of story Wasteland 2 provides is impressive. Even ignoring the main story completely shows how much it has to offer. The game is full of flavor text. From log books, to item and skill descriptions, the game manages to build the world around it without forcing the information into the game.

The main story starts simple, but complications are soon introduced, as is tradition. It’s set in an alternate future after the Apocalypse was caused by a conflict between the US and Russia back in 1998. The game takes place in 2102, fifteen years after the original.

As the leader of Echo Team One you’re sent by General Vargas to investigate the death of Ace. Upon finding his corpse, it’s discovered that the Synths have returned, the main antagonists of the original game.

Vargas has you continue Ace’s mission to place repeater beacons around the wasteland in order to triangulate a strange signal. As you’re doing so, you encounter a horde of synths.

They were working for a mysterious synthetic being who’s goal is to evolve humans into a new, mechanical being. Pretty creepy, but also a very compelling villain. Unfortunately the way in which the story is given is less than stellar. The game offers almost no direction. Wandering around trying to find out where you’re supposed to next will become the new norm.

Wasteland 2 also struggles with trying to hand you too much at one time. Every mission you receive branches off into multiple different side quests, and the game lacks any real kind of organization for those wanting to focus more on the story. The upside is the story really is interesting. So, pushing through some extra missions for it just makes future combat encounters easier.

The best part of the narrative, is how much your choices matter. Depending on the order of quests you take, decisions you’re left to make, and even how effectively you accomplish your missions, will alter the direction the story takes for you. Not only that, but different forms of survival will be emphasized. On the world map, even the directions you take to get places can mean life or death. Otherwise you might wind up dying in a radiation bubble or dying of dehydration.

The combat system is fairly simple. It’s your typical top down turn based RPG. Every turn you use your Action Points (AP) in order to do various tasks such as moving, attacking, or utilizing skills. Wasteland 2 is in the same vein as X-Com or Mario + Rabbids: Kingdom Battle. While it doesn’t reach the same level of greatness as either of those games, the combat is still engaging.

The biggest flaw of the combat system, is how long the fights can take. Even with a four person party, your shots miss at such an alarming rate. You’ll wind up fighting for almost ten more turns than you should have needed at time. This is even if the enemies are standing directly in front of you, or if they are not even in cover. Instead of focusing on the importance of cover usage, positioning, planning your movements, and fighting depleted AP, the game decides to bring difficulty in the form of just not being able to hurt anything. Oh, and don’t worry, your enemies somehow can still manage to hit you almost every turn, even if you’re still in cover.

This on top of the lack of direction the game offers makes Wasteland 2: Director’s Cut a painful game to get through at times. The combat isn’t good enough to make you want to continue playing, and the game pairs that with you having to wander around aimlessly until you give up. The reason this game has eighty hours of content, is because it does everything in its power to slow you down. Fortunately after a few hours of fine tuning your strategy, the combat goes from being a long struggle, to being a long period of fun.

The Art of the Apocalypse

The in-game art functions well enough, but it’s not anything special. Due to the colorless landscape of the desert a lot of the scenery blends together. But the various settings are distinctive from one another. The character portraits are fitting for the style of game, and the equipment is different enough that different styles of characters can be created depending on what the player wants. As is the case with many games, the loading screens still have top notch art. Their art is often a lot more interesting than the game itself.

The game also struggles with its user interface. Wasteland 2 was created with PC players in mind. Due to this the menus are often complicated, and annoying to navigate on the Switch. Every page is full of walls of text. That’s not all either, the HUD is also cluttered. It really hinders combat, since the many objects on your HUD will block the health bars, positions, and hit chances shown for enemies. Leaving you to try and spin the camera around every which way so you can read the needed information through the cracks.

Audio-wise, Wasteland 2 manages to enhance the apocalyptic atmosphere. With certain themes playing depending on your location, tasks, and physical conditions. It manages to refrain from the musical redundancy that a lot of turn-based RPGs suffer from.

The voice acting is also surprisingly well-done. NPCs are distinctive from each other, and running into the same voice used between multiple characters, even background characters, doesn’t happen. Or at the very least, it isn’t noticeable.

Wasteland 2: Director’s Cut was originally released for the Switch back in September of 2018. When it came out, the largest complaints with the port revolved around performance issues. The game crashed during combat encounters, suffered from random frame rate drops, and random lag.

It’s received some patching since then, which is probably the reason for this delayed review. For the most part these issues have all been resolved. While lag is still sometimes present, the crashing has been fixed completely and the frame rate drops are gone. The performance issues that plagued the game and turned many away initially are resolved, so if you’ve been waiting for these issues to be fixed, now’s your time to pick up Wasteland 2: Director’s Cut.

Wasteland 2: Director’s Cut is an extremely in-depth RPG. It has so much wonderful world building that you can’t help but be enticed despite some issues with the combat system, a general lack of direction, and some messy UI components. The many issues that the game had originally as well have been patched up. So, this port manages to be a worthwhile experience, despite some issues players may have with the game.

Want some more reviews? Just bounce on over to Open Critic!

Wasteland 2: Director’s Cut is a worthy port for the Nintendo Switch. It brings a level of world building rarely seen by even the largest of AAA companies, and pairs it with an enjoyable albeit often annoying combat system and world.