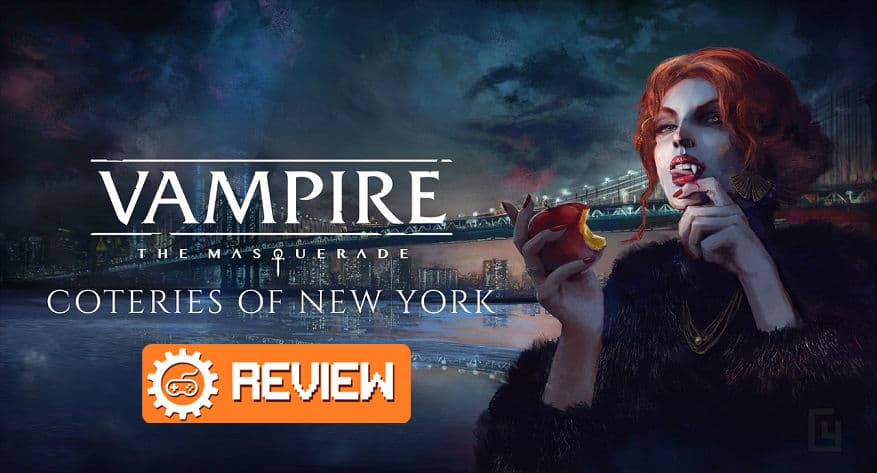 Vampire: The Masquerade – Coteries of New York is a visual novel that takes place in the same universe of the cult classic Vampire: The Masquerade, released in 1991.  I have had no previous experience with the series, but I had heard a lot about it, and I was anxious to jump into this unique, macabre world. I was ready for an engaging narrative, supported by small but effective gameplay mechanics. Did I get what I want? Not quite, but the game certainly got my attention on the series.

A Story of Death

Coteries of New York opens up with a choice of who to play as. Each character you can name, making them your own, but they each belong to a specific clan and have their own backstories. So the intro to the game is completely different based on who you play as. In one story, you begin as a struggling artist, and another, you are a man rearing from a breakup.

Soon enough, though, you are turned into a vampire and thrust into a world of gore, manipulation, and horror. The world here is wonderful, with many of the vampire cliches eliminated or changed in an interesting or unique way. I found it easily overcame my vampire-fatigue from the onslaught of vampire-themed content that started hitting the market about a decade ago.

The plot is compelling and engaging, and the writing is great. The characters are interesting and endearing in their own special, if not sick, ways. The narrative is more grounded than a lot of vampire tales, and it makes the entire concept much more appealing. It makes it grittier and less fantastical, and a great take on the existence of a vampire.

Although the story and writing are great for the majority of the game, things start to go downhill towards the end. Plotlines are left unfinished, and plot twists are abrupt since there is no work done to build up to these monumental moments. The writing takes a significant dip in quality, too. Some of the speeches characters deliver were very confusing or out of character. There began to be more incomplete sentences or sentences riddled with vague pronoun usage, comma errors, etc. I’m not pedantic about grammar, but the errors led to confusion about who was saying or doing certain things.

Since the game is a visual novel, there isn’t a whole lot to discuss regarding gameplay. However, there are two major aspects to this game: Hunger and choices.

Hunger, as you might imagine, is the desire for blood, and the game establishes a central dilemma. If you satiate your hunger and feed on humans too much, you will lose your humanity. Feed too little, and the Beast inside you will take over; you will become a wild animal, feeding and attacking others without abandon. On top of that, the more you use your vampiric powers, the hungrier you will become, which forces you to choose when to use your powers and when to be more restrained.

This is an interesting premise, but it is executed poorly. I would go days without feeding and experience little to no effects. I would not hesitate to use my powers, either, but I never felt any consequences from my feeding habits. All that would happen is that my screen would have blood on the edges. Other than that, there will no discernible impacts from indulging in or abstaining from sucking blood.

The Illusion of Free Will

The primary mechanic of the game is choice. You usually have three dialogue options to choose from in conversation, and the idea is that the plot will change based on your choices. There is even the insinuation that you can fail certain missions or put yourself or others in danger if you do not make the right decisions.

However, it is extremely difficult to fail. I messed up multiple times–I said the wrong thing, hit the wrong person, etc–but there were rarely significant consequences to my actions. Ultimately, it seemed that the plot was determined to reach its natural conclusion without my input. For example, much of the game is concerned with choosing which companions to recruit for your coterie. I chose two individual companions, Hope and D’Angelo, and did not interact with the others.

Despite ignoring two whole characters, this did not change my story at all. I simply did not get to experience the tales of those other characters. The two I did build relationships with are present during one significant moment towards the end of the game, and then they vanish. Their contribution to that moment could have been from anyone, not those specific characters. The majority of my time in the game was spent investing in these individuals, and they didn’t make an impact on the narrative of the game. Sure, they were interesting to talk and interact with, and their individual stories are more engaging than the primary plot, to be sure, but it was disappointing to have all that work be inconsequential in the end. At the end of the day, Coteries of New York’s primary mechanic is severely flawed.

The Pictures and Sounds of a Novel

Since the game is a visual novel, there isn’t much happening except reading and, occasionally, clicking. However, what makes Coteries of New York special is its art style. The character models and environments are wonderfully detailed in images reminiscent of paintings. They are a joy to look at it, and the camera moves slightly for some scenes, mimicking motion. Many of the images aren’t completely still; rain will fall, shadows will briefly journey across walls, etc. This slight motion makes these beautiful still-images come to life.

The only disappointment is that some of the same environments are reused for different areas. There aren’t many environments to begin with, so it’s disappointing to be in a different part of town but see the exact same alley you saw only an hour earlier.

The music is also engaging and flexible, matching the needs of every situation with somber or intense rock, orchestral, and electronic music. These songs will repeat again and again as you read and select your choices, but they never get old. When needed, they fade to the background, functioning as ambient mood-setters. In other cases, the music stands out, accentuates key moments in the plot and makes the game a more intense experience. The score is excellent, providing fantastic music with the flexibility of being at the forefront and the background at different times.

Even the Undead Aren’t Perfect

Sadly, I did have a few instances where the game shattered any immersion it had managed to build with glitches or errors. As mentioned earlier, there were a lot of typos and confusing sentences. One glitch or error I kept encountering repeatedly, however, and it involved the text of the game. When a character is talking, it is shown in the standard font. But when there is narration occurring, or the main character is thinking, the text is italicized. Multiple times, the two fonts would be switched, and a character would say something but in an italicized font, with no specification as to who was speaking.

This wasn’t a huge issue when there were only one or two characters in a scene, but it made some scenarios infinitely more confusing when there were many characters in one place. I would have no idea who was speaking. The alternative was true, as well, meaning that narration would be presented as a character’s dialogue. I was forced to take a minute or two to figure out that the text was actually narration and not a very confusing line of dialogue.

Ultimately, I wouldn’t say I enjoyed my time with Coteries of New York, but I will say it has made me excited for the release of Vampire: The Masquerade – Bloodlines 2. The game does a good job of establishing the fascinating, macabre world of the living dead. I can say I am anxious to explore this world more. The plot was engaging, even if it did fall apart in the end, and I enjoyed the moments I spent with many of the characters.

It is just a shame that Coteries of New York doesn’t function well as a game. The Hunger mechanic falls completely flat, and many of the choices you make don’t have significant consequences. Ultimately, Coteries of New York would be better off being a fantastic book, not a visual novel.

For more reviews and opinions on Vampire: The Masquerade – Coteries of New York, check out Open Critic here.

THE BAD
Hunger Mechanic is Lackluster
Choices Don’t Have any Weight or Significance
The Plot’s Conclusion is a Confusing Mess
More Confusing Sentences, Typos, and Font Use as the Game Progresses
Environment are Recycled for Different Areas of the City

I am an English (Writing Specialization) major at the University of Nevada, Reno, and I also LOVE video games. I've been playing everything I could get my hands on since I was a kid playing my Nintendo GameCube. When I'm not playing the latest titles or replaying Dark Souls for the umpteenth time, I am usually trying to write my novel or write and edit for clients as a freelancer.