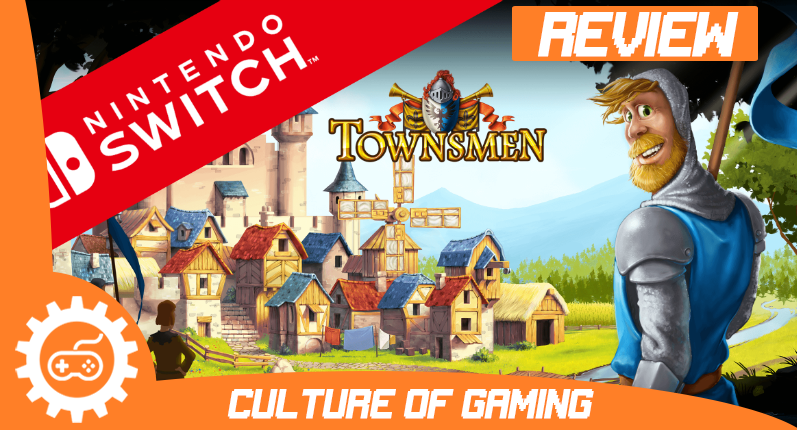 When I was approached to review Townsmen for the Switch, I was sceptical. At first glance, Townsmen looks like a very basic phone game. The graphics do not impress, and from the outside, gameplay looks like the usual city builder that you can find on any mobile store. Surprisingly though, Townsmen has a deep formula here that works well to make you lose track of time. Even with a long and boring beginning, I am genuinely enjoying my time with the game.

Townsmen is a city building game set in medieval times. Very simply, you start with very little and grow your city to produce the resources it needs to thrive. The citizens are called Townies, and they are the life force of your town. Keep them happy enough to stay while bringing in more and your town will grow slowly, but surely. Any townie can do any job for the town, so they are very flexible. Each building has a special job it does to help your community grow. Learning the chain of making buildings work together is part of the fun of this game that the tutorial has a hard time explaining.

Like many other games, Townsmen comes with a tutorial. Unfortunately, the tutorial is very long and fails to teach the player very important tools for city building. It took me almost three hours to complete the tutorial, and I did not learn about important tools like researching and understanding how townies work with each other until I was on my own. The tutorial is seven missions long, and they try to paint a small story here, but it is not great. It is just a means to help motivate the player to get through a very long learning session.

When a player finishes a tutorial, they should feel ready to take on future objectives. I left the tutorial feeling confused about many aspects of the game and not sure about where to go from there. I had no understanding of many buildings and did not even realize that I had a research area that as I level up gave me special benefits. If I had done the tutorial in multiple sittings, I am sure there are tons of things I would have forgotten about and had to relearn on my own. The first three hours of the game I cannot say I particularly enjoyed.

The game does not have a story per se, instead opting to give the player scenarios to complete. I enjoyed my time with these. My first experience with this mode was one that centred around making a successful trade market in your town. This is the players first chance to build their town on their own and where I finally understood what I needed to about the game’s mechanics. Like the tutorial, scenarios take a good chunk of time to complete, but it was here that the light bulb clicked on for me and I understood the game better.

The big thing to know with all modes In this game is that the big difference lies in the scenario that the game gives you. Randomly, NPCs will pop up giving you quests asking you for certain resources in exchange for gold, prestige, or other resources. Regardless of which “mode”, you are playing this is how you progress in a faster way than waiting for townies to gather resources. There is no real end goal beyond that. Just make your town thrive.

While on the path to a thriving town, you will hit plenty of roadblocks where you will be sitting still. I had tons of times where I did not have the right amount of materials, goods, or even buildings for my town to grow. At these points, the player is stuck waiting for their town to both gather the resources and transport them to the right areas. Thankfully there is a way to fast forward time to bypass these many slow moments.

Using that fast forward, of course, brings up a change in seasons faster. While you would think season changes would bring a lot of changes, all I noticed was in winter farmers can’t use their fields, so you need to find food from other areas. Townies in summer complain about being cold and needing clothes as much as when in winter, and there is no difference in resource production aside from fields not growing back. This is an area that feels very shallow. Why even include this if it is not changing up my gameplay?

One element that does make an impact though is disasters. In some scenarios and sandbox maps, if you choose it, bandits can raid your town and set fire to your buildings. You will need to raise an army to combat them and can also take out their base. I played with this very little because the bandits are more of a little nuisance than a problem that needs to be fought head-on.

Natural disasters happen randomly though. Storms prevent traders from coming to your town, and fires can randomly pop up. In one session of a sandbox game, I had just begun building my town and had only four buildings built up by a time that my town randomly combusted. I did not have the resources available to build a fire watch tower, so I lost pretty much everything and quit out of the game.

Have you Played Townsmen yet? What are your thoughts on the game? Let us know in the comments below and stay tuned to Culture of Gaming for more Reviews and news.

Overall, Townsmen is a better experience than it looks at first. The building system is nice and deep, with fun scenarios and many different sandbox areas to find a value for your $19.99 purchase. That said, I would only recommend this if you are a fan of city building games as the beginning to the game might be a big turn off if you are not.