They Are Billions PS4 Review 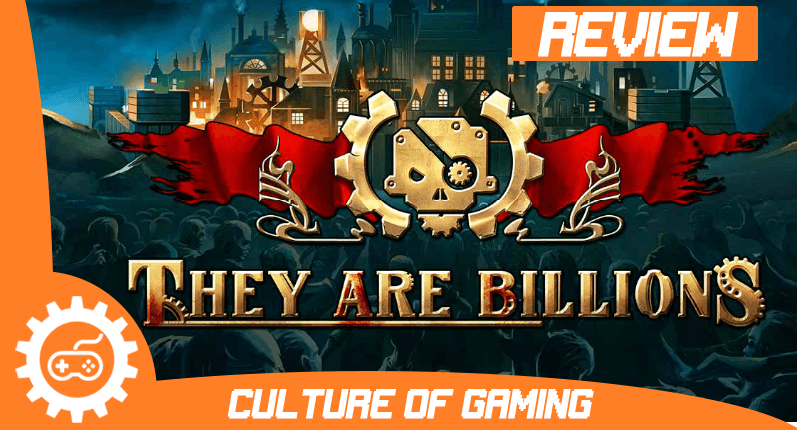 They Are Billions, by Numantian Games, is a steampunk apocalypse RTS game that made its famous debut on Steam. With the help of Blitworks, They Are Billions has been ported to both Xbox One and PS4. This excellent RTS game has managed to do what few games have: creating a fun alternative to war based games.

They Are Billions is an addicting game that runs flawlessly on consoles. However, while all the bells and whistles are in place, as a port it doesn’t work well enough even though they considered how players would play the game and the lack of a campaign diminishes this otherwise amazing game.

They Are Billions is a steampunk RTS game where players have to build their colonies, gather resources, employ troops and set up defenses all while defending against a horde of zombies. This game is similar to other RTS games like Starcraft and Command and Conquer. You build and create different colonies while choosing which upgrade paths to diversify. Positioning is king and not only do you have to build quickly but you also have to manage your resource pipeline. Luckily, They Are Billions prioritizes strategy over dexterity of your mouse clicks, or in this case gamepad inputs, by having a pause option to manage the building of structures, upgrading, and resource management. There are a total of 4 maps that the player can unlock and different difficulties and days to choose from.

Unlocking new maps requires that you attain a score factor of over one-hundred percent. Depending on zombie density and days allotted will affect your overall score after a successful game session. The player can tailor their gameplay experience by setting how difficult the zombie horde will be or the amount of time needed. The game encourages experimentation to understand They Are Billions’ mechanics by allowing players to set easier settings.

They Don’t Have Ports

They Are Billions is a great concept for an RTS game but this port still suffers from its consoles limitations. I had previously review Titan Quest for Xbox One and back then I had summarized that “Titan Quest on consoles is the worst way to play such an amazing game.” While Numantian Games and Blitworks worked hard to deliver the same performance as its PC counterpart. There are too many things that get in the way that I don’t think they considered or simply lacked the resources to account for console play. One being the gamepad control scheme as it is a terrible substitute for a mouse and keyboard. Sometimes the built-in shortcuts don’t respond and quickly as one would hope and frankly its a convoluted mess of inputs that are counter-intuitive.

They Are Billions is an amazing achievement but like Titan Quest, the best experience is still on PC. Let me be clear that the developers did have mouse and keyboard support for the PS4 version. However, for the sake of this review, I choose to play with the gamepad and that experience diminishes the overall game. Pausing helps PS4 players maintain a strong grip on strategy and building an effective defense for a colony but micro-adjustments are a pain. It is difficult to select certain units and perform smaller tasks in the heat of battle. It’s not only the controls that suffer from this port but the overall presentation for playing on a TV.

They Are Billions has to convey a lot of information and the size of the text, resources, and other factors isn’t big enough for playing on a console. The PC version is perfectly suited since most players will be playing on a monitor that is only a couple of inches away from them. They Are Billions on PS4 suffers from the UI because it doesn’t translate well to a living room or bedroom set up. This reminds me of the situation with Diablo 3 in that some aspects work better on consoles, like melee fighters, while others are better on PC, like casters.

Pausing is great for console players who won’t have the same precision and speed as a PC player. The UI, on the other hand, makes it hard to get a firm understanding of everything available to the player. As a person who loves playing the occasional RTS game here and there. These issues matter because not everyone reads gaming sources like Culture Of Gaming. Some players will pick up They Are Billions because it looks like a fun zombie game and this port does little to resolve the same problems that have always affected the genre on consoles. Games like Halo Wars were built with consoles in mind and that game plays like a dream.

While I didn’t expect They Are Billions to remake the game solely for consoles. I had hoped that they had better solutions or tools for a port on consoles. They Are Billions is an addicting and fun new take on the RTS genre but this port simply doesn’t live up to the game’s own reputation.

Personally, there haven’t been that many games that originated on PC that would announce a console port that I would get excited for. I was ecstatic when Diablo 3 came to consoles and other game as well like Hollow Knight, Slay The Spire, and etc. They Are Billions was a game that got a ton of press attention on Steam and I was excited to hear that it would come to PS4 and Xbox One. It had been a while since an RTS game that was noteworthy came to consoles and I wanted to see how that story would unfold. RTS games have always had this problem of trying to achieve the barrier of a gamepad centered control scheme. They Are Billions came to PS4 and Blitworks did an amazing job at making sure the game ran well but the caveat being that it’s just another “console RTS game.”

I highly recommend playing this amazing game but know that this is a lesser product when compared to its PC predecessor. Currently, Survival is the only mode available while the campaign mode will be added at a later date. The game is still engrossing and developing optimal builds and structure placement makes the They Are Billions worthwhile. If you’re going to play on TV, you may want to scoot a bit closer and keep in mind which input shortcuts work best for you. Otherwise, you’ll have to buy a mouse and keyboard if you want the “optimal” experience but don’t buy them solely for this game. They Are Billions by Numantian Games and Blitworks is out now on PS4 and Xbox One. Let us know what you think about adjusting to a controller for this zombie apocalyptic game!

Thanks for reading! Don’t forget to check out my interviews with USC Games Chair Danny Bilson, Shades of Magic author V.E. Schwab, and Black Panther’s Quest voice actor James Mathis III. For more great interviews, reviews, editorials, and news stay tuned to CultureOfGaming.com, or check us out on OpenCritic.com.

THE GOOD
That Steampunk Flair
The Pause Button
Artwork and Buildings
Great Options For Difficulty Adjusments
A Plethora of Zombie Horde Actions!

They Are Billions is an addicting RTS steampunk game that runs flawlessly on consoles. However, while all the bells and whistles are in place. They Are Billions as a port doesn’t control well and the lack of a campaign diminishes this otherwise amazing game.