The Top Ten Treasures of The Humble Trove 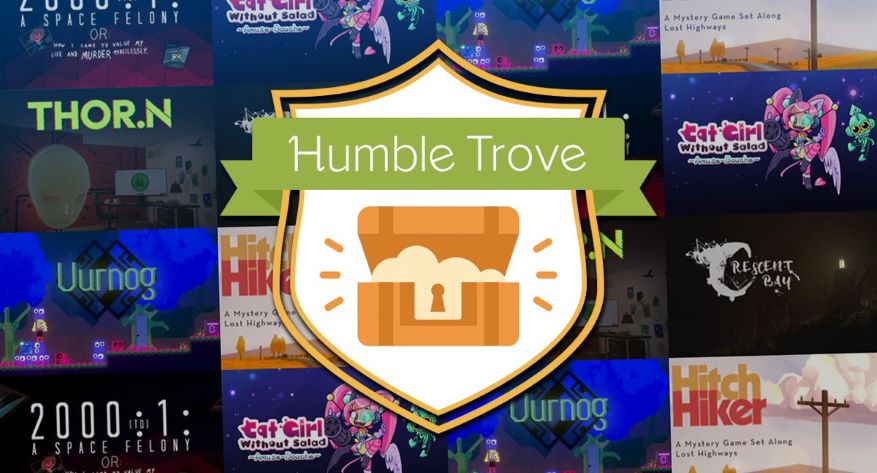 While only recently has a serious challenger to Steam’s retail supremacy emerged, the Epic store is far from the first to offer an alternative. Founded in 2010, Humble Bundle has been serving up games to customers for ages. While most have at least a tertiary awareness of their monthly bundles and charity affiliations, the site offers quite a bit more.

Tucked away at the back of the site is the Humble Trove, offering a mass of DRM free Indie Gems to any that subscribe to their monthly service. They’ve accrued quite the library of titles, so let’s pick out the best of them.

Falling somewhere between the cyberpunk cityscapes of Shadowrun and the turn-based combat of XCOM, Satellite Reign is far more open than either of them. Its vast open world and multiple approaches to missions give a lot of freedom in terms of how you choose to play it. You could arm up your team of four agents and blow through bases better guarded than La Santé Prison, or simply slip one agent through security by themselves.

For those that love the dystopian cyberpunk aesthetic, it’s a damn beautiful game. It also hits almost all the story-beats you’d expect from a cyberpunk title. There’s an evil corporation with complete dominance, some immortality-tech and some old-fashioned guerrilla espionage. A stand out title in the Trove for any who love the genre like I do.

An old-fashioned dungeon crawler in the style of Diablo, Torchlight II is a far simpler take. Its gameplay systems are tighter, it’s loot less sprawling and its enemies are far less intricate. But that all comes together to make it feel like a more complete and satisfying experience. It won’t keep you hooked for hundreds of hours like a Diablo title or Path of Exile, but if you’re looking for a polished and well-crafted experience to scratch that itch without committing to titles as vast as those, Torchlight II is your answer.

Ed McMillen’s first success, Super Meatboy is a 2D platformer packed with short, punchy and challenging levels. It causes a death toll that few other games can compare with, but the pace is such that you’re halfway through your next attempt before you could feel any manner of negative emotions. The entire game follows this rapid pace, with the eponymous lump of flesh flying through levels.

It’s a game that loves everything that inspired it and does little to hide that. It’s retro graphics and Mario inspired narrative perhaps being the most glaring evidence. For those that haven’t tried it already, the Humble Trove offers a great chance to. Just don’t let it piss you off too much.

One of the few games that let you play as an unrepentant villain without all those shades of morally grey, Overlord puts you in command of legions of typical fantasy creatures to reclaim a fallen kingdom. Overlord also has the spine to make you practically useless without them. Your minions fight and die on your behalf and enhancing them is key to your success. They’re also the source of most of the game’s comedic relief as their interactions with the world around you are joyous to witness. It’s humour in general hits all the right notes as well.

Overlord doesn’t have much in the way of narrative, but its clever mission composition and its excellent world building pack it full of enough choices and content to let you make your own way through it, something that fits the conceit of the game perfectly. Its controls and AI can be a struggle, but the game offers you enough to get through it.

Amnesia has long since been left behind in the horror world. Outlast perfected its formula and sailed off to stellar success, while Amnesia’s own sequel was generally seen as a step back. But the original game is still perhaps one of the best attempts at Lovecraftian horror we’ve seen in games. It drops you in with nothing besides a name and leaves you to stumble around a medieval castle trying to figure things out. Things only get worse as you do.

While it might not compare to more modern horror titles mechanically, Dark Descent’s strength is in its atmosphere. It’s less visceral than many survival horror titles, but the entire game just makes you feel filthy. It’s closer to a Silent Hill title than modern survival horror, in all the best ways.

Groundhog Day crossed with Cluedo, The Sexy Brutale is a murder mystery puzzle game that uses time manipulation in some incredibly inventive ways to have you prevent the deaths of those around you. The more curious details about its plot lie waiting towards the end of its narrative and its ending delivers on all of the work you put into getting there.

It uses its environments and characters all in ways to enhance its central puzzle mechanics, shaking up the otherwise straightforward steps to preventing the murders. That, coupled with its charming aesthetics make The Sexy Brutale a niche but excellent experience.

Perhaps less widely recommendable than those that preceded it, Orwell is a game that has you assume the role of a government agent, investigating every facet of people’s online lives to uncover threats to national security. It takes more of a visual-novel esque structure to it’s gameplay. You commandeer the Orwell system as it highlights data and picks out tidbits for you to interpret, as the system itself is utterly ignorant to the nuance of human communication.

Orwell’s choices are limited, restricted to what information you do and don’t flag up as worrying. It’s also a bit shaky on its own rules at times. But ultimately, the game makes for an interesting take on a crime thriller and an excellent experience.

As with their prior title, Fullbright’s Tacoma falls into the ‘walking simulator’ category. Although unlike most, I’ve never considered that to be a bad thing. Tacoma is no exception. You’re tasked with retrieving the AI in command of a space station and experience memories of the crew through a widely used AR system along the way. As with Gone Home these snippets are far more engaging than the game’s central conceit.

The characters featured all seem like incredibly real people, and investigating their story makes the otherwise completely linear narrative feel like a sprawling path. It’s the same kind of short and deeply engaging experience its predecessor was, although unsurprisingly it doesn’t quite compare.

And how could it? Gone Home was an incredible experience for those that leapt into it before the game’s intricacies became well known. It masterfully manipulates cliché horror tropes to generate an atmosphere of dread few actual horror games have ever managed. And it never delivers. Because the little insights you collect along the way were always the purpose behind the experience. I use the word experience almost literally, as it’s another ‘walking simulator’ game with few gameplay elements.

I’d really rather not say anymore about it than that, on the very slim chance there’s someone that hasn’t heard about it yet. But even if you have, or you watched someone else experience it, its still worth revisiting. If you haven’t yet, it too can be found buried in the Humble Trove.

I love Soma. It’s a game comprised of all my favourite things. Horror, pretentious existentialism, nightmarish body transformations, and beautiful underwater visuals. Contrary to expectations, it delivers an all the aspects that comprise it. It’s both visually beautiful at times and visually repugnant at others. Where Frictional Games stumbled with Machine For Pigs, they leapt with Soma.

Again, I don’t want to say too much about narrative elements, as the story is enhanced by your ignorance. But few games have ever explored the fundamental moral quandaries of human consciousness and actually managed to be a good game on top of that.

If you weren’t already signed up for Humble Monthly, you get all of that and a lot more for free in addition to the Monthly Stuff. And as someone that often struggles to find half decent games in Steam’s festering bog of a storefront, having access to a pre-curated bunch of games is ideal. So, take your own dive into the Humble Trove.