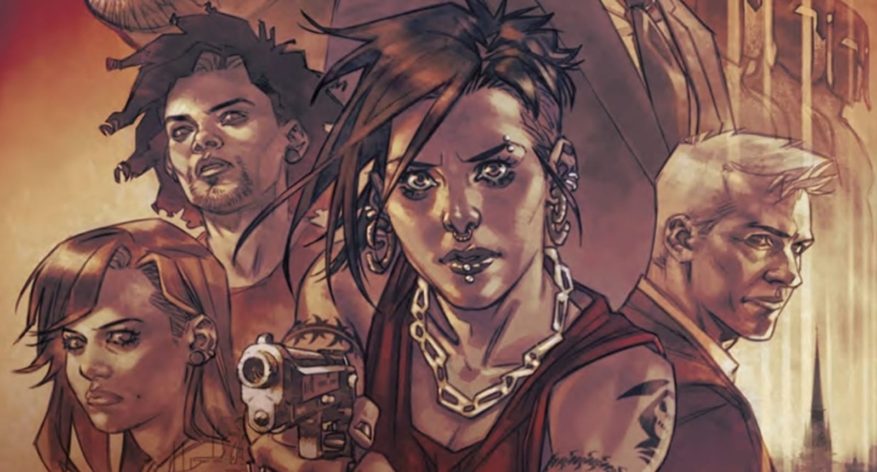 The original set of books were such a huge success that they received multiple film adaptations. Firstly adapted for Swedish cinema and then later by David Fincher for Hollywood audiences. The comic book takes place after the events in the films and the books. And to be honest, I’m quite surprised it’s taken this long for the books to be explored further.

The sequel by Titan Comics sees Lisbeth Salander coming face to face with the seedy hacker group Sparta, amidst a very ugly political climate. All this happening after Salander’s friend Trinity is kidnapped, leading her to seek out Mikael Blomkvist to investigate. On the surface Sparta want to revolutionise, but all is not quite as simple as it seems.

The Events of Issue #3

In issue #3 the stakes of the investigation are being turned up a notch further.

Lisbeth and Mikael find themselves interrogating a hostage whilst trying to escape from an event filled with misogynists. But what intel could they possibly gain from all this?

Meanwhile, Sparta have assembled a team from The Hacker Republic to do their bidding of trying to break into the governments data centre to possess all kinds of sensitive information.

Whilst in the background, the standings of the Republican party are growing with the majority of the Swedish public in the election. With organisations colliding with unsavoury individuals to achieve their goals of existence. Posing many ethical questions in the process.

The story in issue #3 is somewhat routed in reality, with events happening that could very much be “allegedly” happening right now.

A New, But Familiar Story

Sylvain Runberg adding a new story to the Millennium trilogy, bringing it up to date with current global events is a smart choice.

I love that this is a new, but familiar, take on the characters. With a new story created to add to the storyline of the books, instead of just retelling them in a different format. The story and themes explored are very much in line with Steig Larsson’s work and wouldn’t be amiss as a completely separate novel by Larsson himself.

Runberg also gives the story the perfect tone needed for it to be carried in the comic book medium. Falling somewhere in between the gritty, surreal take of the Swedish movies and the more accessible Hollywood films.

Belén Ortega has done some excellent work on this project, especially with putting her own spin on the design of Lisbeth and Mikael Blomkvist. The designs are unique to the comic instead of just being straight copies of the actors in the movies. Ortega has also done well to capture the character responses within their faces, adding extra emotion across the panels.  All this helps to make the events in the comic have weight, substance and consequence behind them.

THE GOOD
Story structure and flow.
Ideas explored are interesting and routed in reality.
Panels and speech balloons compliment the movement of the story.

THE BAD
Can sometimes be hard to follow when in intense dialogue.

If (myString.equals(“the quality of this issue is anything to go by”))
{
System.out.print(“then you should definitely be checking this series out – I know I will.”);
}