The Eyes of Ara for Nintendo Switch Review 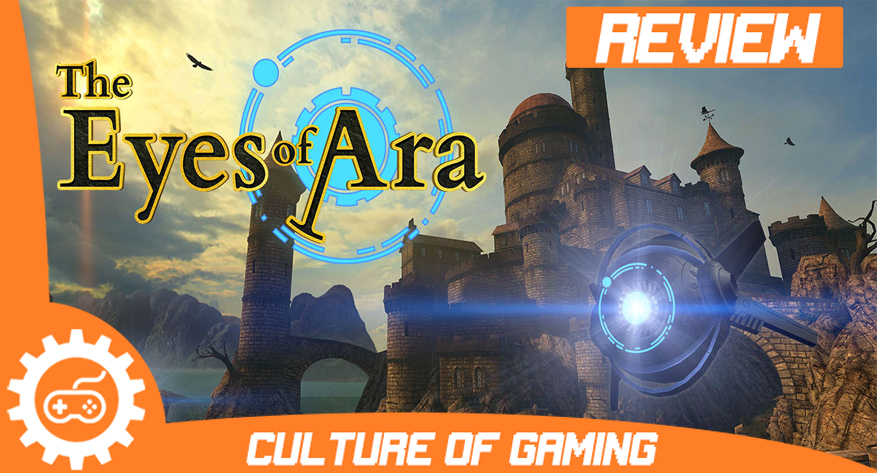 Thanks to 100 Stones Interactive, I was provided with a free copy of The Eyes of Ara for the Nintendo Switch. It’s a point and click adventure game like Myst, and has been out on iOS and PC for some time now. But how does this game hold up on Nintendo‘s very own handheld console? Let’s find out!

Wow! What a Mansion!

The Eyes of Ara starts off with our unnamed and silent protagonist traveling to a mysterious land. As you progress you stumble upon an abandoned mansion/castle and find a way inside. The opening segment sort of acts like a tutorial, even though the game doesn’t guide you at all. The only hints you get are about how to play the game and control your character. Once you make it inside the mansion, you are left to explore and solve its mysteries.

Personally, I have a soft spot for these exploration puzzle games like Myst and The Witness. However, The Eyes of Ara lacked the compelling narrative that the other two games had. I sometimes struggled to find the motivation to continue because I didn’t really seem to have an aim or a goal. The main reason for this is that the game relies on readable notes instead of visual storytelling, which can get confusing if you don’t find all the notes. That being said, the mansion itself was a blast to explore and I was always excited to see what was in the next room.

There’s not much that I can talk about in terms of gameplay since it’s a straightforward puzzle game. But there is one aspect of the game I did find thoroughly annoying, — the touch screen. I understand that this game was originally made for PC and iOS and is designed around that functionality, but it unfortunately didn’t translate well to the Nintendo Switch controls. I tried playing it while holding the console, playing it laying down, playing it on the desk — but it just never felt comfortable to play.

In addition, there’s barely any controller support, and the sensitivity of the touch screen can get a bit too crazy at times. But I can’t blame the game too much since it’s more of a hardware fault. Once you get over the whole touch screen fiasco, the game is genuinely fun to explore with enjoyable puzzles. While I did find some of the puzzles to be pretty easy, there were some that were creative and difficult. So in the end, the gameplay is a mixed bag — the gameplay itself is fun but navigating it is not.

So with exploration games, I expect good visuals and sound design, since those will be the most noticeable aspects of the game. I think visually the game looks pretty good, especially on the Nintendo Switch. The colour and lighting is well-done and really nails that mysterious abandoned vibe.

However, I feel that the sound design could improve just a bit. It’s not bad by any means, I wished they added more music or made it more noticeable. I can’t even recall hearing environmental sounds outside of the times when I touched objects. I do really enjoy “puzzle solved” jingle — it gives the game a Zelda puzzle vibe and I love it. Overall, I didn’t mind the technical design of the game, but I do think there are some obvious improvements that could be made to The Eyes of Ara.

While there are some aspects that I enjoyed, such as the core mechanics of puzzle solving and explorations and the game’s visuals, I do wish there was more emphasis on a coherent story or goal and more noticeable music. And I truly wish I didn’t have to deal with the obnoxious touch controls. I’m going to give this game a shot on my PC or phone, but for now, I’m going to judge my experience on the Nintendo Switch port. If you like games like Myst or The Witness, you might want to give Eyes of Ara a shot, but I suggest playing on a different platform or waiting for the touch pen accessory.

You can buy the game for $14.99 on Steam, the Microsoft Store, the iOS Store, & the Nintendo eShop now.

For more reviews and opinions on The Eyes of Ara, check out Open Critic here.