The Book of Demons Review 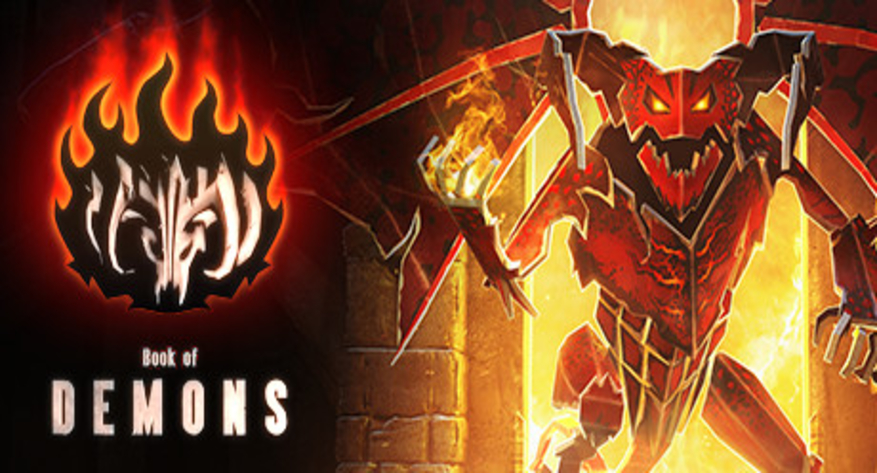 After two and a half years of testing, The Book of Demons, developed by Thing Trunk has been officially released. The Book of Demons is a hack’n’slash game, reminiscent of titans of the genre like the Diablo franchise or Torchlight, except with a pop up book aesthetic. It’s the first instalment of an upcoming game series called Return 2 Games, which aims to introduce audiences to a classic style of hardcore gaming. I have had the pleasure of playing this game through its early access and I can say for certain that it has potential as it is unique, challenging, and a lot of fun.

When I first started the game I didn’t have a lot of hope for it. The plot of the game seemed boring, and the premise of scaling level after level while having a lack of control over what I could do was just bad. That’s right, you heard me: lack of control. While I’ll leave the bigger details for the gameplay section, I’ll say that using pretty much only my mouse to do everything is quite annoying. Originally this really irked me, but the more I played the more I came to find the game strangely addicting. Whereas most hack’n’slash adventure games are chaotic and mechanically driven, having a more tactical and strategic approach to the genre was actually very welcoming.

The plot is set in the Paperverse, underneath a cathedral in a small town. Below the holy place are corridors of dark and twisted mazes, where an awakened evil lurks, preying on the livelihood of the town. Their only hope is the player, a wandering hero who can free them from the ultimate evil.

I find this setting quite boring and simple as it has been overused for many games. What I will give credit though is that it’s simple to understand and follow, and directly links to the mechanics of the games. The NPCs are all relevant and useful, and this setting makes the repetitive levels more sensical in a narrative point of view. What is also great about the narrative of this game is how it is presented. Instead of forcing cutscenes and long dialogues of text, it’s actually optional. If you talk to any of the four townspeople, you can discuss rumours which builds the world in a very satisfying way. The townsfolk are all unique in their personality and hammering the world building in place. So while the plot is simple, its inner workings are all spectacularly done well.

Unlike typical hack’n’slash games, The Book of Demons revolves around a linear style of movement and combat. Using the mouse you navigate a line through the level and automatically attack enemies. Holding down the mouse of said enemies attacks faster. Having this mechanic based around just your mouse, it is impossible to just run in blindly. You have to plan your actions in advance if you want to proceed. Health and Mana do not regenerate and thus playing recklessly will punish the players. There are also options to make the game roguelike, with an active global leaderboard established.

The player can choose up to three classes: warrior, mage, and rogue, each with their own unique play styles and difficulty. The warrior is armoured and beginner friendly as they don’t require many spell cards and rely more on artifact cards. Mages are harder as they have a need to cast spell cards and Mana is a scare resource that doesn’t recover over time. The last, and hardest in my opinion, is the rogue as she does not have the clearing damage of a mage, but relies on tricks and item cards.

The most unique thing about the game and the main reason why this game is unique is the card system. Instead of stats, skills, and equipment, it uses a card system with three types. Artefacts give passive effects by locking a certain amount of Mana. It doesn’t actually use Mana so these cards are the easiest to use. Spell cards are pretty much active skills like in any other hack’n’slash game, and item cards are limited usage cards that have to be charged by the Fortune Teller by paying gold. There are currently three variants of cards: common, magical, and legendary. A common card does not have any additional bonuses, while magical cards gain one random bonus power, and legendary cards have two magical bonuses and one unique legendary bonus.

There are currently four NPCs in town which the player can interact with. The Sage identifies cards that you earn in the dungeons as well as maintains the bestiary, which holds information on enemies. The Fortune Teller upgrades cards, recharges item cards, and fuses rune cards. The Barmaid makes stew from ingredients you find in the dungeon, giving bonuses. And lastly the Healer heals the player and brings back the player from death. Overall all NPCs cover a wide variety of roles and are necessary to progress forward.

In my opinion the art is my favourite part of this game. The paper-like aesthetic fits so well into the world as it is unique and creative. There are rarely any games that go outside the norm with creative choices like this and I for one love it. All characters and enemies are distinct, easy to recognise and all fit the world like a glove. The simplistic but wide drawing styles for the paper makes it stand out more, and I implore you to check it out.

The music, on the other hand, is enough to set the ambience of the mood well enough. It’s dark, tense, and that’s about it. It doesn’t really go beyond the norm to establish the mood beyond what is necessary. So while the choices and style of music are form fitting, it could be further established, though not necessary.

Overall The Book of Demons is a great first instalment into a franchise. It’s simple and effective as a game, with great choices that work well together. It takes the hack’n’slash genre to another level with it’s creative choices in the gameplay, making it both strategic and challenging. I really recommend this game to those that love the hack’n’slash genre as it is another approach to the genre.

THE GOOD
Simple
Unique and distinguished
Beautiful and fitting art
Easy to play, hard to master

The Book of Demons is the first of the Return2Games franchise set in a world of complex mazes and levels of hordes of enemies. Unlike the typical hack’n’slash though, it rewards players who are smart and tactical, with varying degrees of play with the card and class systems. Despite it’s cheerful and paper aesthetic, it is quite dark and a very unique world. I truly recommend this for fans of hack’n’slash games, or for those that like to try creative works of art.