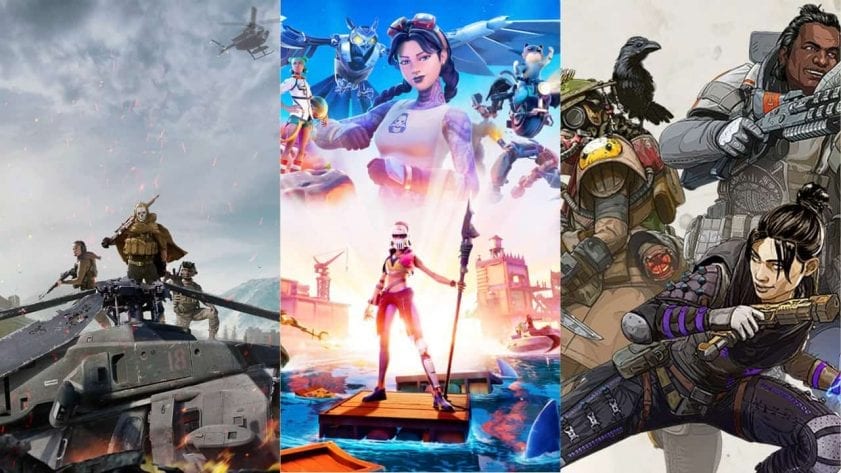 Battle Royale games have been a part of the gaming community as of late. The genre has garnished new heights with its last man standing premise. Within this premise, you have options to either play solo or tag along with your friends in squads. Starting from the PC underground days of H1Z1 into the mainstream pop culture with Fortnite, battle royale is here to stay. It seems nowadays everyone is hoping to get a slice of the battle royale pie. It’s a hit craze that has pulled gamers away from traditional multiplayer and single-player experiences. You are not guaranteed to end up on top, but something about the “try, try again” concept that keeps players going. I have binged heavily in Apex Legends and Warzone lately, and it still gets me excited to play, win or lose.

However, I ask myself, “How long will battle royale style games last on the market?” Have we come to terms with the survival of the fittest concept in gaming? Or is this a trend that is slowly dying out? We have seen this occur in past genres, such as interactive mobile gaming and team-based competitive shooters. Yes, those genres are still flowing, but the spark isn’t there anymore like it used to be. When is the last time you got an invite to play Trivia Crack or Team Fortress 2? It just doesn’t often happen because people move on to either new games or new genres. While playing a game so much can be repetitive, battle royales show no sign of slowing down. Its rinse and repeat concept seems to have players eager for more.

Let’s analyze the battle royale phenomenon. Is it something to move forward in the future or will it be left behind in the past?

The battle royale life cycle is a concept players should be familiar with. It’s similar to the product life cycle for all you business majors out there. For those who are not, a product life cycle is a process a product or idea goes through as it enters the market. It has four primary stages: introduction, growth, maturity, and decline. Now I’ll relate this to the “Battle Royale Life Cycle.” The introduction stage for a battle royale starts from rumors and speculations to early adopters in alpha and beta testing—this is where battle royale finally tests the market as more players flock to the servers. The growth stage occurs when the beta is over, or the beta is enhanced with microtransactions with the player base reaching a substantial amount.

The maturity stage is where a battle royale has to keep the player base in the palm of their hands, in the form of new updates and battle passes. Meaning if a player likes the game enough, they can purchase a pass for cosmetic benefits such as skins, emotes, and sprays as they level up. Think of this as clout in the gaming world. Along with battle passes, are seasons, which can change the game every 2-3 months. These changes keep the player interested and not bored with the same maps, weapons, or concepts. The last stage is decline; this is when the player base has shrunk, and only the hardcore players are left. However, this can occur in two ways either the player gets tired of the game or a new battle royale/multiplayer game has hit the market.

Mostly every battle royale game has gone through this cycle, except for one game.

While the decline for battle royale-style games is inevitable. Fortnite seems to be the only game that hasn’t been snapped out of existence or at least mainstream media. Why is that? Fortnite is a genius franchise in execution. I’m not a big fan of Fortnite, and I know a lot of people will cringe by the name, but Fortnite is a benchmark for battle royales. Fortnite has captured the interest of many celebrities like Drake, Travis Scott, and Dj Marshmello, to name a few. It also created a few celebs like popular streamer Ninja. Like the guy was on the cover of ESPN. No other battle royale game has cultural influence like Fortnite. It’s the only game where Rey from Star Wars can fight Deadpool — at least as unlockable skins. Not only that, but Fortnite has new updates every week of either a new weapon, item, or event.

Each season introduces a new concept or map change that has players buying V bucks for another battle pass. So many companies hopped on the Fortnite bandwagon, including Air Jordan, DC Comics, Marvel, and Christopher Nolan’s Syncopy. Fortnite has hosted live virtual concerts like Marshmello and Travis Scott. While players witnessed epic events such as a giant robot and monster battle and a black hole that wiped the game off the map. I know a lot of ten-year-old kids were crying to mommy and daddy on that day. I’m kidding, but you can not deny Fortnite’s gaming impact. Epic Games went from chainsawing Locust in Gears of War to becoming the center of attention with 150K viewers daily on Twitch. Love it or hate it, Fortnite is an influential game not only to the battle royale genre but gaming as a whole.

That is good or bad, depending on who you ask.

The Problem With Battle Passes and Microtransactions

As mentioned before in the growth and maturity stages of the “Battle Royale Life Cycle.” Battle passes and microtransactions are the norms. Battle passes are a great incentive to getting more content out of virtually a free game. Earning rewards as you level up is enticing to many players to encourage playing more to reap the maximum benefits for that season. Another method to shortcut from grinding is microtransactions. It’s easy to be envious of a skin a player has that just mopped the floor with you. Only to find out that the skin is legendary, and you might need to spend days or weeks to get it. In this case, you have three options:

The problem lies with battle royale is while a new skin is great, you’ve also lost money. Skins are permanent, yes, but the interest of the game itself is not. Battle passes are a hassle if you are participating in multiple games. You can easily shell out $30 ($10 each pass) for three games and try to play all of them to get to level 100. However, it’s unrealistic. You may need to pick and choose what you want unless you decided not to have a life outside of gaming. In the end, you will just be losing money because a decline will eventually occur. You will turn your attention to another battle royale game that will give the same process as the last. There is a silver lining with in-game currency rewards that bypass utilizing your wallet to buy a battle pass if you grind enough.

The Future Of Battle Royale

It seems battle royale is here to stay for the time being. I enjoy shouting out for an enemy while my teammates loot, and I am left downed and taunted before death. Not really, but battle royales are addicting. Getting to the top spot no matter how hard the road is to get there, is ever so satisfying. Games such as Call of Duty: Warzone and Apex Legends are still producing content for their audience. At the same time, Fortnite will always remain around no matter what, even if they took some concepts to ensure its longevity. But, you know, “survival of the fittest,” I guess. Perhaps team competitive multiplayer will step in to take the crown, with Valorant, Rogue Company, and Overwatch 2 on the horizon. One thing is sure, while one battle royale falls, another one will eventually take its place.