Swordbreaker Back to The Castle Review 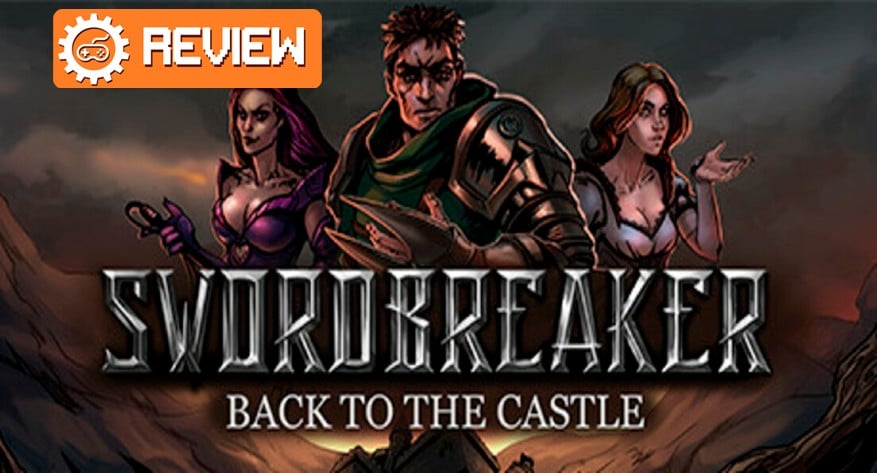 A ton of indie games get released each and every year in the gaming industry. Some are complete gems, whilst others… Not so much. When I first saw Swordbreaker, back to the castle, I was quite impressed by how it looked by some of the gameplay videos I watched. So I thought to myself, hey, why not give this potential gem of an RPG a go! Here are my comprehensive thoughts on Swordbreaker Back to the Castle that is currently available on Steam for around $7 USD.

Now, just a bit of a heads up about this review firstly before I get started. I like detailing my experience from start to finish when writing reviews so please understand that th­­­­­­­ese are my thoughts of the experience I have had with the game so far. This review was provided by the developers of the game DuCats.

When I first turned on Swordbreaker, Back to the Castle. I was pleasantly surprised by how small the game actually was and how little space it needed to be installed. This delight was short-lived, however, and as I jumped into the game, I was pleasantly surprised by how good the game looked. I don’t want to sound like I’m beating a dead horse or anything but let me clarify a few things.

The opening cinematic lasts for around 20 seconds or so and barely explains why you are looking for the said castle (hence the name “Back to the castle”) It gives you absolutely no story as to who you are as an adventurer either leading to a bit of an awkward opening sequence. When I game I like to get attached to characters, like Geralt from the Witcher series, you have the chance to identify with the character and understand just what he is going through as a mutant and also a Witcher. But there is none of that here. All you get is a static slideshow of sorts explaining what the castle contains and that you “want to embark on an adventure”

Moving past the introduction to the game, you begin your journey on a road that leads off into a forest area where you can get attacked by Boars and Bats. This then leads me onto enemy design and characteristics. If you get hit 3 times by an attack from a Boar, you die. Bats deal a little less damage. I found it impossible to attack boars as is however as they run in circles around the player and then charge at you. If you attack the boar before it strikes you, the attack makes no difference to the boar’s path and the animal will still ram into you dealing huge damage. I found this rather frustrating as not even 10 minutes into the game I was dying from the very first enemy I came across. Bats were a lot easier to attack and kill which was a nice change and feeling compared to dying every two seconds from an oncoming Boar.

Another issue I had with Boars and bats specifically was the ability to not be able to run away. If you are low on HP or don’t have the required equipment to confront 3 Boars and 2 bats at the same time…. Well, let’s just say you are D.E.D.DEAD!

I also found that when a Boar would head-butt you with an attack, it would quite often send Swordbreaker (The knight you play as… I know, weird name right?) ragdolling halfway across the map. This was kind of funny, to be honest as I would quite often not expect such a thing to happen and it would catch me off guard. Now, I am not sure if this is intentional game design, or a glitch (which this game has plenty of.) Speaking of glitches, Textures would constantly stutter and spazz out, you can pass through solid walls, and if you fall in a river, you were unable to swim and this very generic text would appear above your head saying “Drown” Not, You are Drowning, just Drown! Also, Skeletons, Boars and Bats would spawn in certain areas uncontrollably meaning you were unable to pass through certain sections and Progress in the game. I am not sure if this is intentional or not, but it was rather annoying.

A slightly too Open World

As far as world development and atmosphere, the world in Swordbreaker Back to the Castle is set in is rather empty and very lonely. I saw a total of around 2 people in the world during my playthrough of the game and villages would be empty. The same can be said of roads and camps. The general ambience of the world is actually rather nice as you can hear birds chirping in forest areas and water rushing by when near rivers. The music in-game however is very repetitive and is the same music over and over again no matter where you are. When in fights, the same track repeats itself as well leading to frustrated listening and repetitiveness throughout. After around 10 minutes of gameplay, I ended up completely muting in-game audio, I was incredibly frustrated by how repetitive and samey the music was no matter where I went.

Progression in Swordbreaker is non-existent, I rarely felt like I was achieving anything even when I found new Armour or a new sword. These items barely did anything to stave off the repetitiveness and boringness that is the gameplay. Swordbreaker is split into worlds (world 1-1 etc) and these worlds are in turn, open in nature. Unlike the Witcher or Skyrim or any half-decent RPG for that matter, Swordbreaker fails to drive you from objective to objective and kind of leads the player hanging. A lot of the time there is absolutely no objective and you are just randomly running around with nothing really to do. Yes, I realise that a lot of games do not hold the player’s hand at all nowadays in gaming. AND THAT IS TOTALLY FINE! But a lack of direction or even a hint of what you are supposed to be doing in the world is rather annoying. I felt lost, alone and rather annoyed at the lack of direction and guidance (or even tutorials for that matter) and you kind of get dumped in a world you know nothing about or care for. Let me be clear here, I’m not complaining for the sake of complaining. I just…. I just wanted a world I could feel invested in and had the interest to return to.

Let’s talk Swordbreaker for a second (The character, not the game) Everything he does uses Stamina meaning whatever you do, you run out of stamina super fast. This in turn means (in order to refill your stamina quickly) you have to stop moving completely and wait 5 seconds or so for your stamina to refill.

Alongside this, character movement in-game is rather bulky and hard to control. If you are trying to cross a bridge or movement precisely in any manner, you will have extreme difficulty doing so as the movement box is so large. For instance, to turn around, rather than just spinning on your heels, your character has to take 1 step forward and two steps to turn around, causing you to fall off any and all ledges you may wish to cross.

Overall, Swordbreaker Back to the Castle is a…. I don’t know how to say this… But, it’s really bad! Seriously, if you are looking for a decent RPG, please do not buy this one. It almost does everything wrong, from empty open worlds to glitches and overpowered boars and enemies. Unfortunately, the game controls even worse with clunky combat, bad manoeuvrability and just downright lazy development. And for around $7, it’s overpriced. Personally, I wouldn’t even play this if I was gifted it.

Overall, Swordbreaker Back to the Castle is a…. I don’t know how to say this… But, it’s really bad! Seriously, if you are looking for a decent RPG, please do not buy this one. It almost does everything wrong, from empty open worlds to glitches and overpowered boars and enemies. Unfortunately, the game controls even worse with clunky combat, bad manoeuvrability and just downright lazy development. And for around $7, it’s overpriced. Personally, I wouldn’t even play this if I was gifted it.