Strange Video Games Based On Movies And Television 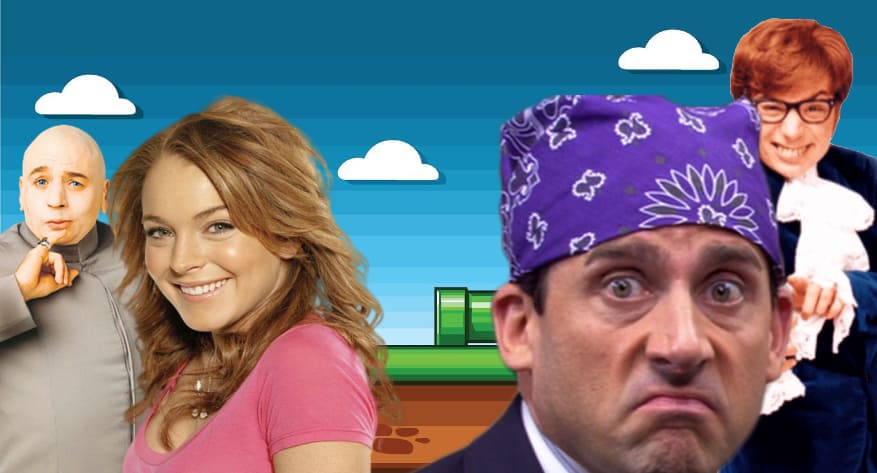 There used to be a time in video games where developers would make anything based on popular media. This was a chaotic time for games, relying mainly on the name behind the source material rather than good gameplay. It was a relative mass vomiting of mediocre games based on popular media that had no need for a game. This is a list of some of the strangest titles I have come across in my gaming.

Source: Official webpage of “The Office”

The Office is an insanely popular series that still gets viewed in my household on a daily basis. There is a magic behind the series in which makes it never become old. The jokes never go stale and the characters never fail to make you laugh or cry.

However in 2007, developer Reveille made a strange Diner Dash clone based on the series which featured the beloved characters as bobble heads. The goal was simply to basically deliver work to the cast members as Jim Halpert, the show’s relatable character. I do not own a copy of this game because I never knew it even existed, and I am completely okay with this revelation.

Adam Sandler had a string of hits back in the 90s and early 2000s, including the 2000 cult hit Little Nicky. The film follows the story of one of three sons of the Devil going to Earth and living among humans. The titular character’s two older brothers also leave Hell in order to attempt to become the new ruler of Hell. Sounds like a cool set up for a video game where the younger brother must battle the older brothers for control, yeah? No.

The game was published by Ubisoft on the Game Boy Color and had an opening scene almost identical to the movie opening. Yeah, the Game Boy Color had a game that featured a strip tease scene. It was complete with a pixel version of Jon Lovitz being a peeping tom that goes to Hell. The game was a side scroller that put you in control of a hobbling hunch back Nicky, as you navigated hazards in true old school fashion. I unfortunately had this title.

Tim “The Tool Man” Taylor was not only a household name in the 90s, but in my household, he was exactly like my father. We even shared the same surname of the family in the show Home Improvement. Tim Allan plays Tim Taylor, the host of Tool Time, a fictional show within the sitcom about power tools. The show focuses around the hi-jinks of Tim and his family, comprised of himself, wife and three sons.

How would you ever make a game based on this show, or any sitcom about comedy and family values? You make it a side-scoller with power tools as weapons, and a sprite of Tim Allen fighting dinosaurs. What is not to love? I owned this game and indeed did love it. It has a great style to it that really showed that no matter how weird, the game was made with some love.

Let’s face it, did you even know there was a movie called TOYS starring Robin Williams and Joan Cusack facing off against militarized toys? When I ever bring up this film or the video game tie-in, people never have a clue about it. The film almost feels surreal to me at this point as the settings and art direction is so whimsical to conceive in my adult brain. The film is about a toy company being left to the military uncle of Robin Williams’ child like character and how he plans to use it to make toys of war. This of course does not fly with Robin and he sets out to stop him.

This does work for a video game, if the weapon you used was not a completely useless peanut gun that take pixel perfect accuracy to use against small scale enemies. The level design is also bland, lifeless and for some reason when you die, Robin crawls into a hole in the ground. Weird, I will stick to my SNES Hook game, that’s the Robin Williams I love

Austin Powers is a classic comedic series that blew up and became a trilogy. The films have a multitude of content that could possibly translate very well into a video game format. Even if the film was a comedy, it had enough action in it to form levels and decent gameplay. There are so many memorable characters that could be wonderful bosses as well. So with Rockstar as a publisher, the title had to be something special of course! No, we got a computer simulation, two at that.

The games, yes games, featured a simulation of both Austin’s and Dr. Evil’s computers depending on if you bought the Oh Behave! Or Welcome to my Underground Lair version of the game. The only other gameplay featured in the game were mini-games such as rock, paper, scissors, a Pac-Man clone or a very poorly done side-scroller. This was one that I wanted as a kid, and happily missed out on.

This last title is a complete and total mystery that actually existed in some form or another. 505 Games has a Q and A page with a post about the title asking where to find it. The answer to the question is that the game was never published and unused assets are not available. The cover of the game is known to lack the star of the film as around the time of the game Lindsey Lohan’s public image was not the best.

The game, which has no footage, apparently features a slew of mini-games which around this period for movie tie-ins was not uncommon. This title is a huge enigma and hopefully some footage will be uncovered one day as there is one record of the game being sold at some point, as well as one screen shot online. This is not to be confused with the mobile game. Just trust me when I say it is a total rabbit hole trying to research this game. I would love to have a copy to display in my collection, even if I did not watch, nor become a fan of the film. All I know is that on Wednesdays we wear pink.

This is only the surface of popular media tie-ins, however I wanted to show some that honestly did not need a video game adaptation. A few others have come to my attention, including a mass of Disney show based video games. Regardless, hopefully you learned today about some games you had no idea existed.