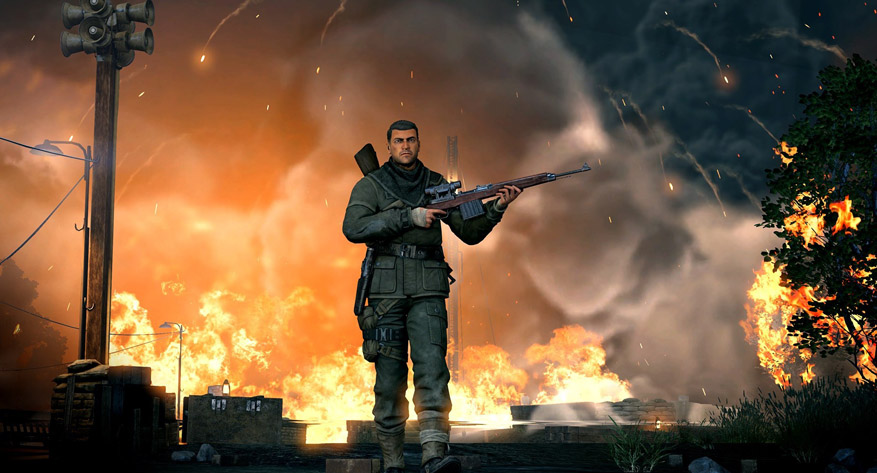 In the video game world nothing beats the sound of bodies breaking. Whether it is piledriving someone in Fire Pro Wrestling, landing an uppercut in Fight Night, “finishing” an opponent in Mortal Kombat or barbecuing a zombie with a fire-breathing triceratops head in Dead Rising, bodily harm is very satisfying in the fantasy world…not in reality of course. Those kinds of actions would be very, very bad unless you are a boxer or a wrestler then good on you! You are just doing your job.

With the visual improvements made in Sniper Elite V2 Remastered those kills look even more glorious than ever before. In fact, the entire game has so much more detail that original looks kind of flat in comparison, like the graphics on any last-gen console do over time.

In a sniping game visuals are so important which is why this remaster is a better gameplay experience all around. For those who haven’t played Sniper Elite V2, it various little from Sniper Elite 3 or 4. There is no mini-map to guide you or give you the lay of the land as you creep around. The maps are more confined and rail-like. The AI also isn’t as clever. Instead of immediately taking cover they will the cheat and just moving around non-stop like chickens looking for their missing heads so you cannot target them well at all.

The check points in V2 as opposed to 3 or 4 are certainly more exasperating as you can easily find yourself in a 10 minute battle, die and be transported right back to the beginning of the battle forcing you to play the same exact scenario all over again.

I must admit, some of the checkpoints had me seeing red as pushing a player that far back in what is essentially a stealth game where you have to creep along slowly, constantly taking cover and clipping one target at a time is really unfair to the player.

For those who are new to the franchise you play as an elite sniper, the elite solider of the title, assigned specific targets to send to the afterlife as well as completing specific mission objectives such as blowing up bridges, destroying anti-aircraft weapons, rescuing hostages, collecting important intel or halting convoys of supplies or VIPs.

So yeah, sniping people is just one part of your duties. You are an all-purpose agent like Rambo or all the members of the A-Team or The Expendables all rolled into one.

You complete the majority of the assignments with your sniper rifle but there are times when explosives or a rocket launcher will do the trick.

You are also outfitted with land mines, tripwire traps, grenades and dynamite. If you are feeling particularly clever you can even plant explosives in dead bodies to leave nasty surprises for your enemies.

Sniper Elite is mostly a stealth game with a run and gun element thrown in. So even though causing a raucous may be fun, you are really outmatched in close-quarters combat especially when swarmed by many enemies at once. That kind of combat is so heavily weighted in their favour that you will not survive most of those encounters with the enemy.

Bundled with Sniper Elite V2 Remastered are all of the original DLC including the mission where you rub out Hitler, optional 60fps Performance Mode and except on the Nintendo Switch there is support for 4K and HDR.

You can also play as any of the eight characters from the Zombie Army series. This includes in multi-player and the campaign itself. There is also a photo-mode for screenshots too.

If you came late to the series, never played V2 and are a fan, Sniper Elite V2 Remastered is a must-play and a great deal with all of the bundled items including the DLC. For those who have followed the series since the beginning, V2 Remastered does look much better and play much better but whether you wish to play through the same adventure again is a matter of personal taste. Just be aware that the gameplay is exactly how you remembered it, a far cry from the sequels.

THE GOOD
Enhanced graphics.
All the DLC is included.
The x-ray kill cam.

A noticeable and remarkable update but it is essentially the same game and is dated when compared to the third and fourth installments. This is for newbies or die-hards only.