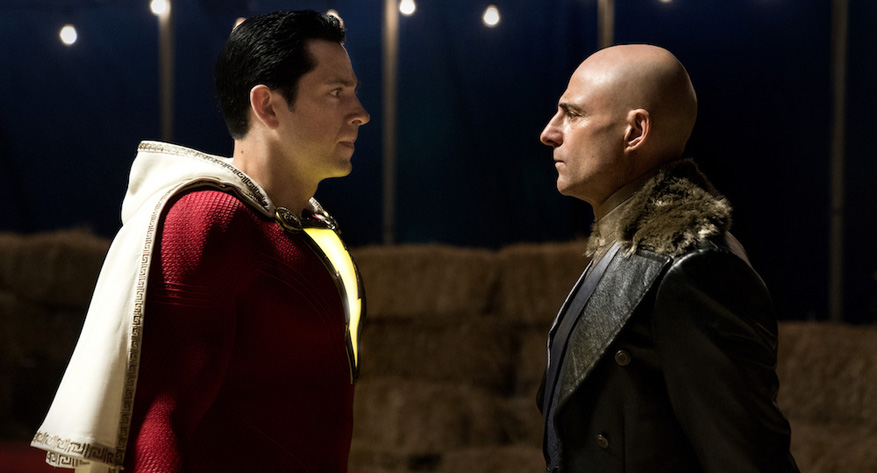 As a life-long comic book fan I never thought Shazam, the original Captain Marvel, was cool in any way. Originally, he was portrayed as a dopey version of Superman and like Supes even his entire family became cheap knock-offs.

A hero is only as compelling as his enemies are and Shazam’s were so very lame. There was Doctor Silvana, the mad scientist , Mr. Mind, a ridiculous genius worm, King Kull, a blathering caveman, an elderly mobster named Aunt Minerva, the mind-numbing list goes on and on.

Starting in 2001, the Justice League animated series took a whole bunch of weak DC Comics characters, modernized them and made them cool again. Shazam was no exception. Shazam! the movie is the next stage of Captain Marvel’s evolution.

He is not just cool. He is freaking awesome! Much of the credit goes to Zachary Levi who made his mark in the Chuck television series as a computer geek who becomes the next James Bond, well, sorta. Levi has that everyman quality and is able to bring that child-like sense of wonder to the surface for the role without wandering into cheeseball territory. He is a superhero with a heart and like most teens, has an obsession with fitting in and being popular.

For those who aren’t up on their comic book history, Shazam is a twist on the whole Freaky Friday plot. Billy Batson, an orphan, homeless teen is given the powers of the Greek, Roman gods by a mystical wizard.

By saying Shazam out loud, Batson transforms into an adult with incredible abilities but retains his teenage brain and attitude. That is the major hook of the character. Even though he becomes an adult with powers rivaling that of Wonder Woman or Superman, he is still a kid who at times acts irresponsibly and has a lot to learn about himself and the world.

This journey of self-discovery is at the heart of Shazam. Once he gains his powers, Batson (Asher Angel from Disney Channel’s Andi Mack) starts a Youtube channel, he poses for autographs, illegally purchases alcohol, all in all not living up to the Arachnid Guy moto: “With great power comes great responsibility.”

It takes an accident caused by Shazam himself for him to realize that he is squandering away his abilities on selfish, hollow, pointless things.

Billy is summoned by the wizard (Djimon Hounsou) to fend off the Seven Deadly Sins, who are portrayed as drooling, ghastly demons, but he wasn’t the first to be contacted. That honour goes to Thaddeus Sivana. Sivana was found unworthy by the wizard. An angry Sivana stole a magical crystal giving him incredible powers and the ability to summon the Seven Deadly Sins demons to do his bidding.

Portrayed with devious glee by Mark Strong (Merlin in The Kingsman series, Sinestro in Green Lantern) Sivana is deadly, dangerous and a perfect foil for Shazam in every way which is light years away from the original comic book character. The one advantage he has over Shazam is not only having a genius intellect in a General Zod-like body but he is an adult with wisdom and experience. Beyond his super strength, laser beam eyes and speed, that is his deadliest weapon against Shazam.

While also trying to figure out a way to stop Sivana from absorbing his power, Billy Batson searches for his birth mother whom he was separated from years ago.

Bouncing around from one foster home to the next, Batson’s latest stop is a home filled with a motley crew of misfits whose differences are what make them such a loving, unique family. The family is kinda cheesy in an eighties sitcom kind of way but funnily enough, they are very charming probably because they are written like real people not caricatures, tropes or an obnoxious Burger King Kids Club.

We have Mary (Grace Fulton), the older sister who is destined for college but doesn’t want to leave her family behind. There’s Darla (Faithe Herman), the clingy and adorable kid sister. We have Eugene (Ian Chen), the gamer kid and tech genius. There is Pedro (Jovan Armand), the strong, silent type.

Mom and Dad are Rosa (Marta Milans) and Victor (Cooper Andrews) Vasquez. Former foster kids and runaways themselves they run a different kind of family household drawing from their own experiences growing up.

Fans of The Walking Dead may recognize Cooper Andrews from his role as Jerry and from playing Yo-Yo Engberk on another AMC drama, Halt and Catch Fire. Besides the leads, Andrews is the real standout star in Shazam! He is the Yoda of fathers. He is cool, wise, strong but most of all he has an enormous heart. He is the personification of a warm hug.

Another stand-out is Freddy (Jack Dylan Grazer who played Eddie Kaspbrak in Stephen King’s It), Billy’s partner in crime. A superhero fanatic, Freddy is more than Billy’s sidekick he is often his conscience and voice of reason. Freddy is disabled; however, that is not what defines Freddy or the character. Freddy is very self-deprecating and besides his first meeting with Billy, doesn’t make an issue of his situation. It is a refreshing, encouraging take.

Shazam!’s only shortcomings are firstly, the filmmakers shoehorned in a couple of PC moments. One in which a woman doesn’t need no man to save her and a character admitting they are gay in an understated way. Hollywood’s obsession with robotically checking off every box in their PC list to the point of squeezing in moments that come off as inorganic, preachy and contrived is now reaching the point of absurdity. Not every film has to feature every identity imaginable or make some kind of political statement. These pretentious and counterfeit moments clash with the sensitive and astute handling of the foster family who have no agenda other than to be relatable human beings and not two-dimensional, moralizing Captain Planet-like cartoon characters.

The other issue I had is one that I have had with all of the Warner Brothers’ superhero shows on TV. Even though I am a true blue superhero fanatic, it, beyond anything else, caused me to switch off almost all of their shows after a few seasons. They all have drifted away from their core character in favour of transforming everyone on the show into a superhero. Everyone from Grandma Jean to the local gas station attendant has to be a hero. Not only does the title character become a supporting character on their own show because of this but they are just not as unique or special anymore because now even Skippy the pizza delivery boy has super speed. Those paint-by-number WB superhero shows are going the way of Disney’s animated movies did in the late nineties and 2000’s when moviegoers became bored of their recycled animated film formula. I fear this is what Shazam! will become if there are any sequels and that would be a waste of talent and waste of the character.

For a superhero movie, Shazam! has a lot of meaningful moments and surprisingly, a lot of heart. It is also the most fun I have had at the movies since the original Deadpool sauntered and swaggered on the scene. And that is what Shazam! is all about. It is just plain fun. Although I love gritty, dark superhero films, it is a welcome change to see something like Shazam! and its carefree attitude is what separates it from all the other live-action superhero films that have come before it.

A note to parents though, despite the lighter tone, Shazam! is not a film for younger children. There are many intense characters and scenes such as the Seven Deadly Sins demons slaughtering a boardroom full of executives, which might frighten kids. That particular scene ends with a point of view shot from the hallway as the executives claw at the glass windows and scream as they are dragged away. You have been warned.

THE BAD
Some PC unnecessary moments.
Is a superhero family on the horizon?
Not for very young children.

For those tired of the brooding, morose…Why so serious?…superhero movies. This one is for you.