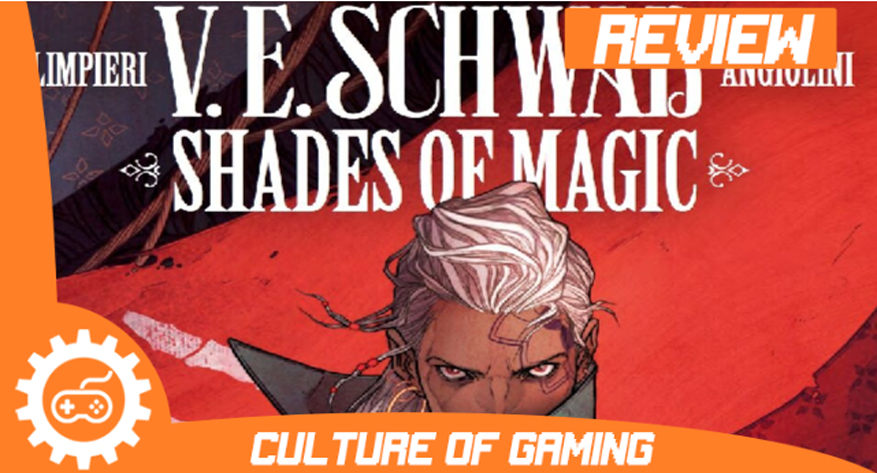 We get another issue in this mini-series about Maxim Maresh, a character from the Shades of Magic book series. Prince Maresh is a sorcerer, who we met in the first issue, with the magic ability to manipulate and control metal  The Prince is worried that the magical seals keeping the other realms separated could fail and he wants to find magician powerful enough to teach him the forbidden magic. However, the King decided to send Maxim to Verose as a test. It’s a lawless town filled with danger and crime. Maxim, having proved himself to Isra and her fellow band of soldiers, now faces an even greater threat in this issue of The Steel Prince.

The first opening pages we see Prince Maresh having a sparring match with Isra. She is a capable soldier of his father’s military and the leader of the base in Verose. We witness an enthralling interplay between Maxim and Isra as they banter about what it means to be a loyal soldier to the crown. Maxim clearly can hold his own and is a capable fighter but lacks the reality of the common folk. While Isra is distrustful of her royal counterpart because of his upbringing. Suddenly after this small training exercise, word gets to the base that a fearsome pirate has returned to Verose, Arisa Rasora.

All Hail the Queen

It takes just a couple panels to show why the Pirate Queen is feared and worshiped. She is possibly the most powerful Bone Magician in the entire kingdom. Having heard the news, Prince Maresh wants to bring this rogue to justice. However, Isra quickly informs the young prince that Arisa isn’t someone to be taken lightly. We see a power struggle between Maxim and Isra as he wants to mount an assault on Arisa. At the same time, Isra wants to make sure all her soldiers stay inside the base.

It becomes clear the Isra isn’t telling the Prince the whole story. Another soldier helps fill in the rest. Arisa is a powerful and deadly enemy but no one fully knows her ways other than Isra. The pacing of this issue is quick and purposeful by setting the state of Verose, Isra’s motivations, and the incredible might that The Pirate Queen Arisa. Like the previous issue, the art is fantastic and the use of different colors for other types of magic helps the reader follow the action.

The Rule of Family

The Steel Prince #2 is a perfect follow up to the first issue. It establishes a compelling character dynamic between Maxim and Isra. This chapter also creates an intriguing threat that requires more than brute force to take down. This is a great and well thought out issue that keeps the momentum of series at an all-time high while also developing Maxim’s character and introducing Isra as a strong counter to his royal heritage. We get two sides of the same coin as both Maxim and Isra have opposing viewpoints on what family represents. Maxim’s father, The King, and Isra’s aunt, The Pirate Queen, both are testing their younger family members by challenging their sense of power and control. I can’t wait to see what the next issue has in store for the Shades of Magic series.

THE BAD
Bland Side Characters

Shades of Magic: The Steel Prince #2 is a great follow up that raises the stakes and develops a new threat for our heroes to face. Maxim and Isra both explore several topics within the port of Verose such as power, family, and law. There is a new player in town that is both powerful and dangerously clever. Find out how Prince Maresh and Isra will set their differences aside in order to bring in the famous Pirate Queen Arisa!