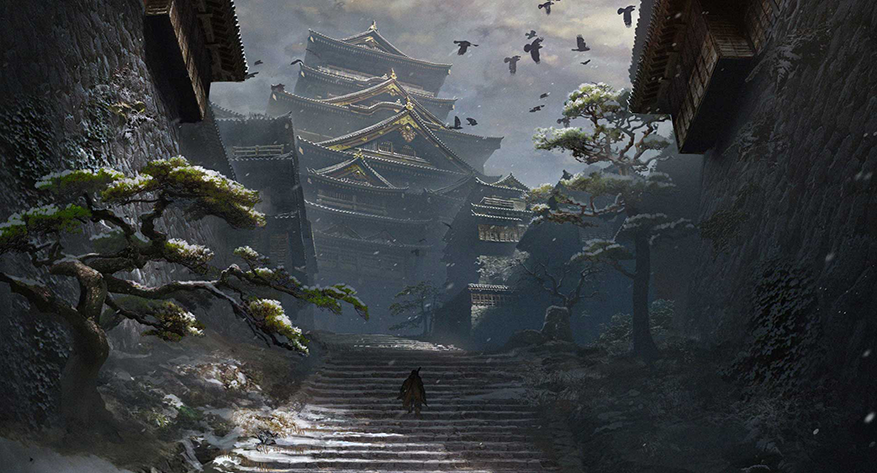 Sekiro has the unfortunate disposition of being a mere side project by FromSoftware. Earlier this year, I gave Sekiro: Shadow’s Die Twice a glowing review, and even a few months later, still do the occasional run through. Sekiro is perhaps the best quote un-quote “side project” a game developer has ever produced. However, that’s just the thing. Sekiro is a side project from FromSoftware. And looking back through the game with this in mind, it’s clear where Sekiro is perhaps… experimental, which would lend credence to it being more of a testing ground for future projects by FromSoftware.

Setting the stage as to why I believe Sekiro is a side project, a few things come to mind. For starters, the level design and structure. Don’t get me wrong Sekiro has absolutely beautiful environments. However, by comparison to From’s previous titles, the environments and levels in Sekiro are limited, and a  few are reused throughout the game.

Dark Souls has always been praised for the large, looping, and interconnected open world brilliantly designed by the developers. Everything magically loops together, often times a side door will lead back to a shortcut that takes you back to the hub of Fire Link Shrine. Alternatively, by the end of a ‘level’ in Dark Souls, a path most obviously in front of you leads you back to Fire Link. When first playing through, this was one of my favorite parts of Dark Souls.

Contrasting Sekiro, Sekiro employs less of an interconnected world and more of perhaps a …tree-like structure. There’s a central area, the ‘trunk’ of this tree if you will, which is Ashina Castle. From Ashina Castle, the areas of Sekiro are connected, as you can get to just about every area of Sekiro using Ashina Castle as a direct jumping-off point. These areas form the branches stemming from the trunk.

Due to this tree-like structure, it requires either a lot of backtracking or use of fast travelling once having completed a ‘level’ in Sekiro. I am by no means calling FromSoftware lazy, or anything of the sort. But, it requires a lot more time and effort to be expended by developers to make a world competently interconnected and looping like Dark Souls is.

This is perhaps the first indicator that FromSoftware didn’t spend as much time and effort on Sekiro as they would say on a Dark Souls title.

Perhaps the most glaring experiment in Sekiro is the combat system. Sekiro’s combat system is quite the changeup from any previous FromSoftware game. Gone are the days of having to use stamina to roll and time invincibility frames to avoid damage. Enter an infinitely more engaging combat system in Sekiro, which makes more use of rhythm and timing than the previous system.

This was a brand new combat system by FromSoftware. Perhaps it was meant as a one-off thing, or looking ahead to Elden Ring, maybe that title will have more of a Sekiro-like combat system. This new system also met FromSoftware with several balance changes. As is the nature of the beast, in order to balance the difficulty in Sekiro, FromSoftware couldn’t just tweak damage numbers as they’ve previously done. But rather, they had to go as far as to tweak animations frame by frame, making them slower or faster in order to decrease or increase the difficulty respectively.

More to movement, another concept introduced in Sekiro not really present in past titles is verticality. With the Shinobi Prosthetic, players were given a fun new tool that opened up a multitude of possibilities in Sekiro. FromSoftware seemingly experimented with this and littered the environment with grapple points the player can zip about. This was a good concept, and as I stated previously in my review, the system mostly works. But this is by far the sole aspect of the game that feels the most experimental, as it doesn’t always work properly.

Taking all of this, it’s easy to see that Sekiro was designed to be a veiled testing ground for new mechanics FromSoftware would maybe like to implement in Elden Ring.

Perhaps the most disappointing or unfortunate part of Sekiro’s disposition, is that despite fans (myself included) wanting more, be it in the form of DLC, and with plenty of lore points to explore,  it probably won’t get any. Take this with a grain of salt, but a ‘verified source’ speaking to the Reset Era forum, said that FromSoftware wasn’t planning any DLC for Sekiro due to all hands shifting to work on Elden Ring.

This stings quite a bit. Even considering that FromSoftware didn’t perhaps expend as much time on Sekiro as their previous mainline titles, they still managed to create a world that feels like it has a lot of lore and thought put into it. While FromSoftware hasn’t officially confirmed there won’t be DLC, FromSoftware hasn’t even teased the possibility of anything. Looking back at Dark Souls III, it got its first DLC, Ashes of Ariandel seven months after the base game came out. But before then, there had been long-standing plans for DLC as well as teases leading up to the DLC’s release, which we see none of with Sekiro.

Unfortunately, Sekiro seems currently planned on being just a one-off experience. I and many other fans of the game would love more. Whether it be in the form of DLC or, in our wildest dreams, a full-fledged sequel continuing the events of Sekiro. Perhaps after work begins wrapping up or finished on Elden Ring, a team at FromSoftware could revisit the world of Sekiro…

Thank you for reading, on top of these columns, I also host our podcast, Power Up, recorded live every Saturday now on our Mixer channel, at 3 pm PST.