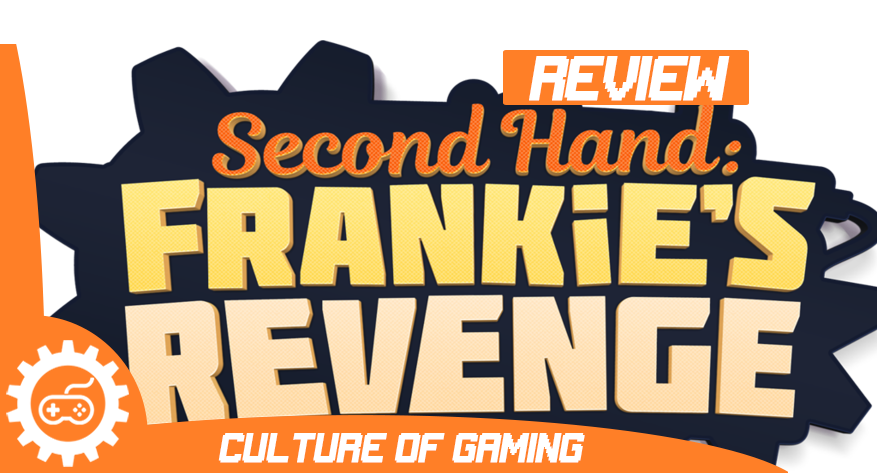 Multiplayer games are something of a hot property these days, especially since the boom in popularity of games such as Fortnite and Overwatch. Local co-op, however, has fallen a bit by the wayside in recent years. Established developers tend to forgo the capability of local co-operative gameplay for the wider reaching—and arguably more common—online play. Generally speaking, it’s the independent developers flying the local multiplayer flag. Following this trend comes another independent game featuring local co-op gameplay. This time it’s Second Hand: Frankie’s Revenge, a charming twin-stick shooter (yet not quite) from Rikodu, a studio based in Romania. So, does it stack up and is it worth your time and hard-earned money? Let’s find out.

Second Hand: Frankie’s Revenge takes the cartoony route when it comes to graphics. The easiest way to describe the visual style of the game would be if Overcooked got turned into a game about destroying robots.

The colors are vibrant, the landscapes are distinct (if not heavily detailed) and the enemies all have their easily identifiable looks, even from the top-down camera angle. Admittedly, the graphics do look a bit derivative, but for a game with a heap of action on the screen at any given moment—and up to four players—it helps reduce confusion.

The saving grace is the animation. Everything jostles around in an exaggerated manner and really contributes to the charm of the robots.

Something else that’s charming is the music. The home base has a jazzy theme that sounds a little like elevator music, but in a good way. The level themes are also calming and loop very well. The music itself isn’t dynamic, so it doesn’t change to being louder or more energetic when in combat. Instead, a more energetic version of the music comes in when an alarm sounds and enemies spawn. This means that a player can be disposing of enemies while listening to the calm non-combat level theme.

One issue is that the music is inoffensive to the point of not being particularly memorable. It’s good and well produced to be sure, but none of it stands out or is something a player will remember after a play session.

Trashy Gameplay (But Not Really)

The story is straightforward and is presented in a similar manner. Each story mission represents a part of the story, and more of the story is revealed as you complete each mission. The general gist of it so far is that aliens have controlled a heap of robots, and they’ve taken over Frankie’s world. So now, as Frankie, you’ve got to take it back. Probably with friends.

The levels are structured in a similar manner to a mobile game—with six levels and a boss level, each having a total of three stars to achieve. Currently there is only one boss level available, however there is a planned second boss character in the works. This will mean that the Early Access version of Second Hand: Frankie’s Revenge will have 14 levels in total once Le Kraque is added to the game. The storytelling itself is pretty bare bones. Most story details are given by the short and (often) genuinely humorous mission summaries when selecting a mission.

The most important part when it comes to a game like Second Hand: Frankie’s Revenge is how it plays. After all, it’s no fun to play with friends if the game feels like garbage.

Well, I’m pleased to report that Second Hand: Frankie’s Revenge plays rather well indeed. If you’ve ever played a twin-stick shooter then you’ll be right at home.

The game can be played with either a keyboard or controller. Controls are standard with the left stick (or WASD keys) controlling movement, and the right stick (or mouse) controlling where the character aims. Right and left triggers (left and right mouse click) use the right and left weapons respectively, while the right shoulder button (middle click) activates whatever special ability you have. The left shoulder button (space bar) is used for the ability of your leg parts.

The controls are tight and responsive, with no issues of which to speak. Even with more players on the field, the controls stay the same without any problem, which is certainly a good thing. One positive thing is the keyboard and the controller controls both feel natural and conducive to use, which is a huge plus.

What Am I Doing?

Second Hand: Frankie’s Revenge plays a bit strangely compared to other games. While traversing the levels, Frankie will come across hackable panels. These act on a timing system familiar to anyone who’s played Gears of War. Yes, it’s the old timing mechanic of pressing a button when a marker is in a specific white space. This works fine for the most part, however, it does present a challenge when playing solo, as being swarmed by enemies and having to focus on the timing instead of defending yourself can be overwhelming.

Similarly, at the end of a level, Frankie must escape before an explosion occurs. A player does this by picking up a jetpack, then mashing the ‘interact’ button as fast as they can. Again, this is fine but can be overwhelming when attackers are surrounding Frankie.

As for the stars, those aren’t tied to completion time, damage taken, or even lives lost. It’s solely tied to how many robots you destroy. Dying removes a chunk of your progress towards the next star, though recouping the lost amount isn’t too difficult.

So it handles well, but how does the game work?

Well, Second Hand: Frankie’s Revenge is about taking back your world from the aliens. But we know that already. It’s also about unlocking and using a heap of different parts for your character.

See, Frankie is a robot made from various bits and pieces. And to reflect that, as you level up you acquire more and more parts for Frankie to use. For example, you start off with a cutlass, but you soon unlock a chainsaw as a primary weapon. Similarly, your legs can be changed from a lawnmower to tank tracks at level 8. These all have advantages and disadvantages, and weighing those up is key to success in this game.

The lawnmower, for example, deals a large amount of damage but slows movement speed when in use. The baseball bat can hit multiple enemies, but is slow and consumes energy when used. Everything is useful, and nothing is a throwaway piece of junk, which is a nice change of pace. It’s always good to have a game where everything is a viable choice.

There are a lot of parts, but what if you don’t like how they look? How can you pursue the appearance of your dreams? Can a player show off their style to the best of their abilities?

The answer is yes, to a certain degree. Each robot part has multiple skins that can be bought with bolts. While not an extensive set of skins, they are varied enough to allow players to choose their own unique look.

The main customization comes from the home base. Between missions Frankie can move around his base of operations, and various visual aspects of his base can be customized. From the floor to the mission selection screen, all the way to the rocket you ride to leave the base on a mission. Nearly all parts of your base can have skins bought for them. For a price of course. Luckily, as it stands, the currency is only available by earning them in missions. There seems to be no shop for real money which is a reassurance.

Second Hand: Frankie’s Revenge is, from the outset, a co-op game and it does that well. With multiple players, the performance barely changes at all, and the levels do become easier with help. That said, the drop-in and drop-out feature works perfectly in testing, and there was never an issue. Local multiplayer is certainly something Rikodu got right. Online multiplayer is difficult to judge as I was unable to find others when I tried to play some online matches. That said, it could be due to timezone differences. Perhaps players in America will have better luck, or perhaps higher player numbers are needed.

The world needs more co-op games, and it’s so good to see Second Hand: Frankie’s Revenge do this well. The game plays great and, although short in playtime (on easy mode you could complete the content in an hour or two), it is a fun experience. The developers need to expand on the game’s strengths, and add more of pretty much everything to this game. The graphics and music, while serviceable, do need to be worked on. They aren’t bad, but they aren’t very standout or memorable. The animations do lend the game some charm and individuality, but currently, it’s not enough to really make the game shine on its own. Honestly, I really did have a great time with the game, even if all the little mechanics did make writing this review a bit challenging! Definitely worth checking out.

Today we take a look at a charming little co-op twin-stick game from Rikodu called Second Hand: Frankie’s Revenge. Well worth the price of admission, even with a few flaws.