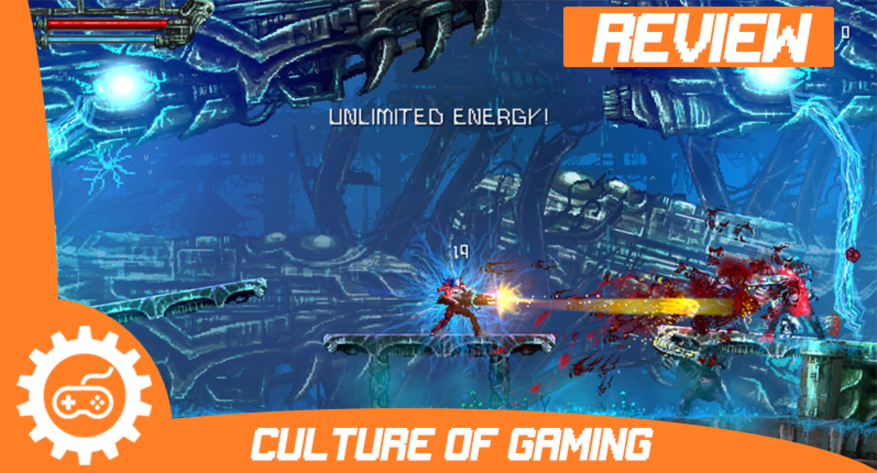 Lots of run and gun games in the current generation try to focus on what makes them different from the old run and gun games of the 90s. Valfaris, developed by Steel Mantis and produced by Big Sugar, feels no shame in letting the player know just how hardcore it is, with its tongue planted firmly in its cheek. Blasting through thousands of aliens, Valfaris reminds you of an old Contra game, mixed with an edgy Sega Genesis commercial. Complete with its heavy metal soundtrack, it’s the proverbial “game your mom doesn’t want you to play.” With its vibrant backgrounds and addictive gameplay, you definitely should play it, if you don’t mind dying a lot.

Though I Walk Through The Valley Of Death… – Weapons/Checkpoints

That’s as good of a place to start as any when describing Valfaris. One of the achievements you get right off the bat includes “Get Used To It,” which you receive for dying once. Though I ended up dying over a thousand times, I never got frustrated while completing Valfaris. This is due to three things, the weapons, the checkpoints, and education.

First of all, you have three swappable weapons you can carry at a time. Pistols, which come in many forms, use no ammunition but start genuinely weaker. Your starter pistol shoots a typical blast, but you soon find guns that can shoot lasers or wolf spirits. Melee weapons, like swords and axes, are not only great for close-range combat but also replenish your weapon energy. Lastly, you have destroyer guns, like a rocket launcher or flamethrower, which are more deadly but consume weapon energy.

Finding these unique weapons, in secret areas that you either have to jump to or destroy walls to find, feels like a reward. The problem is there is currently no level select option on the main menu. This means if you miss seeing a weapon, you will never have it for the rest of the game. I regrettably finished the game, missing one melee weapon.

Also, aiding in easing your frustration by dying includes checkpoints. Scattered throughout the game, sometimes in a hidden area but mostly in plain sight, you find resurrection idols. You can choose to spend these green trinkets at a stage’s many checkpoints to activate it. This allows you to return there once you die, much like Resident Evil’s ink ribbon system. This ensures that you never have to repeat too much of a level after your many deaths.

However, a player may choose to spend resurrection idols elsewhere. At the end of a level, the game gives you the option to use your leftover idols to either upgrade your health or trade them in for blood metals. The player can use blood metals at any activated checkpoint to update any of their weapons.

And there are many weapons to choose from. The blood metal upgrading system is permanent. This means that the game never incentivizes you to stray from your three weapons of choice. At the time of this review, there is currently no new game plus. Steel Mantis promises a new game plus, with more difficult enemies and bosses, to be patched in by the time of release.

Allowing you to use your resurrection idols however you want creates a certain level of customizability. I was perfectly content, activating every checkpoint and upgrading as many weapons as I could. This keeps in mind that I never strayed much from my pistol that shoots wolf spirits, my starter beam sword, and my trusty flamethrower. Using some of my idols on increasing my health may have avoided some deaths, but you may have forgotten that there was a third reason why death didn’t bother me: education.

Meat Grinder – How Difficulty Feels So Good In Valfaris

One thing this game excels at is, like Dark Souls, you learn a little bit from every death. It took me twenty hours to beat the game. It might have taken me three of those hours to beat the final boss, but this game’s more massive than life boss fights feel rewarding, once you learn and master their attack patterns.

That goes for the minibosses, as well. Sometimes, your achievements list is the only thing telling you that a boss isn’t the end of a level. The game has plenty of plant monsters, security systems, and giant robots for you to grind your teeth on. I did find it pretty funny that even when a boss is the same alien race as the main character, they still tower over you. If you can be patient with yourself, dodging attacks, or fending off lesser enemies, the game rewards you.

But who is the main character? If you’re worried about that, you haven’t been paying attention. Much like in Doom, the protagonist of Valfaris: Therion doesn’t need much of a reason to turn everything into blood and guts, though he does have one. It feels exhilarating to turn aliens into nothing but goo and limbs as a pissed off spaceman with long hair. I wish the game had a two-player option like Contra. I wouldn’t even mind if player 2 were just a palette swap of Therion.

Rocking out and banging your head after killing the boss at the end of every level, personality oozes from every pixel of Valfaris. Especially in the standards themselves. You find yourself in forests, underground hives, tombs, and even driving your mechs. Even if you would assume some of these locations might be dark, an electric color scheme coats the Sega Genesis era graphics. Sure, some of the secret areas can be difficult to find, but I suppose that’s what makes them secrets.

Is Valfaris A Rock Legend Or One Hit Wonder? – Verdict

Though the whole game took me around twenty hours to beat, most of the time was spent learning patterns. Valfaris is a rush, and the replay value cannot be denied. The game was built for speedrunning. There is even an achievement for beating the game in under two hours. Some may also wish the game was longer, also though I thought it was twenty hours well spent.

With its heavy metal soundtrack, Sega Genesis attitude and graphics, and Doom inspired weapons and gore, Valfaris is for anyone aching for a great run and gun game. It may not do much to further the genre itself, but it is still a fantastic old school game. Minor annoyances exist, like having no level select or two-player option.  But don’t let any of this get in the way of what is perhaps the best run and gun game of 2019.

Valfaris is available on PC and Switch on October 10, PS4, on November 5, and Xbox One on November 15. If you want more reviews from me and the rest of the awesome people here at Culture of Gaming, you can find more at OpenCritic.com!

THE BAD
No level select means all upgrades are permanently missable
The permanent nature of powering up your weapons means you have no reason to experiment
No two player option, though the game seems made for it

Valfaris doesn’t try to be anything it isn’t. This heavy metal inspired run and gun might turn off some at first with how tongue-in-cheek hardcore it can seem. Turning away from Valfaris’ over the top weapons, gore, and locations is to deny yourself of an experience in which patience in learning boss patterns is highly rewarded. If you’re a fan of Contra, Doom, or even just 90s attitude do not miss Valfaris.