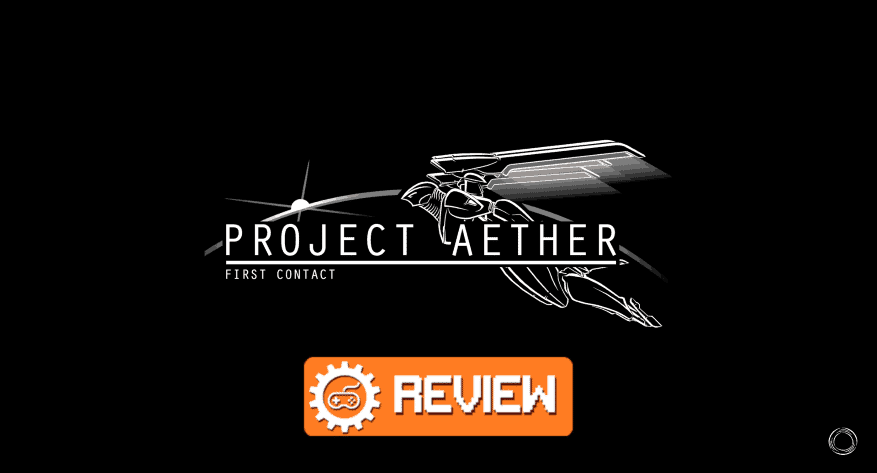 Usually, when we talk about the production of games that got their funding on Kickstarter, we do not usually hear much from those who are less fortunate. It can be a shame too since in a way, developers that continue to push forward in spite of not getting the funding they were hoping to get means that they still want their dream projects to become a reality. In this particular case, the dream of Sleepy Spider Studios was to have a fresh new take on the twin-stick shooter: Project AETHER.

While it might not look like the most engaging title out there, it can be rather shocking to find out how much you can get for the asking price, Project AETHER is actually a rather welcoming game for both newcomers and fans of the genre and can be a fun title to enjoy when you want to have a quick adventure to enjoy.

Story is… certainly something…

It can be difficult to talk about the story for Project AETHER since it can feel like an afterthought for the length of the game.

Taken from the Kickstarter page:

During the maiden flight of the prototype mech AETHER, a sudden communications blackout leaves your home planet cut off from the rest of humanity. In the ensuing confusion, an unknown fleet suddenly appears from the depths of space. With humanity’s defenses failing to contain the threat, AETHER is forced into action.

Usually, when it comes to the games within the Twin-Stick Shooter genre, the last thing you would play the games for would be the story itself. Outside of a simple “Call to Action” there isn’t really much in here that would keep you engaged. Aliens are invading and you need to blow them all up with your mecha. That’s really all there is to it. Nothing against Project AETHER’s story, but one could say these are a dime a dozen plot.

To go with the slight issues of the story would be the other complicating facing Project AETHER which is how voice acting isn’t anything special either. The fact that there is even voice acting with proper dialogue between characters is nice to have, but there can be times where it can feel like someone is just reading a line rather than expressing it. At least the leads can be fun to listen to but then you have other characters (like a group of survivors you’re sent out to save), sound less like they are minutes away from death and more like death would be like an inconvenience to them. A fair effort, but again, chances are you’re not playing for the plot, and that’s where this game begins to shine.

The Power of the AETHER

The AETHER you pilot has access to a wide range of abilities. During missions, you can swap between a primary and secondary to take down enemy waves. You can’t use the weapons forever, you can still use it for a fair amount of time if you wanted to. Whether if you choose to swap to your other weapon, or reload so you can keep firing the same equipped gun. You can use the dash to move around faster and dodge attacks while also having access to a beam saber to attack enemies up close. In a sense, you are given plenty of tools at your disposal to take down enemy units, and while they can be overwhelming at times, you also have one extra move to help even the odds.

The special feature of your AETHER is how it can use an EMP. While you can use your weapons to blow up enemy units left and right, you can use EMPs to take them out fast. The trick is with the weapons you use where the more damage you do, their energy field gets bigger. Once you’re in range, you can activate the EMP to not only destroy them and gain an additional ability with it. When you start off, the EMP will cause their ship to explode and damage other units around them, leading to chain explosions. Between the weapons, the melee attack and the EMP blast, you will have more than enough options available to you to take down the enemy threat.

Overall, the controls themselves weren’t too difficult to master. If you enjoy playing with a controller, you’re more than welcome to use one. Or if you want to go with the mouse and keyboard that option is open to you too.

Fixing up your AETHER as you see fit.

As you clear stages, you can have the ability to unlock new weapons and abilities to use. You do have your standard set of weapon unlocks, but you can also change how your Dash and EMP work too. You’ll likely have no problem with the default set up you get at the start of the game, but the different abilities can make it where you can dash into enemies for damage, or allow yourself to perform stronger attacks with your EMP. There isn’t a whole lot to pick from as there are only six and three different choices for EMP and Dash. If you that you need to be more defensive, set up a shield to block a shot. If you want to mow down enemies, you can use the power up to take enemies down faster. You can change up the color of AETHER too.

If you play the game’s story from start to finish, you’ll likely have all the customization options available to you within a few hours, while some of the color variants can be earned through achievements and Trials. Each trial you unlock gives you the chance to complete special missions with specific circumstances such as using one particular weapon or taking down a boss as quickly as possible. These can be a challenge, but a fun way to learn the game since they can certainly beat you up. And if you want, there are additional modes too such as boss rush and survival. While the game might be short, there’s no denying there is plenty of replay value here if you are someone who wants to have everything sitting with an S rank.

A Fine Introduction to Bullet Hell

If you have seen Bullet Hell styled games in action, you know how they can be rather unforgiving. One-shot and you’re dead. In the case of Project AETHER, you won’t have to worry too much about that.

As you fight through waves of enemies, you can take a couple of shots while fighting back. Usually, it would take a good ten or shots before you go down, but you do have the ability to repair the AETHER a few times before that happens. If you are someone who was interested in the genre but feels too overwhelmed by the projectiles flooding the screen, you can take the easiest difficulty which will give you 99 lives to work with while attacks won’t hurt as much. But if you do want a challenge, you can have those harder-hitting enemies while having little to no lives to work with. It does ease you in and you can change the difficulty at any time. At its default setting, you will certainly enjoy the challenge it provides.

As for the missions themselves, they do start off a bit slow at first to start bringing enemies in slowly before they start flooding the screen. Besides enemies that will attempt to shoot you down directly (or indirectly), there will also be enemies that will try to ram you down or ships that can connect energy beams to each other and have you run into them. You will get to that point where you will have to dodge their attacks while using the EMP to keep yourself alive and performing combos to earn that high score. It can be fun to try and keep that combo going for as long as possible before you take a hit and it immediately resets.

If you were to go digging to find a diamond in the rough, Project AETHER definitely is one of them. While it can look rather lackluster at first, When you get into the later levels, you can see the hard work that was put into this game to bring something new and exciting. For what it offers for the price tag it has, you can certainly find plenty of enjoyment in this game for the short story it has. Once you finish it though, you find yourself going back in to tweak your build and set up that perfect weapon combination to take down enemies and bosses as fast as possible. Even the bosses themselves can be a blast since you’ll find yourself working hard to chip down their health while avoiding the bullets flooding in.

Is this Genre defining? Far from it. The game does look nice for what it does and the levels can be fun to look at when you’re on the planet surface. You can even go into the Codex to see the fair amount of detail put into all the models in-game as well as enjoy its soundtrack in the music room.

What it is though is a step in the right direction. It isn’t to say that every game needs to be mind-numbingly difficult to be fun but to have that option open so all players of various skill levels can come in and enjoy the game certainly makes it more than enough to be a recommendation. If you are someone who loves the twin shooters and dodging bullets, Project: AETHER has you covered. Be sure to check it out and enjoy it.

Thank you very much for reading

For more reviews, be sure to follow us here at Culture of gaming and you can read even more over at Opencritic.com. Project: AETHER was developed and developed by Sleepy Spider Studios. If you go to Steam right now, you can buy the game at 15% off between now and March 2nd.

Project AETHER may look rough, but once you get into it, it can be a great example of how to evolve the twin shooter Genre. It might not be that revolutionary, but if you are a fan of the genre (or have a passing interest in it), it can be an enjoyable experience of players of all skill levels.