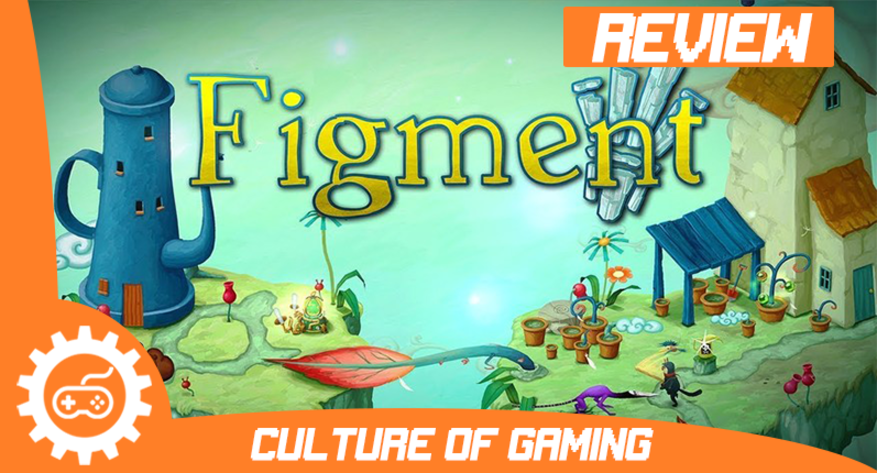 If it weren’t for the toy box-like music and storybook animation during the title screen, you might make assumptions about Figment from its opening sequence. You may assume that you are in for a harrowing dramatic adventure. But the whimsical aesthetic of a children’s book is exactly what Bedtime Digital Games had in mind for their delightful and casual-paced adventure through the mind, Figment.

Figment is by no means perfect, however. Could it be too casual for its own good? Read on to see if Figment triumphs with “mind over matter”. Or if, looming over the game, there is too much subject “matter over mind”?

Figment Of Your Imagination: Story

In Figment, you play as Dusty, a slightly overweight man in a mouse costume ripped right out of the game Tearaway. Dusty personifies the brain’s courage. And seeing as he’s been unemployed for a while, he’s got a bit of a gripe with the rest of the brain. Dusty’s attitude could be described as Bert from Sesame Street, if he had been out of work for years and blames Sesame Street for not providing him with more jobs.

Not even his bird buddy, Piper, can get him off his butt. Dusty doesn’t even want to save the mind from a group of fears that have escaped, until their leader (a particularly nasty nightmare) steals his most treasured item. As the two chase down the fears, Dusty must learn to care about more than just himself if he’s going to stop the fears from becoming intense traumas.

Facing Your Fears: Subject Matter and Who It’s For

Figment dances with serious subject matters such as trauma and overcoming fear. But due to its aesthetic, there’s only so much it can talk about without getting too deep. If you go to Bedtime Digital Games’ website, they call Figment a family game. And other than a few choice lines like “Let’s get the bastard,” I would agree.

But labeling Figment for all members of the family can feel at odds with the contrast between its difficulty and its subject matter. For a point of reference, the indie game, Celeste is challenging. And it’s about overcoming self doubt.

Figment, on the other hand, is about working through traumas, but it is pretty easygoing. And the musical villains are played for laughs, rather than anything to actually be afraid of. For that reason, it wouldn’t be difficult to recommend this game to preteens all the way up to young adults. Any younger and they might not grasp the weight of how trauma affects the brain. Any older and they may dislike how Figment can pull its punches at times.

Which is a bit of a shame, because Figment is a very charming game. Each section of the brain you encounter has a distinct personality to it. Freedom Isles is bright and green. It’s full of music and creativity. Clockwork Town, by contrast, is mechanical and angular. Here, you must solve puzzles based on timing and getting a train of thought moving.

The few characters you see have such personality that it’s just too bad that most of the characters you encounter hide behind closed doors, not allowing you inside. Animation comes at a cost for any video game, and Bedtime Digital is an independent developer. But besides the enemies, the only representatives we are treated to are the mayor of Cerebrum City and the previously mentioned train of thought. It was pretty fun getting him from one end of Clockwork Town to the other.

Endorphins To The Brain: Vibe

And that’s what Figment is all about. Despite its seemingly intense subject matter, it’s just a fun, chill time. The challenge is not going to bend anyone’s brain, but it will still make you think. But while Figment may be about getting through trauma, it’s not a game that is going to stress the player out.

One of the only stressful aspects of the gameplay seemed to be that Dusty moves too slow at times. There are times when you know what you want to do, but Dusty is too slow or the moving platform you need is taking longer to get back to you than you would like. But over all, Figment is all about solving environmental puzzles without punishing you too hard if you mess up.

I Used To Remember How To Do That: Gameplay

These puzzles involve finding batteries, elevator plates and turning valves to help you proceed past certain obstacles. Doing so lets you catch up with each of the three fears in three different sections of the brain. Each location and each fear you chase, both affect the puzzles you must solve to proceed.

For example, the first fear, known as Plague, loves to spread poison gas across the stage which you cannot pass. Lucky for you, you are in the bright and green Freedom Isles which possesses lots of windmills that can blow the gas away. The puzzle then becomes about figuring out how to activate them.

Be warned, however, that you might miss optional collectibles that you may wish to go back for later. If these collectible “memories” take a battery or plate to reach, it could be more tedious than necessary. Once you beat a section of the brain, all of the batteries you used to get there disappear while the path remains open. My least favorite part of this game, albeit self imposed, was going back for items I had missed after completing the area. And other than a PSN trophy and a complete-looking circle of memories, had no real reward for my effort.

That Song Stuck In Your Head: Music

One of Figment’s most prominent features is its music. The soundtrack is overall excellent, and I recommend you go to Bedtime Digital Games’ homepage or YouTube page and listen to the soundtrack to get an idea of what you’re in for. The whole soundtrack is even available on Spotify if you have a subscription. There is bound to be certain songs you like more than others.

The reason why music deserves its own section in this review is because of the way the game treats it. Often, you find yourself needing to attack or dodge an enemy to the beat of the tune playing. It’s actually a pretty cool mechanic.

As I mentioned in a previous section, the bosses of the game all have songs they sing. This happens as they intimidate and escape from you, but it also happens as you fight. The game uses these songs to make the subject of trauma more palatable to the average player. But as mentioned before, it can backfire, making the fears appear more as goofs than actual imposing figures.

And my gosh. Plague’s songs are just grating to listen to. Though, it was probably intentional, it doesn’t make his screechy talk-singing any less annoying.

Other than that, going back for optional collectibles was when a previous music piece I had liked began to grate on me.

Bedtime Digital Games filled Figment with so much charm and whimsy that it’s just a shame there isn’t more of it. Before I knew it, I had captured all three of the escaped fears, and my journey was over. I found myself wishing there were more to the ending. But there isn’t.

But as I’ve stated numerous times in this review, Figment isn’t really here to make you think too hard. The subject matter makes it seem like there should be more weight to everything, but its chill pace contradicts this.

While it can be too slow at times, with its leisurely pace and cool music, it’s up to the player to decide if they think the game is “chill” or whether it’s shallow of content. And as I wished for more challenge at times, both in content and message, I wavered between the two. And ultimately, that’s what’s on my mind.

Figment is available on platforms such as Steam, PS4, Switch and XBO. If you want more reviews from me and the rest of the awesome people here at Culture of Gaming, you can find more at OpenCritic.com!

THE GOOD
Beautiful artwork.
Great Soundtrack.
Great difficulty curve. Puzzles are challenging but not too challenging.
Interesting characters you want to know more about.

THE BAD
Holds back when dealing with the subject matter.
With such great locations and characters, it could use more of both. More than three of each anyway.
Slow moving protagonist making backtracking tedious.
Plague’s voice.

Figment is wonderful when it lets loose. The fantastical locations are ripped straight from a children’s book. You get a real sense of the relationship between the protagonist and the brain. There will be at least one piece of music that any type of person will really like. It makes you wish they didn’t hold back in making the locations feel more lived in.

It is also easy to become torn about the simplistic message of “Just believe in yourself, and you too can work through intense trauma.” The aesthetic of the art and sound design works so well, that the message just feels off. This, mixed with a slow moving protagonist, makes this wonderful game go from great to really good. It is easily worth a recommendation.