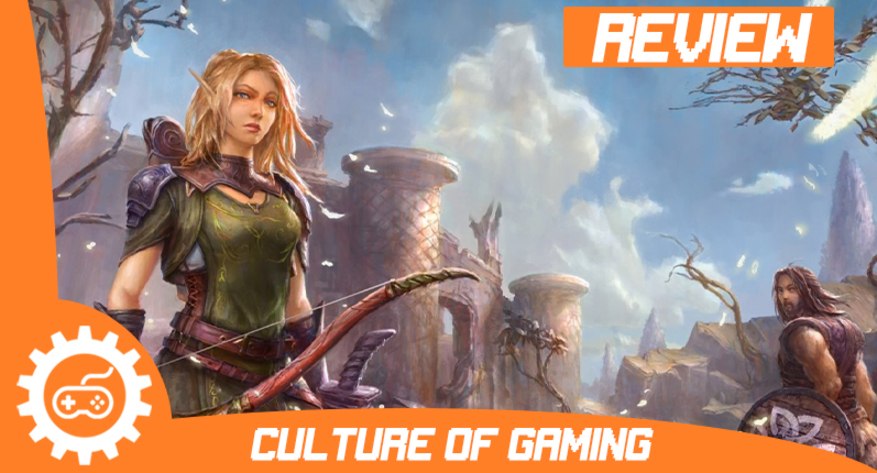 When you go online to buy games digitally, you often come across independent game makers that love to pay homage. They pay homage to game generations long since passed. With love letters to the NES, SNES and Genesis abound, it’s less often that you see games in tribute to the PS2 era of games. Developer: VOID Studios’ Eternity: The Last Unicorn does just that.

In a gameplay style, reminiscent of games like Onimusha and the original Devil May Cry, Eternity: The Last Unicorn is a hack and slash RPG that sees two unlikely allies working to explore the realm of Vanaheim and defeat the evil witch cursing the land. This sounds like a simple enough premise. But this brings up an aspect of the game that could be an asset or a detriment. It all depends on who you ask. Eternity: The Last Unicorn is filled to the brim with lore inspired by Norse mythology. And while I found the storytelling and world of the game enjoyable, there are dark sides to the game’s strengths that could very well be its own downfalls.

As already mentioned, the story is chock full of lore about the world that your two protagonists, Aurehen the elf and Bior the Viking, inhabit. You could get enraptured by Aurehen trying to save the unicorns from extinction thereby saving the elves from the same fate. But this gets rather difficult to do when the game tries to present a grand epic story with such little production value.

I will go more into this in later sections but in terms of story. The entire game is littered with long load times. You may ask what long load times have to do with the story, but it’s actually quite a lot.

During every moment of your long load times, you find the same wall of text for the area you are in, for you to read at your leisure. This can be somewhat interesting except for the fact that every time you die in an area, you get the same text over and over. And even if you are so talented that you never die, the characters often revisit areas anyway. And you are presented with the same wall of text, just counting down the seconds upon minutes until you can continue again.

All of this said it should still be stressed that the game does offer an interesting world and story that can be enjoyed if you love Norse mythology and stories set in the same type of world as Lord of the Rings. And it is quite nice that there are journal entries on every place and character you could wish to know about.

An Era Long Since Passed – How The PS2 “Tribute” Holds Up

It was said earlier in this review that this game is a tribute to PS2 era action games like Devil May Cry and Onimusha. What I didn’t mention is that VOID Studios may have been a little too faithful to this era. There is a reason why people do not tend to go back to the PS1/PS2 era. It’s difficult to use the lack of modern graphics and modern 3D sensibilities in a way that works.

The poor production value not only plagues the story but also the presentation as well. Eternity: The Last Unicorn’s storytelling is hindered somewhat by having no voice acting whatsoever. That’s not so bad. I can understand why a studio looking to make a name for itself may want to focus its resources more on gameplay than dramatic epic scripts acted out by voice actors.

But you also find yourself having to be reminded of what game you are playing when a small cutscene plays before a boss fight. The animation is stiff and lifeless. With one dead-eyed expression plastered on the characters’ faces. This aspect is very reminiscent of Goldeneye for the Nintendo 64. And it’s a shame too, because the journal entries, mentioned earlier, show very clearly how beautiful or weird or rugged they intended a character to be. But instead, the actions in the cutscenes are performed by emotionless golems.

A World That (Literally) Eats The Player Alive – Presentation

At a certain point, the presentation truly becomes inexcusable. Especially when these cutscenes (and sometimes during gameplay) you find your protagonist clipping through the scenery. It is one thing to replicate the things we loved about the good PS2 games of the era. But the longer you play Eternity: The Last Unicorn, the more it becomes clear that it could have used more time in the oven.

At a certain point in my journey, I came to a difficult boss fight which involved the boss teleporting above me. There is no camera control so if the boss is out of range, you can’t aim at him. On more than one occasion, he just never comes back down again, forcing me to restart the fight. Which involved the long repetitive load screens mentioned earlier. Bringing up the frustration of the single camera angle per screen seems like a good reason to talk about how it plays.

An Adventure Told From A Certain Angle – Gameplay

Despite everything that I have said so far, you can have fun with Eternity: The Last Unicorn if you know where to look. Each attack might be the same motion animated over and over. The lack of control over the camera might lead to some unnecessary deaths. Heck, even the variety of weapons may be lacking, but the game is still fun. Some of the most fun I had playing the game involved uncovering new areas in locations I had already visited.

The entire game exists on one map. If you take the time to consider the whole game, it feels rather small. But to make it more interesting, you often get a new key or item that allows you to unlock new paths. One of the best feelings you can get in the game includes returning to something you couldn’t access before, albeit accidentally, and being able to open the path.

As mentioned earlier you play as Aurehen the elf, with her upgradable sword and bow. You also play as Bior the Viking, with his upgradable swords. Though each has special abilities that the other does not, they play rather similarly. For example, Aurehen can uncurse people and Bior can use a shield.

They both slash their swords at swarms of enemies. They both dash to evade attacks. And frustratingly enough, they both can get ganged up on by these swarms in ways that feel unfair.

There may exist comparisons to Dark Souls as you play. The style of boss fights can feel similar. Sometimes it’s best to just rush by enemies rather than engage. But on the whole, the gameplay is a much shallower experience. For example, there doesn’t seem to be much enemy variety.

Eternity: The Last Unicorn prides itself on being an RPG as well. But really, the only things to consider are whether you want to level up your main weapon or secondary weapon. Other than that, you just level up naturally.

Should This Be The Last Of The Unicorns? – Verdict

Eternity: The Last Unicorn has a lot going against it. At times, it can remind you of the bad aspects of certain games from the early PS2 era. But that’s not to say it’s irredeemable. The interesting story, world exploration, and clear love of the Norse source material left me saying one thing. “You had so much more potential.”

But if you temper your expectations, Eternity: The Last Unicorn can be a fun time.

The game is available for Microsoft Windows, Xbox One, and Sony PlayStation 4.

For more Culture of Gaming, reviews tune into OpenCritic.com.

THE GOOD
Fun world to explore.
Deep lore inspired by Norse mythology. The passion shines through.
While basic, combat and bosses can be fun.

THE BAD
Long load times.
Have no control of camera, leading to unnecessary deaths.
Shallow gameplay and RPG aspects.
Lifeless characters.
No voice acting.
Glitches ranging from small environment clips to being forced to reset.
No way to skip story, even if you wanted to.

Eternity: The Last Unicorn reminds you of some good aspects of the PS2 era of action games. Unfortunately, it reminds you far more of the negative aspects. Frustrating controls, camera angles, ugly character models and more plague this game. That said, if you love Norse mythology and settings that remind you Lords of the Rings, you can have a fun time.