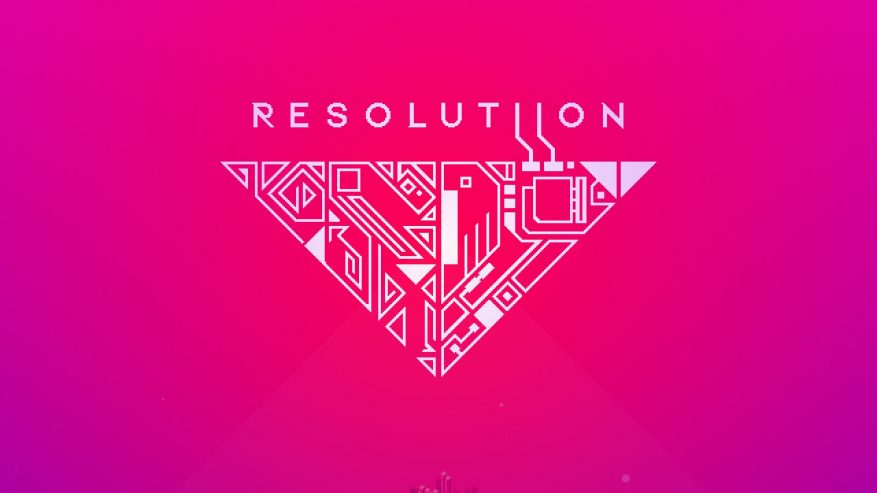 The developers at Monolith of Minds have crafted a fast-paced cyberpunk bass fueled game that will give you a challenge and make you fear cats just a bit more then you like. Resolutiion is set in a very disturbing future, where you play as an old killer guided by an A.I named Alibii. You run through the harden dystopia, picking up pieces of your memories and gathering interesting weapons. These weapons not only help you fight the cult-like fanatics and strange machines strewn about the land but also tear through terrain that blocks your path. While you’re fighting through bosses and puzzles jamming to a crazy good core rattling cyberpunk beat, one question remains uncertain. Are you the true hero or the real enemy of this world?

Right off the bat, you can tell this game had a lot of hard work put into it. From the music to the pixel art, the developers worked their fingers off to provide a very immersive game for its audience.

Come For The Fast-Paced Combat, Just Stay Away From The Cat

Let’s start with the gameplay. As for controls, it’s pretty simple and pretty fluid. You get a three-part basic attack move and a sleek dash move. The combat in this game is intense and gritty. Don’t test these enemies, attacking them takes timing and pattern watching. Giving players the option to play with a controller is always a plus, and you’re able to modify key bindings to your liking. Once weapons are picked up, they stay in your arsenal, ready to be aimed or dropped for various uses.

Your guide offers helpful advice, a digital map and more, but interaction with the world around you guides you as well. In the preview I played, the player is asked to save some zealot monks during a side mission aside from your main quest to find the truth. The game doesn’t take much time to spell it out for you. Instead, you’re thrown pieces of a dark story that propel you forward into a crazy abyss. Before the monks, you’re asked to suppress some fanatics for a distorted humanitarian cause… Yeah, this game is pretty entertaining. You’ll find yourself trying to figure the reason behind the philosophical dialogues. I felt as if my interpretation of the many unique interactions, guided me towards understanding what really is the greater good in humanity. That in itself is what drew me into the story—trying to figure what it all really means and what is actually going on in this dark era.

Now we dive into the art and music of this game. I am a pixel art junky, and for any of my fellow pixel art enthusiasts, I will say the pixel art in this game is phenomenal. Resoultiion looks like it took five years to make, and it did! Animations are smooth and unique for the characters. The colours for every area are unified and even mesmerizing at times. Your eyes are drawn to the details, and the more you look, you’ll see a more magnificent piece surrounds it. I loved the free-floating health and stamina bar, the minimalist design of the main character, and the animation detail of everyone’s attack moves.

While you’re revelling at just how much work was put into the art in this game, you feel your mind start vibing to a heavy cybernetic bass, like seriously the beats go hard in this game. The first boss battle music sounded like a cyberfunk Asian fusion beat, and I was impressed. Not only did I not feel like I would get tired of it, but it also set the tone so well, I found myself pretty immersed and driven to move forward. When one part of the level began shaking with the music going, I started to feel very overwhelmed in a good way; this game was getting to me.

Now, this is an excellent game that’s about to come out, but of course, every game has its flaws. For one, there’s no jump mechanic, but for a top-down game like this, it’s not needed, just noticeable. The combat is very chaotic but enjoyable as it’s not repetitive. However, for someone who lacks skills for games like this, It can become frustrating dying a lot. That’s why I also think this game feels better played with a controller. Aiming your weapons looks more fluid, and your dash move can be curved more heavily. I feel like that’s why the game may be harder for keyboard players.

Finding save points in this game is also critical because it serves as a respawn and heal station. It even starts you off at the last enemy you killed, saving you from having to run through the same enemies over and over again. This detail could be a compromise for the few spawn points there seem to be, which was also a concern I had.

For me, this game was somewhat too hard. I’m not a big beat em up gamer and found myself wanting to quit half the time. However, for others, I know this game may be a refreshing challenge, and honestly, I’m probably just better off on the controller. I have the reaction rate of a sloth, so don’t mind me too much, but don’t say I didn’t warn you.

Final thoughts, well, this is a knockout game! The pixel art is amazing, and the story easily piques interest once you step out into the world. The controls are easy enough to grasp, and the combat is fun once you get the hang of it. For someone who isn’t keen on fast-paced combat, running around the dystopian land and interacting with the environment may offer enough to reel you in. From what I can see so far, it’s possible to dash around enemies to beat certain missions, so why not try? Did I mention there’s a giant kitty?

Want more reviews head on over to OpenCritic, and take a look around!

Slash through dystopian enemies to emotion-filled cybernetic beats. The pixel art is beautiful, you’ll appreciate all that the developers put into this game. Resolutiion is a challenge that is worth the try, and again there’s a giant kitty!

Hello! Hope you're having a super day! Some facts about me: I'm a Georgia Southern University Graduate #hailsouthern, My family is Caribbean My favorite food is Cheese I'm Lactose intolerant... I strive to be an efficient and commendable source of information. I want to be the go-to gal or just an endearing voice to listen too, whatever you need while providing rich, engaging content. Don't be afraid to say hello!