He does more things now like writing and video content… Still, our streamer that doesn’t stream much. Nowadays, you can find Matt, writing reviews & on the Power Up Podcast as well as on our affiliate  Tech YouTube Channel Tech For Thought! 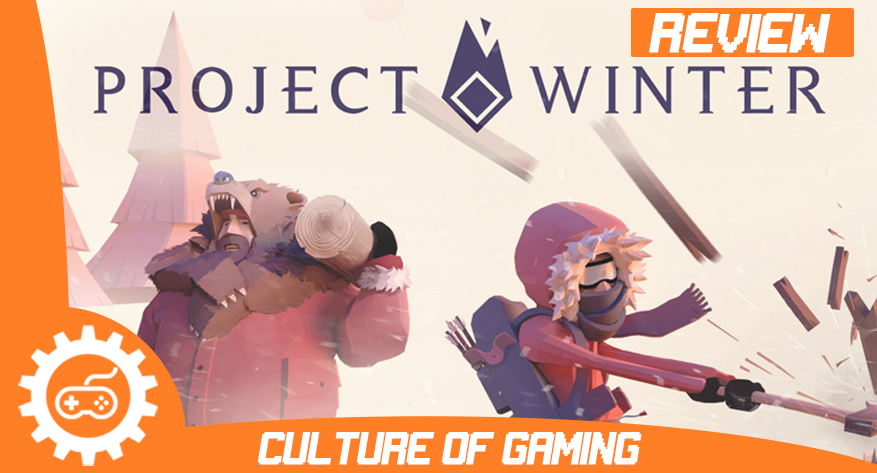 If there was one word I would use to describe Project Winter, it would be polished. There are neat little details that make the game feel more than complete. The way the music fades when you tab out, how your snow track slowly disappears over time, all of it has this level of polish most AAA games are missing nowadays. It’s just refreshing. So, from me personally, thank you Other Ocean Interactive. Thank you for putting love and care into your game.

In its basic form, Project Winter is a Trouble in Terrorist Town style game. But the creators have decided to add a couple extra layers onto it. Specifically, survival and crafting. These aid to the game quite a bit, giving some breathing room for the traitors to act while the others focus on their survival. Your smooth-talking skills make a difference as well, because if you can talk yourself out of a bad spot, or convince the others for you.

So make sure to build those relationships, because that teamwork is vital. Seriously, you can’t even complete the first objective without two other people complying. After that point, having teammates that can help gather materials and food for products to aid your survival. Unless you are a traitor.

If that is the role you are blessed with, the goal is to kill everyone. This will come at any cost, even if it means sacrificing yourself. With the ability to craft weapons and traps, there are a plethora of option at your disposal, going as far as sabotaging the distress beacons and radios. Get creative.

There are a few things that could be added in to make the game whole, one being a training mode. Either that or instructions of how to play the game. There is the cinematic when you boot it up for the first time explaining how the game works. But outside of that, it is a trial by fire. It was not until the second or third game that i learned you could craft items.

Another nice addition would be some variance when it comes. To give you an idea, the map is made into a three by three grid. In the center being the cabin with each grid point possibly containing one of the several objective points that need to be repaired. It would be nice to see some different objectives that do not just consist of bringing items to a point to complete an objective. Doing this over and over does grinds down the replay-ability. I don’t exactly have an idea of what could be done, but I know these devs have the creativity to come up with something.

With its low poly art style, Project Winter is not going to make your computer sweat at all. But it does not take away for the experience. Instead, it adds to it the game in a very nice way. Allowing the creators to crank the lighting abilities to perfectly fit the scene. Giving the game an extremely refined look that stands out from the typical 2D pixelation of the Indie community. And when you think the top down view limits the feel of things, there are checkpoints scattered throughout the map that gives you the opportunity to see across the snow-covered expanse. Leaving you with a view that is screen saver worthy.

If there was one thing I could gripe about, it would be the faces. But even then, the faces have a reason for being the way they are.

And with the freedom given to you to create your own custom character, you can make an avatar who will become synonymous with you(mainly due to how small the community is). And with the ability to unlock cosmetics through achievements in the game, there is a sense of satisfaction when other players recognize your achievement. Akin to the recon helmet in Halo or the red tiger skin from Call of Duty 4. Yes, there are loot boxes for cosmetics, but, none of the boxes, from what I can notice, have any of the outfits that come from the achievements, and, you can’t buy them with real money. A very welcomed change of pace. However, you can buy the cosmetics from cases off the steam community market, along with trading them. The achievement items being exempt from these actions, a nice touch.

Everything sounds crisp. From the strums of the guitar to the wind whipping around your head. The sound effects for everything also have a high level of polish, just like the rest of the game. Communications are also one of the clearest I have had the pleasure to experience in a multiplayer game. Other Ocean have also included the feature where the voices of other players fade the further you are from them, eventually leaving you with nothing but the sound of your footsteps and the cold air racing around you.

I honestly only have one complaint in this department. When other players move away from you in any direction, the audio tends to favor one ear over the other. Not an issue off the bat, until you see players moving to, for example, the lower left of the screen, and the sound is only coming from the left ear only. Its disorienting to say the least. I don’t have a solution, honestly. But it is something that if it was changed for the better, it would be the icing on the cake.

Going back to the community comment from earlier, yes, the community is small. But they are very dedicated. Out of all the games I have played, it did not take more than 10 minutes to find a game. Quite the feat for an indie game that requires up to eight people to play a game. When finding a game, you have the chance to meet one of the developers actually playing the game with the rest of us. A welcomed sight to say the least.

In addition, the people are very nice a willing to talk and teach, helping the time pass by. It’s a good thing they like to talk as well, because teamwork is crucial in this game.

Sadly, with a small community, people learn who you are, and your tactics. So, make sure to change up your style rather frequently to keep people on their toes.

If you want a well-crafted game that has an amazing community, this is the one for you. Heck, even if you are not exactly sure about the game, give it a try. Because the only thing that can make this game better, minus the couple I stated before, is a larger community. So, give it a shot.

If you liked this review, check out Open Critic to find more reviews from Culture of Gaming!

If you want a well-crafted game that has an amazing community, this is the one for you. Heck, even if you are not exactly sure about the game, give it a try. Because the only thing that can make this game better, minus the couple I stated before, is a larger community. So, give it a shot.