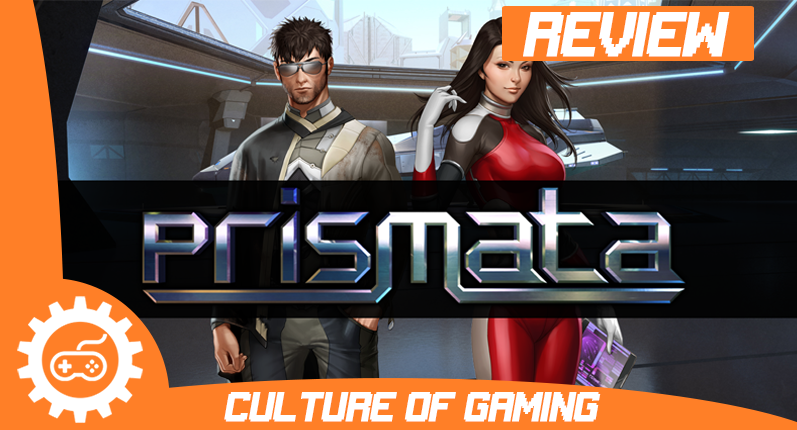 Prismata is certainly different, charismatic, and lacks charm. Sound all over the place? Well, not to those who had written the story it seems! We will be diving into the game’s mechanics and if it truly offers anything different opposed to most others of similar genre. It’s a fascinating game in that it wants to be funny, or possibly just use the campaign to create… err… something.

There is a lot to say, and yet there isn’t. It has interesting elements that make it stand out a tiny bit, but at the same time, you can make arguments between anything, like the differences in bananas you had for lunch. It’s just not as original as it leads you to believe, but it’s fun. It’s simple, but simultaneously your cards stack up like any deck builder and you’re just scrambling to keep up. This is a game that promises grit, originality, and having rewritten the rules of strategy (no, really! This game apparently rewrote the rules!). Let’s take a look and see what we’ve uncovered in Prismata.

Prismata starts out simple, you haven’t been deployed to active duty in the last 578 days, so you head to the bar. Typical protagonist stuff, but you’re called away to an incident. The character you portray, Swade, even though he clearly understood that someone has died, decides that it’s on his way to the bar. Okay… A weird introduction for the main character who we are supposed to care about. Afterwards he proceeds to ask if the guy has been “scraped off the pavement” yet. If only you were allowed to switch characters, it would feel like a win the rest of the way through. Constantly, throughout the campaign, there is nothing but a mean spirit with Swade. It begins to feel really out of place when you see that his friend, a tech geek named Logan, doesn’t even return most of Swade’s quips. It’s painful to sit through.

The story continues with robots going insane and destroying things. You have a device called the “Prismata” which is basically like a hologram tablet. The first mission is the tutorial, but it gets challenging further along. You never really find out what exactly the Prismata is or how it works, it just does. The best way to describe it is that it controls all your robotic units on a battlefield in real life? It’s not completely explained at any one point, but it works! Giselle, your personal android, is with you to help! Pretty much all she does in this campaign is act as your tutorial bot. The story itself is largely forgettable at this point and can easily be skipped through.

You can’t judge a book by its cover, but look inside for the color.

You’re probably wondering, and the answer is yes. Prismata really does look like the style of a visual novel. In fact, it looks okay. It looks just ‘okay.’ There’s nothing spectacular about it. Nothing breathtaking. If a regular everyday artist drew these, it might be more impressive with some background art, but your main character, Swade, looks high all the time without his glasses. Halfway through the first chapter in which he takes them off, you would likely want him to put the glasses back on.

The soul of this game though is the cards. The cards actually look a little creative. You get some different visuals between each one and they vary depending upon their uses. The colors really coordinate well with each other and look beautiful, allowing you to distinguish each action before you take it. The skins you are able to purchase add variation as well, a lot of it.

While the game is visually okay, the music has its simple flaws. There is this repetition about it, and each song variation is not a strong detachment from the one before it. It would have been nice if the developers used music that not every uninspired title before it used. It feels entrapping sometimes when clicking through dialog, yet is mitigated as soon as you get into battle. However, if you start to try to enjoy the music by itself when in combat, you find yourself wanting to get it over and done with. As far as sound goes, every click feels nice to the ears. In most games it’s under-appreciated, but here I like the sound when I click the “Exit” button. Music options are also basic, giving the option to raise or lower sound effects and music volume.

Decks. You build them!

Pretty much the whole premise of a deck building game is to allow yourself more of a card advantage than that of your opponents. This can include resources gathered, units built, or having a large amount of offense or defense. The more resources gathered, the more units you can build, in turn the more you can hold out. It’s all about holding your own, being on the defensive or offensive while also allowing yourself time to build up an army. Games like this can take hours if done properly. There are already numerous amounts of deck building games you’re able to play in real life with a group of friends or strangers. Prismata doesn’t do a whole lot of things differently than others of the same genre do.

You start with drones, build engineers to provide resources to build those drones, then allow yourself to build more resource harvesters, etc. Different cards carry different attacks, defenses, HP, or resources, and each card with their own purpose. One moment you feel like you’re winning, but because the opponent used their cards more wisely and built up resources, they’re found to be destroying your cards. Where does this whole “rewrites strategy” come from? No idea, it was in the game description. Does that mean this part of the game is bad? No. Far from being bad, it’s actually pretty fun. It takes some strategy, but not a lot can go into as simple of a deck builder as this one is.

What does Prismata have to keep players coming back for more? Where’s the mojo?? Skins, emotes, badges, and avatars, all of which are superficial, don’t really seem to add anything to make your deck of cards stronger than your opponent’s, which is a good thing. However, you have to question why they keep costs so high for as something as a simple emote. $4.99 for 650 shards, what you need to purchase these emotes and skins. If you do the math with most having to cost 399 shards or even to go as high as 4999 shards, you can’t really say you aren’t being ripped off here. That’s at least $35 worth of purchases for 5640 shards, if you decide to buy all at once. We shouldn’t mind so much as long as we were able to get shards through normal system rewards or progression.

There is no sign of any progression shard rewards outside of the initial 15 shards every 2 or 3 wins, or a single power core used to gain entry into an armory. The armory is terrible as well. It’s basically loot boxes, but instead you have to flip cards for a chance at them. You aren’t even guaranteed the loot from the power cores you collect to get extra skins and emotes. It’s like the whole system is rigged just to grab your money for extra content, even though you don’t have to spend any money at all for regular play. I applaud other games like Overwatch and League of Legends for the luxury of much less grind for your accessories. It shouldn’t have to take hours or days just to be able to purchase one item to customize your character with.

It has a nice premise with a good element of gameplay involved. It’s just the fact that monetization and the campaign weigh it down. It’s $25, which doesn’t feel worth it. Maybe if you were to catch it on sale for more than half that then sure. It’s a solid PvP game, but that’s all it is meant for. It’s not even that immersive of a game to keep playing regularly. For some it might be, but for others it’s just a casual game.

Nothing much else to say, but if card games are your thing then it might be for you. It’s a tough one to rate, because PvP is what this game is built for. It just needs more value and less grind. It’s polished and well-balanced, but doesn’t feel like the developers placed enough care into consumer’s hands as they should have. It was a fun time though.

THE BAD
Main protagonist unlikable.
Nothing too interesting or new.
The grind for currency is terrible.
Too pricey at release.