When I’m not writing articles I’m usually knee-deep in some obscure JRPG.

Ah, the tepid waters of the Pokémon spin-off games. A collection of multimillion-dollar-selling games that all seem to be in agreement to stay as passable as possible without overshadowing the main series they are based on. From the gimmicky fun of Pokémon Ranger to the flimsy toy box creations of Pokémon Rush, it feels as though each one sets out with the goal as if a 6 or 7 in the gold standard. It makes sense when looking at the properties’ history, as is expected of all of Nintendo’s children, being used as a testing ground for either a new console or a new periphery item (be it cardboard or otherwise) is par for the course. It’s usually the life and death of all the various spin-offs that come our way. 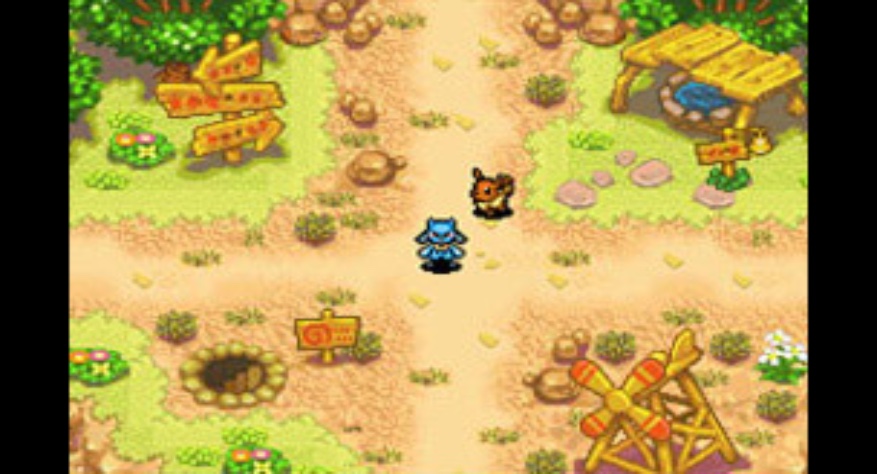 Pokémon Ranger had its short-lived twilight when the DS’s touch screen needed a circle drawing demonstration, Pokémon Snap was gone within a camera flash, and the less said about Pokémon Dash, the better. This general rule around Game Freak’s creature catching creation has one exception to that general rule: Chunsoft’s (now SpikeChunsoft) Pokémon Mystery Dungeon series.

At the Mouth of the Cave

The dual release of Blue and Red Rescue Team for the DS and GameBoy Advance started this all the way back in 2005 (yes, it was fifteen years ago). Perhaps it is fitting that the series started life on multiple handhelds because unlike the aforementioned neglected children of the Pokémon brand, the Mystery Dungeon series has lasted four generations of Nintendo handhelds with the recently announced remake of the original two, Rescue Team DX, being the latest in the enduring spin-off series.

But here’s the thing. Despite its relative success at avoiding the Nintendo chopping board and the 13 million copies sold over its multiple installments, the Mystery Dungeon games really aren’t that good.

Now before I receive the full ire of the Pokémon fandom (seriously, see the comment section of IGN’s review to see what bad mouthing this series will do) I should follow up by saying that I love these games. I’ve played every entry barring the 3DS editions and have, over various Gameboys, DS’s and emulators, played the originals countless times.

I went back to the original prior to the impending remake’s release, and I found myself hopelessly addicted to the clunky dungeon crawling, RNG recruiting of team members, and heart-melting earnestness of the games’ human-turned-Pokémon story. I missed a solid day of writing to sit in bed and grind out Mt Steel, trying to get a Skarmory on my team as I did when I was nine years old. And I imagine I’ll be booting the game up against my better judgment when this article is finished to add just a few more Pokémon to my team.

The Love/Hate of my Dungeon Days 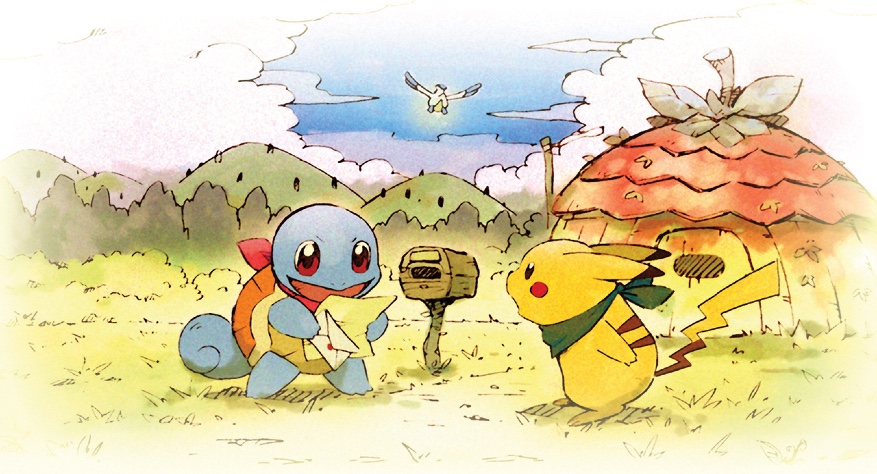 That’s all a big cover story for me to say candidly that, though I love the Mystery Dungeon games, they remain one of the most clunky and repetitive series Nintendo has produced. Even six incarnations in, the series hasn’t managed to breach 70% on review aggregates. In most of those reviews, issues complained about since the series Gameboy days have persisted unfazed all the way up to its most recent entries on the 3DS, and will no doubt be again repeated when the series makes its home console debut this year.

It’s a series with a humble goal, like the Atelier series. But just like that series, the developers don’t set out to break any new molds with each entry. Instead, the modus operandi is usually to just deliver more of it. This lack of ambition isn’t exactly a surprise; even the subtitle the spin-off series is centred around is itself a hand-me-down framework. The series started as a Dragon Quest spin-off and has been jury-rigged to fit countless series, from Final Fantasy to Etrian Odyssey. Though the series, at least in name, has mostly stayed close to its creators SpikeChunsoft, the formula has been replicated endlessly with the more recognizable entries being the bullet-hell lovechild Binding of Issac.

It’s an impressive reach considering that, again, none of the entries in this long-running series have ever been all that well-regarded. Its simple systems, repetitive randomly-generated objectives, and high levels of jank keep the formula from ever being truly captivating. Despite the 30+ hour campaigns that the games run, there’s very little difference in gameplay from the first hour to the twenty-eighth hour.

You’re still running through the same square tilemaps. Still mashing the A button. Still doing the same rescue missions that started your adventure. With all that being said… why do I absolutely adore these games? Why have I almost burnt food multiple times because I can’t look up from my screen till I’ve filled out another floor of the same brown dungeon I’ve been trudging through for the last five hours? The more I continue to replay Red Rescue Team the more I find myself likening this series to junk food. It isn’t good. It doesn’t make me feel good. I regret eating it, and yet there’s a full empty box of Celebrations next to me.

Video games, despite their labels of escapism, aren’t always devoid of those similar levels of commitment required of real-world activities. I can’t switch my brain off if I’m playing through Bloodborne again. I have to pay attention to dialogue if I’m playing through Outer Worlds. Finding time to play video games sometimes isn’t about finding the hours but finding the motivation to commit to them. Playing Mystery Dungeon feels automatic. I can play it while I listen to a podcast, I can play it while I make food; the simple rhythms of its gameplay, the lighthearted feel of its world, has a genuine calming quality to it.

Casual or relaxing games aren’t exactly a new concept, ever since Harvest Moon made farming the desired past-time for kids of the 90s. There has always been a niche for gamers looking for low effort escapism. But a clear uptake in this chillout-zone style of gaming has become apparent ever since Minecraft cast its blocky shadow on the industry. Since then games like Stardew Valley and Story of Seasons took over people’s lives with that workmanlike rhythm of mindless task after mindless task. Video game junk food. Guilty pleasures. Every person who claims to appreciate the challenges of XCOM or razor focus of League of Legends has a soft play-area in their minds that loves the mindless square button destroying of Dynasty Warriors or the repetitive quests of Destiny.

There’a real validity in the value of mindless gaming, in games that require the very minimum from our brains. Mystery Dungeon embodies that sort of doughy bread style of game design. Quests are all the same; mechanics are, if not weak, pretty irrelevant. If you asked me what quest or dungeon I undertook yesterday while I played the game waiting for pasta to cook, I could only tell you it was square. This would make Mystery Dungeon a pretty throwaway experience. Yet it couples its uneventful combat with a story that manages to be surprisingly heartfelt and poignant for a game about talking Pokémon. The tale of a human turned into a Pokémon is ingrained into the memory of pretty much any kid who had a Gameboy/DS back in the day. It’s surprising just how much that charm and story actually hold up.

Where the Wild Pokémon Are 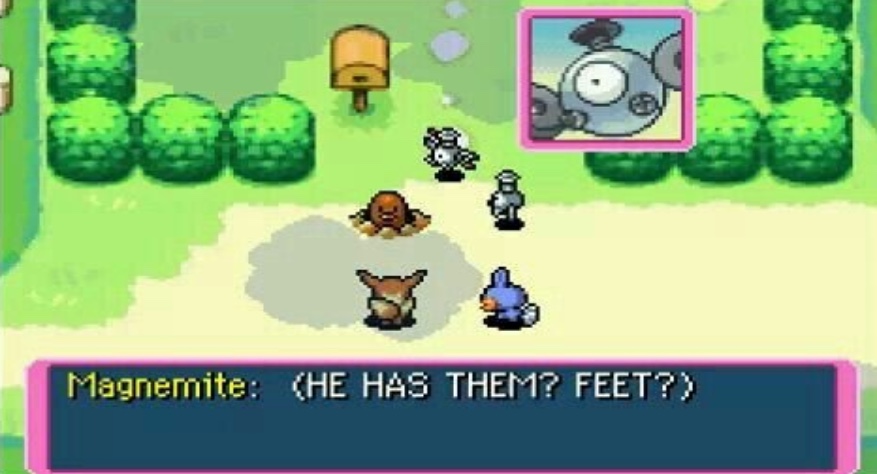 Mystery Dungeon‘s characters and world sit in this weird pocket universe of the Pokémon world where humans are mentioned but strangely never seen. Pokémon live in civilized village communities complete with Persian bankers, Kecleon capitalists, and even have their own Pelipper delivery service. (A delivery service so efficient it would put Amazon Prime to shame.) The series never really attempts to make sense of its strange world or the sudden existentially confusing detail that Pokémon are fully conscious beings with cross-species language and cultures that are seemingly ignored by their digitized pocket ball existence in the mainline series. These details become surprisingly easy to ignore when you interact with them.

This is one of the elements that has made the fanbase particularly fond of Mystery Dungeon over the years. Throughout my recent playthrough it’s easy to see why. There’s something so earnest about the inhabitants of Mystery Dungeon‘s blocky little world, from your partner Pokémon’s fierce loyalty and friendship, Gengar and his gang of crooked cohorts, and a gang of cowboy Mankey builders. It’s all relatively predictable. Red/Blue Rescue Team just ooze charm in its various characters and interactions that you find yourself playing just to inhabit its colorful world.

It has a similar effect to the aforementioned Harvest Moon series where a small cast of characters grow fonder with familiarity. As you fill out your daily tasks, new details and wrinkles are added. This is a staple of the series at this point. Games in the series are usually judged on the strength of its characters rather than the rarely evolving mechanics of its gameplay.

Playing through Red Rescue Team ahead of its impending remake, it’s encouraging to know that the game’s irreverent charm is still intact. Despite this, the series’ gameplay is still as uninspired and basic as ever. Age has only made this fact more apparent. This is a fact the upcoming remake hasn’t really made any efforts to change based on the demo. The likelihood is that everyone picking it up in March is already fully aware of this fact going in.

Despite a new painterly art style, one I’m inclined to dislike for my love of sprites, and some quality of life improvements, this will be the same Mystery Dungeon game. Even if it wasn’t a remake of the first it’ll very unlikely much else would have been changed. The reason the series has endured so long over various entries and editions with relatively the same unchanging, average gameplay. The joy of the Mystery Dungeon series is a comfortability, it’s carefree escapism. Like mowing down thousands of soldiers in Dynasty Warrior, or combining the same ingredients in an Atelier game, Mystery Dungeon is complete gaming comfort food. And, sometimes that’s all you want from any experience. As reliable as mac-and-cheese, there’s never anything new to playing a Mystery Dungeon game and that’s absolutely fine.